It seems that despite the incredible rally recently, which made bitcoin more expensive than gold for the first time, the cryptocurrency is still volatile and full of surprises.

Earlier today, the BTC/USD exchange rate suddenly dropped $100 per bitcoin in less than an hour, without any apparent reason, from around $1270 to $1170. The price has since partially recovered and is now trading around $1230.

One plausible explanation is that short-term traders are withdrawing from the market and banking their gains before an upcoming announcement on the Winklevoss twins’ first ever bitcoin ETF could cause it to swing in either direction. Tyler and Cameron Winklevoss met with members of the U.S. Securities and Exchange Commission (SEC) last month regarding their application to list on the BATS exchange under the ticker COIN, and a decision is expected by 11 March – if it isn’t postponed again. 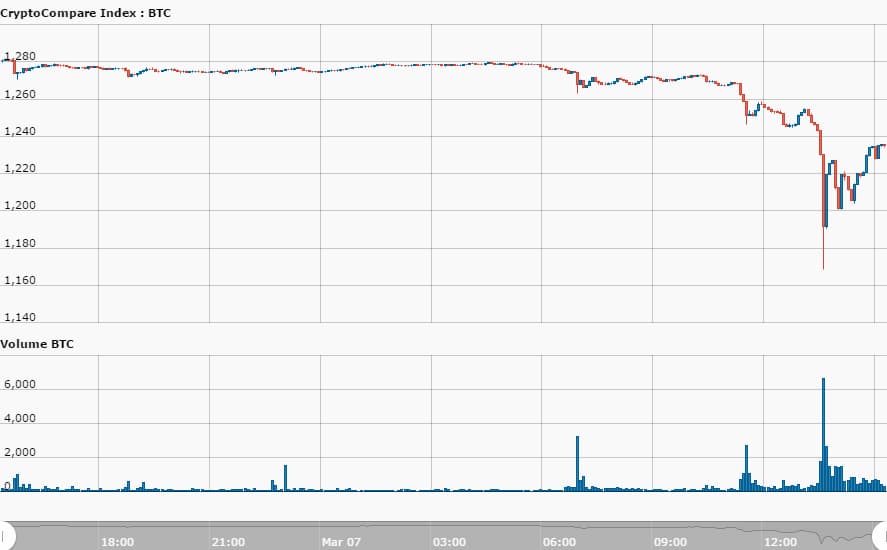 Charles Hayter, the CEO of CryptoCompare.com, explains that reports that this was linked to rumors of the Chinese central bank making its bitcoin exchanges restrictions permanent are short sighted: “The Chinese restrictions are ultimately positive and the market has proven to be resilient whilst restrictions are in place- the terminology emanating from the PBoC seems to be long term positive more than anything else – the Chinese Government is looking to regulate in a nurturing way not a blanket ban.”