It seems that Christmas came early for bitcoin investors as the father of cryptocurrency clears another milestone. The BTC/USD exchange rate now stands well over $800 – a record not seen since February 2014.

Many expected this milestone to arrive soon anyway since bitcoin was seemingly on an unstoppable rally recently thanks to various supporting factors from around the world and was already hovering in the high $700s for a while. Still, it is possible that what helped push it over the finish line was the news that US president-elect Trump has added to his cabinet an active and vocal supporter of cryptocurrencies and blockchain.

$800 #Bitcoin is right around the corner $BTCUSD https://t.co/VxpfgJirIl

In addition, the overall total market capitalization of the entire bitcoin blockchain is valued at about $13 billion now thanks to this recent rise. This is the overwhelming share of the entire market value of all blockchain assets and currencies in circulation, now worth just about $15 billion in total. 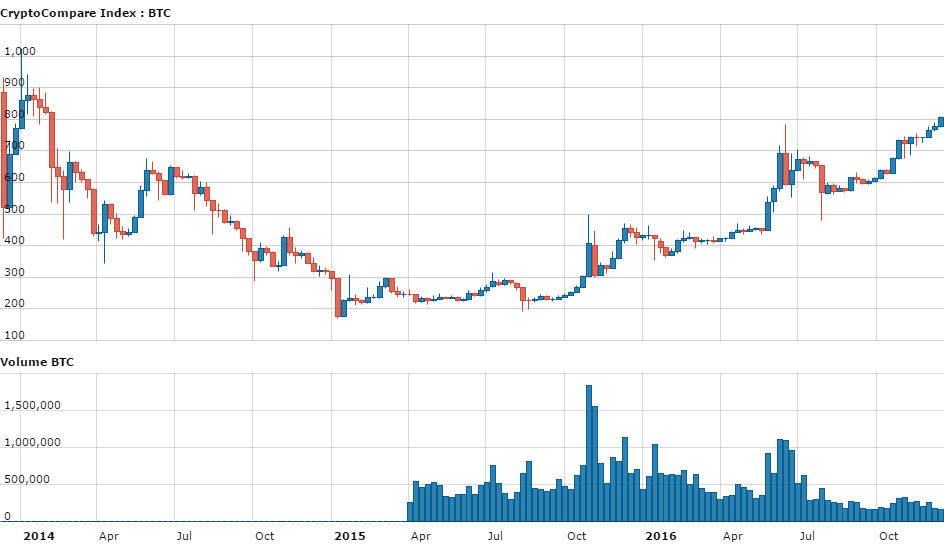 Charles Hayter, the CEO of CryptoCompare.com, comments: “The $800 dollar mark is both a significant milestone and a psychological barrier for bitcoin. Momentum continues to be driven by core fundamentals of uncertainty on the global stage, positive moves by industry and governments towards blockchain and light at the end of the tunnel for the scaling debate.”

Hayter added about the trading volume and its sources: “Chinese volumes for the past 24 hours are at about a third of recent record highs with 3.5 million BTC changing hands – this still dwarfs the USD market which has had average volume of 40k BTC. Again, it has to be remembered that Chinese exchanges operate a 0% trading fee policy that reduces the cost barriers to trading.”