Bitcoin prices have recovered slightly after reaching a critical point yesterday, when they hit 3-month lows and came within striking distance of the psychologically important $200 mark.

On most exchanges, prices are now over 4% higher than yesterday’s lows, trading near $223. In some rarely seen behavior, prices are actually higher on BTC-e. Much higher. Fuelled by an uncharacteristic surge in demand, prices have jumped as high as $230, and continue to threaten to advance. This represents a 3% premium to prices on its peers. Typically, prices are lower on BTC-e, usually by 1% to 1.5%.

The surge sent prices higher by nearly 7% in a matter of minutes. The wild behavior was characterized by a sudden drop back below $220, only to be followed by another push back to $230.

Causing the surge was a sudden jump in unmet buying demand, which saw trading volume jump from 300 BTC/hour to over 2,000. The current spike is seeing volumes above 5,000, the aggregate total during the stretch exceeding 11,000 (equal to over $2.4 million). The figures are the highest in a 4h period since mid-March. 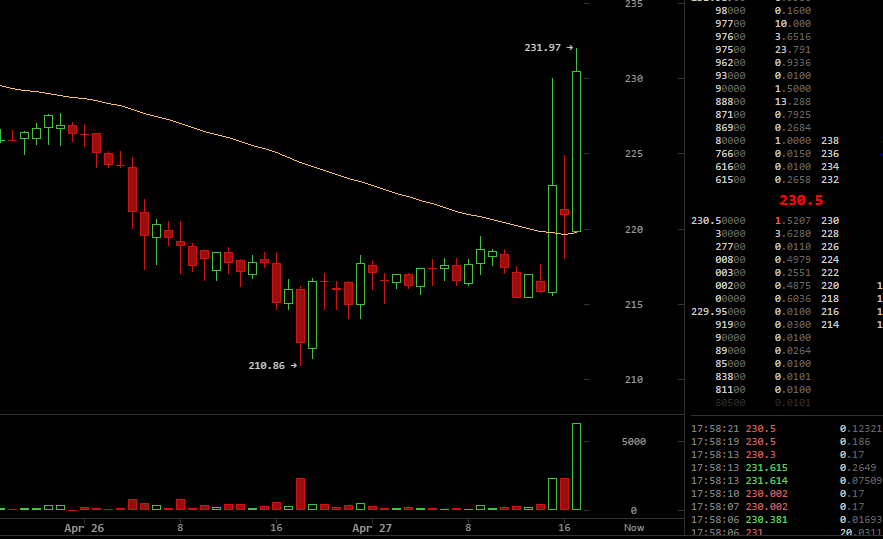 Inevitably, the prices will converge back toward their typical offsets from each other. In the meantime, the price action potentially presents lucrative arbitrage opportunities for traders with access to more than one exchange. Typically, the offset between exchanges is not large enough to create sure opportunities.

BTC-e is the sole outlier, so it is most likely that its pricing will acquiesce to the others, a meeting in the middle being highly unlikely.

Update: Prices shot as high as $269 and as low as $215 within a few minutes, a range of about 23%. It was the wildest swing in so short a period since last August’s flash crash.

(Screenshot of price movement on BTC-e courtesy of Bitcoinwisdom)