The world’s leading cryptocurrency, Bitcoin, has marked another important milestone today with regard to market valuation. The total capitalization of all bitcoins in existence is now well over $8 billion again, a benchmark not seen since July 2014. For comparison, the market capitalization of online money transfers firm Paypal (NASDAQ:PYPL) is about $45 billion, already less than six times that of the bitcoin network.

Behind the rise in market cap is the fact that bitcoin’s price has been on a rally recently, with the BTC/USD exchange rate today reaching above $520 after rising about 20% over the past week. Fueling the rally is massive demand from China pushing the trading volume in the last twenty-four hours alone to $145 million – about three times the normal volume.

In fact the Chinese demand for bitcoin is so great, that CNY/BTC volume is now over 90% and USD/BTC is just around 7.5% of the total market. This has also caused a huge spread between exchanges in China and international ones – as on Huobi bitcoin is traded around ¥3780, worth about $575.

Yearly comparisons are not always relevant for an instrument as volatile as Bitcoin but it should be noted in this case for its long term growth. The leading cryptocurrency has more than doubled in value as on May 29th, 2015 the BTC/USD exchange rate was just around $237 and the total market cap of Bitcoin was just $3.3 billion.

The overall market capitalization of all cryptocurrencies and cryptoassets combined is now almost $10 billion, with Ethereum at $975 million, Ripple at $197 million, Litecoin at $219 million, Dash at $53 million and the many others making up the remaining millions. 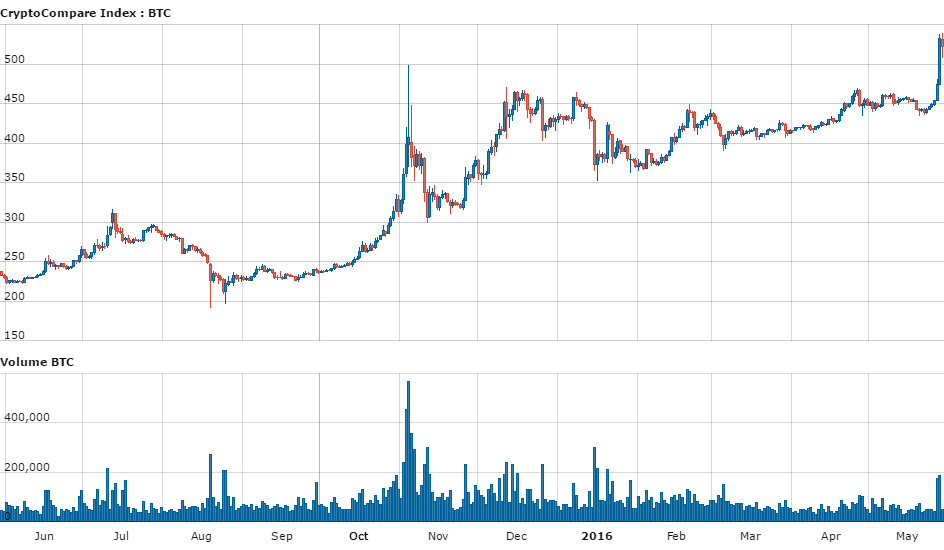