After much anticipation and many speculations, the second Bitcoin Halving has finally come to pass. Block number 420,000 has been added to the blockchain and the reward for mining new ones has been cut in half from 25 BTC to 12.5 BTC.

If you are not familiar with the technical concept, all you need to understand is that the halving is a mechanism in the source code of Bitcoin designed to fight inflation by making mining less profitable as the network progresses. It has only occurred once before in the history of bitcoin and the next halving is expected in about four years from now when the blockchain hits block number 630,000.

One remarkable aspect of the second halving is just how unremarkable the Bitcoin price charts look today. The exchange rate is now hovering around the $645 or ￥4330 level, about 2.5% below its level the previous day. For a currency that just recently saw swings of $100 a day, and especially in a time of great volatility around the effects of the Brexit vote, this is practically completely flat.

This minimal price movement suggests that miners, investors and traders consider the change to already be reflected in the current price levels – perhaps not surprisingly considering that it has quadrupled in value since a year ago. As Sam Lee, the CEO of BCG, explained, miners that were profitable at the much lower value levels in USD, AUD or Chinese yuan will remain profitable at the current price despite the lower returns per block in BTC. 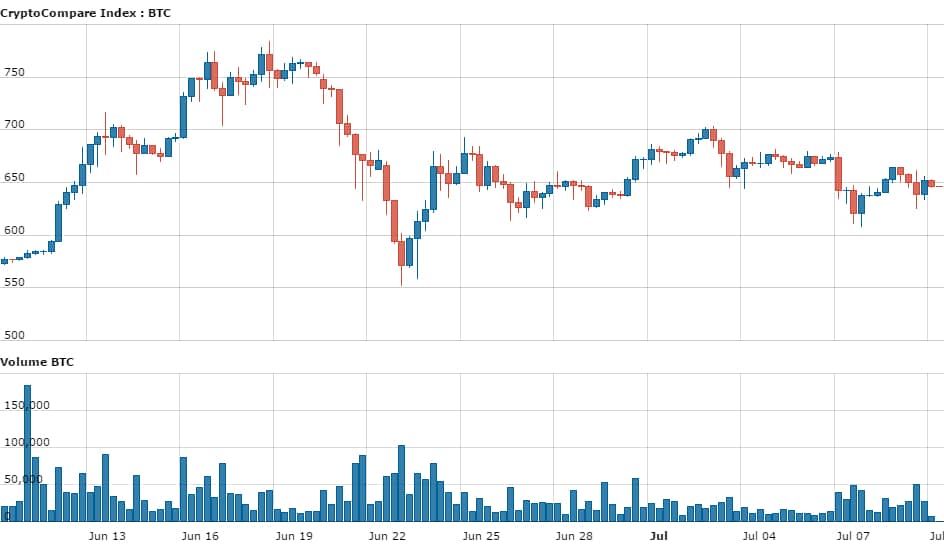 Sheffield Clark, the CEO of the American Bitcoin ATM network Coinsource, commented about the long term effects we might see from the halving: “One could argue that it may breed confidence among larger institutional investors uncomfortable with the arguably loose monetary policies of many central banks today, especially NIRP, and trigger capital inflows to bitcoin due to its track record of stellar year-over-year returns & long-term deflationary nature. Considering quantity of capital tied up in negatively yielding bonds is over $7 trillion, there could quite a bit of long-term upwards pressure to price subsequent to halving, should this confidence take hold.”

As for what it will mean for startups in the industry, he added: “I believe it will lead to a bit of a pop in what many are labeling the blockchain bubble, and we will see VC attention circle back around to bitcoin. This will most likely manifest itself through a series of a few high profile & value investments or strings of multiple low-mid profile & value investments taking place across the industry. I expect it to be a bit of both.”