A new, quasi-“national” crypto is arriving, this time in Finland.

This one will be different, although it remains to be seen how that translates into value. Auroracoin and its ilk were Scrypt-based, pre-mined coins. Many were obvious copies of Aurora, some using the exact same wording on their websites. Their distribution took place through Airdrops.

This one, however, is a spinoff of Nxt called FIMKRYPTO, or FIMK. It is to be distributed via Nxt’s DGEX exchange. It is described as a “peer to peer payment system software which contains embedded cryptocurrency protocol.” In DGEX’s semi-monthly update, it says the goal of the creators “is to distribute one third of the currency supply as a basic income for the citizens of Finland.”

On its website, the income model is described as follows:

“Krypto FIN ry [the devloper/distributor of FIMK] pays basic income to all identified citizens of Finland who opt in and are more than 15 years of age. Basic income payments begin during 2014 starting with 100 FIM per month. The monthly amount may be adjusted after a period according to vote of the board of the association, and will be varying according to resources available and number of opted in citizens, among other aspects. Preliminary calculations show that Krypto FIN ry will be able to pay basic income for several years and may continue as long as distribution of extra block rewards from the genesis block continue, nearly four years.”

Following is the schedule for development and distribution: 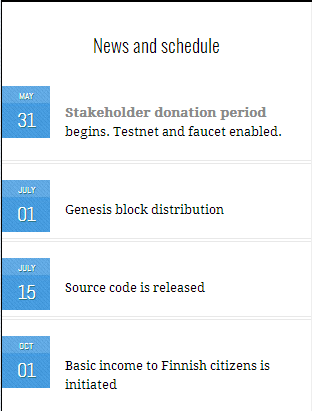 Anyone donating “the slightest number of bitcoin fractions” will get a “notable share” of the initial FIMK coins.

Users are assured that this will differ from Auroracoin:

“I have been assured the citizenship distribution is completely different from the airdrop model Iceland’s Auroracoin brought on previously, one that caused the coin to flatten out because of a sudden increase in supply. The improved “national coin” basic income model of FIMK allows for stable and slow distribution – again like Bitcoin – to not dilute the supply too drastically and keeping the value in upswing. It works in a snowball effect’ish way; while new users are being brought in by the lure of “free” tokens, new national and international service providers are continually incentivized to adopt accepting payments from the users of the swiftly expanding currency.”

Out of the 1 billion FIM (plural for FIMK) to be produced, the bulk are to be divided 3 ways: “stakeholders” (those donating BTC), block rewards and income for Finnish citizens.

One is really tempted to write this one off after reading the update and going through FIMK’s website. Indeed, the DGEX update foresaw and sought to address such skepticism:

“People have been wondering about my decision to add FIMK to DGEX’s very limited selection of offerings, and justly so. While the advanced features of the currency and the fact that the author is a good long term acquaintance of mine whose performance I can trust are obvious to only a few, there largely remains a strange feeling that something is amiss. Well here comes the big secret and the kicker:

– the partnership with FIMK enables DGEX to bring FIAT exchange services to NXT!”

Speaking of “national” cryptos, which seem to have been forgotten just as quickly as they were launched, how much are they now worth?

So empty was their value, and so little left behind, that crypto followers didn’t even notice similar coins when launched. These include Canada eCoin (277th), SiliconValleyCoin (296th), GermanyCoin (313th) and Hawaiicoin (316th).

(Correction: An earlier edition of this post incorrectly interpreted DGEX’s remarks as Nxt backing. Nxt says that it does not back FIMK.)

I would like to point out that FIMK is nót issued by Nxt!

FIMK is a clone of Nxt and is in nó way affiliated with Nxt.

Graviton, of DGEX, has agreed to host this issuance, but is no more a “partner” of Nxt than anyone.

Nxt is an open source system, and FIMK has cloned this. This is well withing their rights, but this does not mean that Nxt is in any way affiliated with them.

It would be good if you could correct this in the title, as this is certainly not the case.

Sorry, I think you got something wrong there.
Nxt has nothing to do with FIMK. It’s just a clone of Nxt.
Just like Litecoin is a clone of Bitcoin. 🙂

It’s nice that NXT is getting some attention! But, please don’t give NXT credit for backing FIMK or any other coin.

Respected Nxter, Graviton and DGEX have decided to help the FIMK with their issue, but they do not represent NXT with their statements of support.

In fact, NXT “partners” with no one. http://goo.gl/HZuaIH

Is it possible to run a retraction or correction to this post? Thanks!

Indeed why will it be different this time?

Nxters have challenged this new coin following the announcement of this country based coin in nextforum.org as previous attempts at such coins have failed. Reassurances from the supporters of the coin have been posted there too.

FIMK has NXT DNA but that is different to NXT backing it – I am sure the community wishes FIMK the best of luck but the community as a whole is NOT responsible for this coin.