After several failed moves toward $40,000, the price of Bitcoin’s path forward seems to be a bit unclear.

For some, though, the stall around the $35K mark is nothing more than another bump in the road. A new report by investment firm and hedge fund, Pantera Capital suggested that BTC will reach $115,212 by August 1st and that Bitcoin’s current price action is in line with the ‘stock-to-follow’ model.

According to CoinTelegraph, the model focuses on the price impact of Bitcoin’s “halving events” that take place every 4 years. During these events, the amount of Bitcoin mined in each block is cut in half. A number of analysts have previously noted a positive correlation between halvings and the price of Bitcoin. 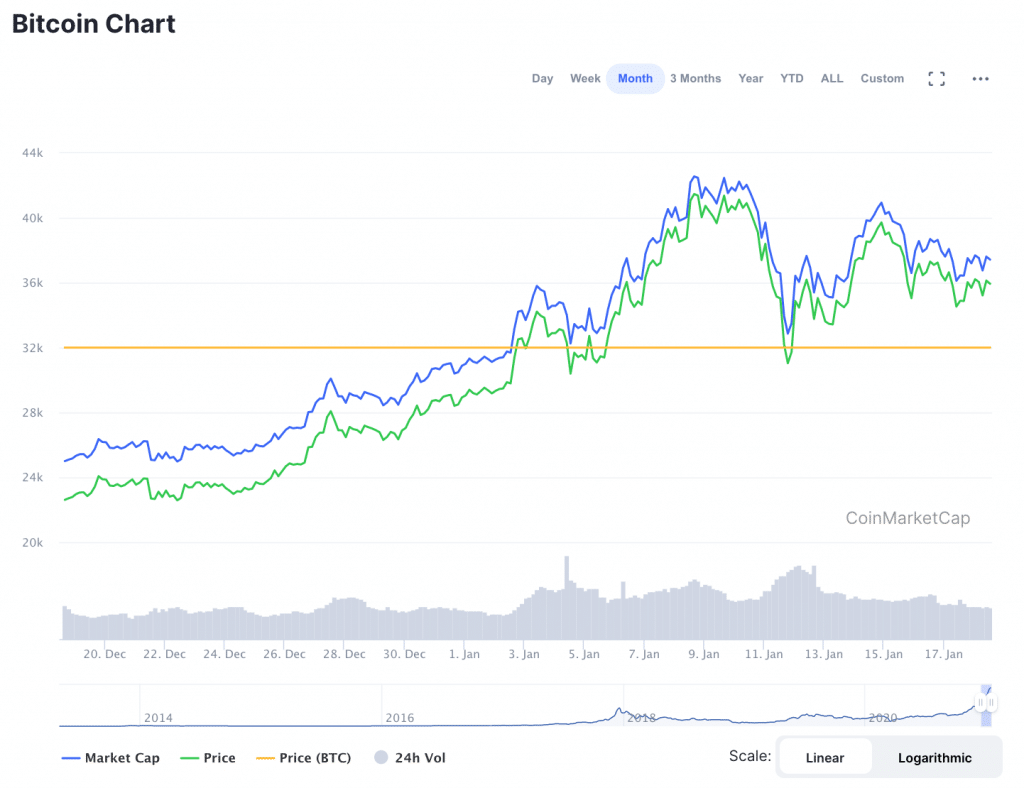 What Is Next for Bitcoin?

Pantera’s model demonstrates that the full impact of these halving events becomes evident about six months after each halving. So, for example, when Bitcoin ‘halved’ on May 11, 2020, its price was around $8,000. Six months later, BTC was trading above $15,000. By the end of the year, BTC had hit another new all-time high.

The model takes into account that there will be corrections on the longer-term road to $115K. However, in the short term, Bitcoin could be headed straight for a doozy.

Finance Magnates previously reported that a number of market analysts, including JPMorgan strategist Nikolaos Panigirtzoglou, said in a report that BTC may be at risk of lower price drops if it cannot manage to recapture $0K.

The analysts cited November of last year when Bitcoin faced $20,000 as a price barrier. In December, institutional money in December helped Bitcoin jump above the $20,000 level; but will there be enough institutional cash to help Bitcoin capture $40K?

“The recent price action shows that the trend-following traders could propagate the last week’s correction and momentum signals will naturally decay from here up till the end of March if Bitcoin’s price fails to break above $40,000,” the strategists said in the report.

While Bitcoin Teeters, DeFi Continues on a Bullish Wave

While the price of Bitcoin seems to be waffling (in the North American sense of the word), some coins in the DeFi space have been performing spectacularly. Indeed, according to data from Messari, at least 14 DeFi tokens were up more than 20 percent over the past 24 hours; three of those assets were up more than 50 percent.

Additionally, a report by CoinTelegraph singled out Aave (AAVE) and SushiSwap (SUSHI), which have both shown strong rallies over the past several days. Moreover, both AAVE and SUSHI prices have “risen by more than three-fold since December,” less than a month ago.

Crypto Markets Started Running Behind the FedGo to article >>

According to Santiago R. Santos, Partner at ParaFi Capital, the bull run of these tokens is due in part to the market ‘re-rating’ the major DeFi projects.

Santos wrote on Twitter that “DeFi protocols creeping up the top 20 is a key re-rating moment.”

“As stupid as it may seem, it’s like being on page 1 of Google search results,” he said. “So far, DeFi has captured limited mindshare. It’s <5% of total crypto market cap. Yet, it has the most usage, innovation & fundamentals.”

It is also possible that the pump of capital into Bitcoin brought renewed attention to cryptocurrency markets across the board, causing investors to pile money into DeFi projects that may have become somewhat deflated after the passing of the DeFi summer.

DeFi protocols creeping up the top 20 is a key re-rating moment. As stupid as it may seem, it's like being on page 1 of Google search results.

So far, DeFi has captured limited mindshare. It's <5% of total crypto market cap. Yet, it has the most usage, innovation & fundamentals.

According to CoinTelegraph, Aave and SUSHI are currently valued at roughly $2.2 billion and $900 million, respectively. However, “analysts still say that they are both undervalued at these market caps, given the user activity on both platforms.” For example, SushiSwap is “continuously surpassing its record-high monthly volume,” and could be on track to quadruple the amount of user activity it had last month.

Share this article
Tags: bitcoin / DeFi
Got a news tip? Let Us Know