The leaves are falling. Cold winds are blowing. After a hot, hot DeFi summer, it looks like we are headed for a DeFi fall (no, but really).

After a month of downward price movements across the board, it seems like the DeFi market is officially in the midst of an extended cooldown.

Indeed, of 42 DeFi assets listed by crypto asset data firm Messari, only three showed positive price movement over the course of the last 30 days: Hegic, CoTrader, and Uniswap. (Though it should also be noted that 24 of the 42 showed positive price movements over the course of the year, and that 7-day returns look much more positive than the 30-day outlook.)

The downfall in token prices represents a massive turnaround from DeFi market trends earlier in the year.

Indeed, Tom Albright, chief executive of Bittrex Global, told Finance Magnates that indeed, “July and August were incredibly hot for the crypto markets in general,” and that throughout those months, “DeFi in particular blazed up and came into prominence.”

In fact, the DeFi craze ‘drove appreciation in altcoins, particularly ERC-20 tokens’, which are altcoins that are issued on the Ethereum blockchain.

#DeFi tokens are taking the lead in rebounding after the market correction with average gains of 19% today. Trade #DeFi coins @OKEx via: https://t.co/oja9Fj66q3 to catch the market trend.

How much longer this #DeFi trend will last? Choose an option & comment your reasons.

What could be causing the cooldown?

Part of the DeFi drop could be a simple market correction. While the months of gains in the DeFi space were impressive, DeFi tokens were almost unquestionably overbought during this period.

Indeed, in early August, Deniz Omer, head of growth at Kyber Network, told Finance Magnates that the astronomical DeFi gains were “short-term, basically,” and that “[…] there should be a rebalancing and a correction at some point, especially if more people join in.”

It seems that that correction may be happening now.

Dips in token prices may also be further fueled by a decrease in the amount of yield that DeFi tokens can produce for their holders – a factor which could fuel even more token drops.

Yield farming is a part of the DeFi ecosystem that allows token holders to earn fixed or variable interest by investing crypto (and thereby providing liquidity) in a DeFi market. As CryptoBriefing said, “investing in ETH is not yield farming; lending out ETH on Aave for a return beyond the ETH price appreciation is yield farming.”

Yield farming is said to be a major factor in what drove the interest in DeFi over the summer. However, in mid-September, blockchain and finance firm SEBA published a report finding that the “yield farming trend in DeFi is not sustainable.”

In other words, the market was headed for a point when the supply of yield farmers would exceed the demand for token liquidity.

“As long as there are buyers for new protocol tokens, yield farmers can continue jumping among protocols,” SEBA’s report explained. However, “when buyers stop accepting the other side of the trade, this deranged activity will be arrested.”

‘Deranged’ or not, it seems that the market may be reaching the point where supply of liquidity has exceeded demand.

”As Things Got Particularly Heated over the Summer for DeFi a Lot of Most Unscrupulous People Jumped in.”

Another factor that could be contributing to the DeFi cooldown is the crop of scams that popped up during the height of the DeFi craze. While high prices over the summer may have led to a higher amount of attention and new users in the crypto space, not all of the newly-generated activity was positive.

In fact, the heat of the DeFi summer seems to have caused an analogous phenomenon to the 2017 ICO craze: an influx of fraudsters and scam artists hoping to make a quick buck off of the latest craze.

“It should also be noted that as things got particularly heated over the summer for DeFi a lot of most unscrupulous people jumped in,” Mr. Albright told Finance Magnates. “It brought out the worst players in the market preying on most vulnerable and there were some outright scams.”

While DeFi scams have not been nearly as common as the ICO scams that populated the crypto landscape in 2017, there have been a number of Defi-related scams that have come onto the scene in recent months.

Just this week, reports emerged that more than 50 crypto influencers were in on an elaborate plan to defraud DeFi investors using ‘$Few’ tokens as a pump-and-dump scheme; in September, at least three DeFi projects were identified as exit scams: LV Finance, Yfdexf.Finance, and EMD.

Thought $FEW was fun and inclusive.

Playing jokes and games on regular ppl bc they do not care about regular ppl.

Beyond scams, there have also been a number of incidents where hackers have exploited DeFi protocols for personal gain. For example, DeFi lending platform, Bzx lost $8.1 million in a new hacking attack in mid-September, the third hack caused by flawed code in its smart contracts this year.

The seemingly heightened number of scams that have been appearing on the DeFi scene may also be contributing to the cooldown in DeFi token prices.

Beyond that, the scams do not seem to be affecting the long view on where DeFi is headed. A number of prominent analysts within and outside of the cryptocurrency space believe that fully-decentralized protocols will eventually be the norm in the crypto world and possibly outside of it.

This includes Binance chief executive, Changpeng Zhao, whose recent interview with CoinDesk was entitled “Binance CEO Says He Fully Expects DeFi to Cannibalize His Crypto Exchange.” Indeed, that he, Zhao expects that DeFi protocols will eventually win out over Binance’s centralized crypto exchange, which is the largest part of its current business model.

“Our mission is not to build a CeFi exchange,” Zhao said. “Right now it is one of our larger businesses that support our growth. But over the long term, we want to push decentralization.”

However, if decentralization wins out as the dominant business model for trading venues in digital-asset markets, Zhao seems to take an ‘if you can’t beat ‘em, join ‘em’ attitude, saying that Binance could profit by shifting its focus to building decentralized applications.

“In the Future, the Financial System Will Be Broken into Three Parts.”

“My hypothesis is that DeFi will take the place of unregulated exchanges that don’t require KYC/AML and ignore security rules and general compliance,” he said. “Centralised exchanges will co-exist with DeFi but only in the regulated form.”

Mr. Albright believes that “in the future, the financial system will be broken into three parts,” including traditional banking, the non-DeFi crypto sector, and DeFi.

“Traditional banks and Financial Services will integrate and incorporate blockchain and crypto technologies, and centralized finance will also play a role connecting to decentralized platforms; libertarians will use DeFi,” he said.

This allows some freedom of choice for users: “each user has to decide their own comfort level and risk level. Some people are comfortable handling private keys and analyzing projects, whereas others just want something simple that works. They don’t want the effort that comes with DeFi.”

Additionally, centralized exchanges could continue to act as onramps into the crypto world, even as DeFi continues to gain higher levels of prominence.

While the DeFi cooldown is primarily centered on, well, DeFi, the cooldown has had an effect on cryptocurrency markets more generally.

“The DeFi market cooling a little basically cooled the entire [crypto] market,” Bittrex’s Tom Albright told Finance Magnates, which “pushed a number of retail traders to the sidelines. This led to an overall pullback, consolidation of gains and stabilization after heavy volatility in July and August.” 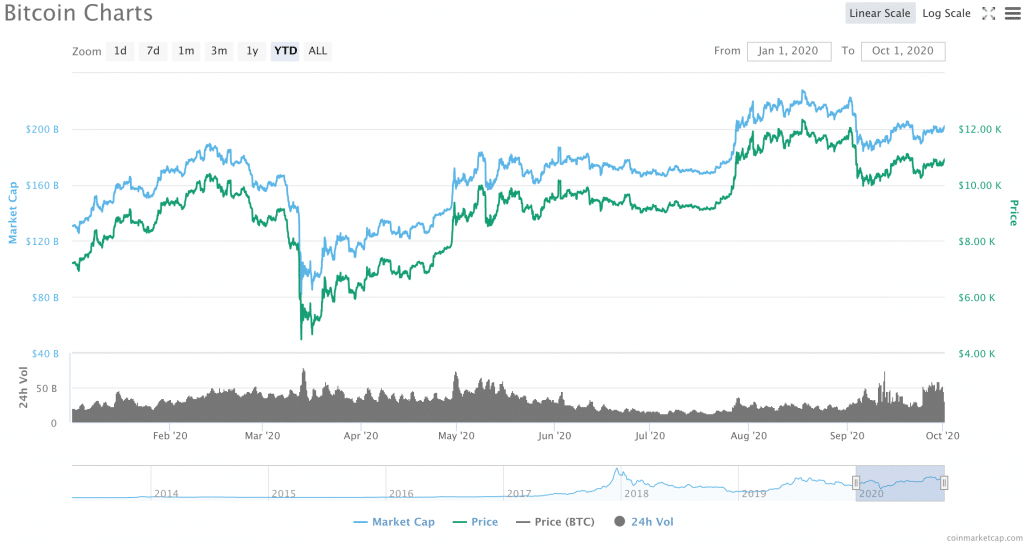 Indeed, while DeFi has been cooling off, Bitcoin seems to be stabilizing. As DeFi markets and Ethereum-based tokens declined through the month of September, the price of Bitcoin traded solidly over the $10,000 line.

Additionally, citing data from Skew, CoinDesk reported that the spread between the six-month period implied volatility for Ether and Bitcoin, which measures the expected relative volatility between the two, dropped to a 2.5-month low of 4% over the weekend, adding to a 21% drop over the past four weeks.

Skew chief executive, Emmanuel Goh told CoinDesk that the decline “could signal a change in market leadership back to Bitcoin after a couple of months focus on the Ethereum complex.”

As such, Bitcoin could lead market movements in the run-up to the United States presidential election, which will take place early next month.