The number of stablecoins on the map from the beginning of 2018 to the end has grown exponentially. What was once a fringe concept is now a mainstay of the cryptocurrency markets–one that may be heading toward adoption into the mainstream economy.

Stablecoins are cryptocurrencies that are collateralized, or “pegged” to a “real-world” asset. These assets can be commodities like gold or real estate; they can also be fiat currencies. Most fiat-collateralized stablecoins are pegged on a 1-to-1 basis; in other words, for every one stablecoin unit, there is one USD, EUR, JPY, or another currency.

Stablecoins have become so popular that they appear in every corner of the crypto world. Cryptocurrency exchanges are issuing their own stablecoins; even some banks and governments are launching stablecoins. The most popular option, however, are stablecoins that are available for public use. As more and more of these publicly available stablecoins appear, the competition between them grows ever more fierce.

So here, in order of market cap, are three of the most widely-used stablecoins currently on the market. Which stablecoin will rule them all? Only the users can decide.

Storied and Controversial, Yet High in Volume: Tether

If we’re going to talk about stablecoins, we have to talk about Tether. Launched all the way back in 2015, Tether is one of the oldest cryptocurrencies–let alone stablecoins–on the market. Tether is a fiat-collateralized stablecoin: for every one Tether Dollar, Tether claims that there is one USD in its bank accounts.

There has also been some controversy surrounding the legal language in Tether’s user policy. An archived version of the coin’s user policy reads: “Tethers are not money and are not monetary instruments…they are also not stored value or currency…there is no contractual right or other right or legal claim against us to redeem or exchange your Tethers for money.”

Now, the policy reads that “in order to cause Tether Tokens to be issued or redeemed by Tether, you must be a verified customer of Tether. No exceptions will be made to this provision. The right to have Tethers redeemed or issued is a contractual right personal to you.” However, the ability to become a “verified” customer has been unavailable since before the first of the year.

Most recently, a dip in the price of Tether this October caused even more questions regarding the stability of this stablecoin. At one point, the coin dipped as low as $0.94; on cryptocurrency exchange Kraken, USDT sank all the way down to $0.90.

Despite the controversy, however, Tether is still one of the most widely-used stablecoins in the world. At the time of writing, it had a $1.7B market cap and a 24-hour trading volume of $5.7 billion. Notably, however, Tether’s market cap has taken a significant hit over the course of the last several months.

Like Tether, TrueUSD is a fiat-collateralized, 1-to-1-backed cryptocurrency. Unlike Tether, however, TrueUSD was created with the specific mission to greatly improve upon the transparency and legal practices that Tether has engaged in.

TrueUSD has promised to regularly publish audits conducted by Cohen & Co., an investment management firm based in Philadelphia. TrustToken, the company responsible for the launch of TrueUSD, keeps its funds in multiple escrow accounts to prevent large-scale hacks or other kinds of theft.

TrueUSD has reached a market cap of nearly $90 million – you can view the most recent independent attestation of the collateralized funds below #Crypto #stablecoin https://t.co/coD13IdPO9

“We’ve partnered with professional trust companies to manage the escrow accounts that hold the TrueUSD collateral,” reads a blog post by TrustToken.

Still, not all of these companies are known. “These trust companies include Alliance Trust Company of Nevada and Prime Trust. Their correspondent banking relationships include US bank, Alliance Bank, Mercantile Bank, and others. We’re in discussions with other trust companies and banking partners.”

Additionally, the company has come under some scrutiny for similarities in the language of its user policy to Tether’s user policy.

Come on guys you didn’t have to copy this line from Tethers old Terms of Service.$TUSD pic.twitter.com/oi3Ls4OWw7

Still, TrueUSD is well on its way to becoming the industry’s go-to stablecoin. Overall, its marketcap and 24-hour trading volume were far below Tether’s at the time of writing ($165.9 million and $66.7 million respectively.) However, while Tether’s market cap seems to be steadily falling, TrueUSD’s seems to be steadily rising.

MakerDAO/DAI: A Crypto-Collateralized Stablecoin Based on Smart Contracts

MakerDAO is a decentralized autonomous organization that has a unique approach to the creation of stablecoins. Unlike TrueUSD and Tether, DAI coins (MakerDAO’s currency) are collateralized to another cryptocurrency–Ethereum.

DAI is not the first or the only stablecoin to be collateralized against another cryptocurrency. Dan Larimer’s BitShares introduced ‘BitUSD,’ a BitShares-pegged coin, all the way back in 2014.

Unlike BitUSD, DAI is pegged to Ethereum. Also unlike BitUSD, users do not purchase DAI tokens. Instead, users lock their ETH tokens into the MakerDAO system in exchange for DAI. When they return their DAI, they are given the equivalent amount that was collateralized upon locking in. Of course, while this model may address some legal concerns, the value of a single DAI token is affected by price volatility in Ethereum; however, the coin has been designed in such a way that its value has stayed fairly static since its launch.

Kingsley Advani, Founder & Partner at Chainfund Capital, explained in a Medium post that this system was created as a way to solve the legal problems associated with stablecoins. “Dai recognises several of the problems plaguing fiat-pegged cryptocurrencies. Namely, so long as any stable coin is backed by real fiat currency existing in bank accounts, foul play or legal action involving the account holder will invariably place the token’s value in jeopardy,” he wrote.

MakerDAO is far from any sort of widespread adoption. At press time, its market cap was just $67 million, and its 24-hour trading volume was $18.9 million. However, its market cap is steadily growing. 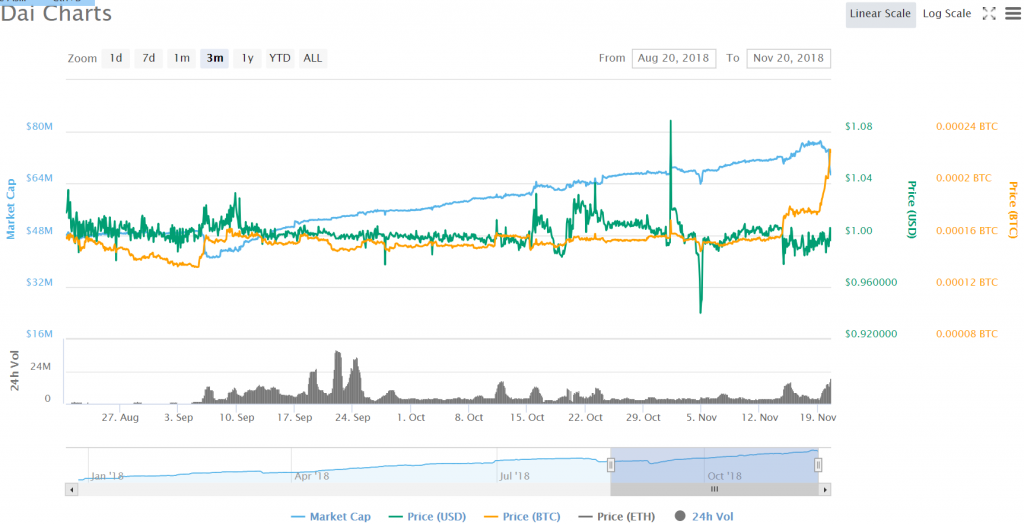