Tether dollars, or USDT, was designed to be a stable currency – it would always carry the same value. Launched all the way back in 2014, Tether was the world’s first ‘pegged’ currency. In other words, it was the first currency that was designed to be backed on a 1-to-1 ratio with USD. For everyone one Tether dollar, one USD dollar was supposedly in the bank.

Tether’s purpose was to eliminate price volatility in cryptocurrency – to give crypto investors an asset where they could safely store their money without having to worry that it would lose its value.

And so it was – for a while. Tether was regarded as a safe way to store assets; it was soon picked up by some major exchanges, including Bitfinex (the relationship between the two companies was later deemed as dubious.) USDT was also picked up by Taiwanese banks as a method of processing international transactions.

To this day, Tether is very widely used. Coinmarketcap lists it as the second-most traded cryptocurrency after Bitcoin. 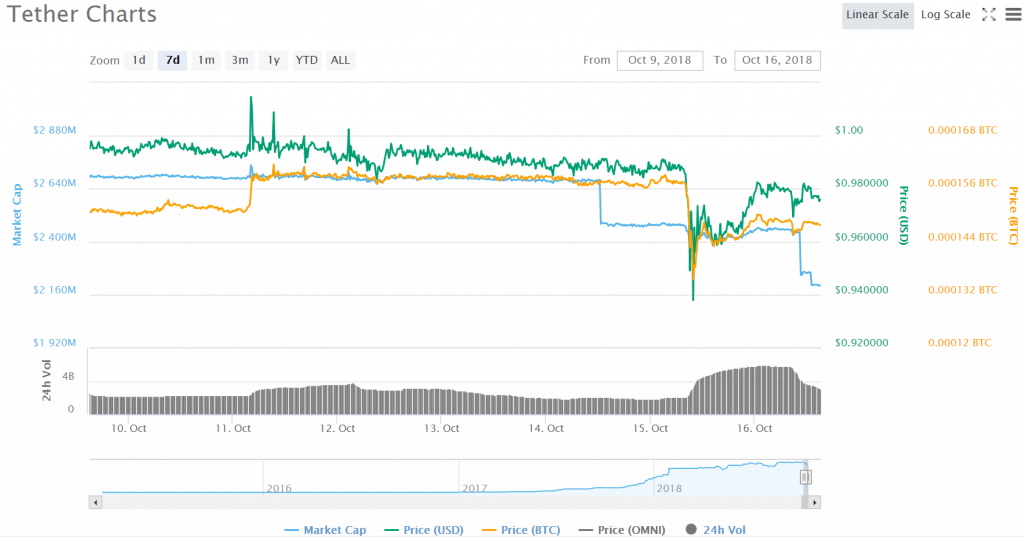 Since the start of October, however, USDT has shown some rather uncomfortable downward motion. Although this isn’t the first time that USDT’s price has wavered, the severity of this dip has caused many USDT holders to ‘panic-sell,’ causing a sort of crypto bank run.

@Tether_to is collapsing and cryptos are pumping!! People panic selling USDT? Hope you all got rid of #USDT already. Wouldn’t touch them with a ten-foot pole right now… https://t.co/17pM660w50 pic.twitter.com/SIPopuPb1g

While USDT has recovered to $0.97 at the time of writing, it dipped to $0.94 over the weekend. Bloomberg reported that USDT sank as low as $0.90 on Kraken.

Tether, the cryptocurrency which is theoretically backed 1:1 by USD held in a bank account and available on demand, is currently in the early stages of a bank run.

Binance CEO Changpeng Zhao chimed in with a rather terse tweet of his own: “regulated stable coin, lol,” he wrote, with a screenshot of Tether’s price movement chart.

Could the Downward Movement Be a Positive Thing?

Some analysts believe that Tether’s downward movement may not exactly be a bad thing for the industry.

If nothing else, the price movement highlights the need for transparency and regulatory structure in the industry. “As digital currencies mature and are hoping to reach an ever growing audience and usage, we learn once again of the importance of full transparency and checks and balances,” Ido Sadeh Man, Founder & Foundation Council President at Saga Foundation told Finance Magnates. Saga is a foundation headquartered in Switzerland. It describes itself as “developing the first fully transparent and non-anonymous reserve-backed digital currency (SGA), and is expected to launch its token at the end of 2018.”

“I believe it is becoming increasingly clear that the rise of regulatory framework is more of a feature than a bug. Stable coins are not the holy grail. The true value still remains in creating a fully independent currency, with its own intrinsic value, a currency that only uses reserves as a stabilizing mechanism rather than an end to itself.”

Additionally, the downward movement seems to have spurred bullish movement in Bitcoin. 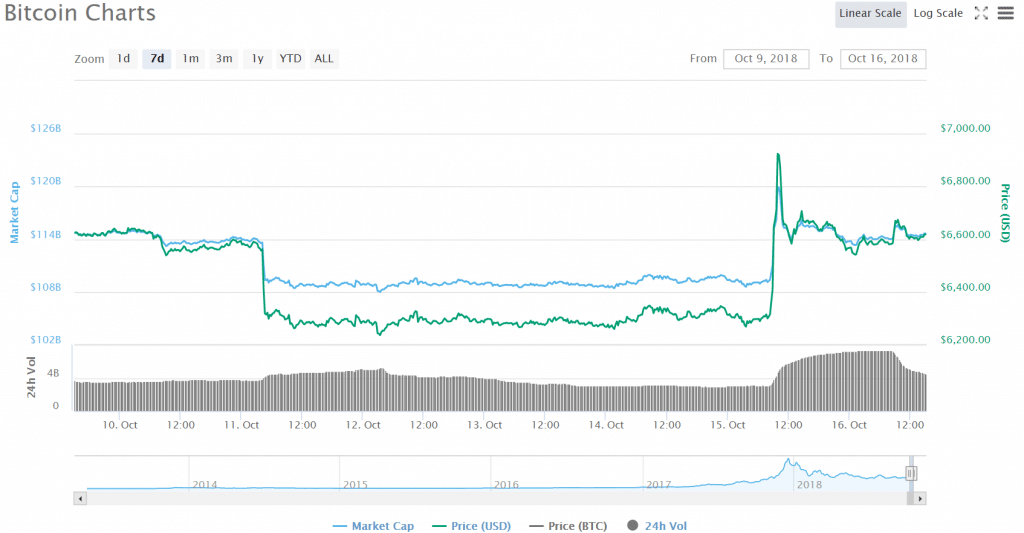 A Bit of Background

Depending on who you ask, something seemed to be amiss with Tether from the very beginning. From its inception, many independent voices in the cryptocurrency community were uncomfortable with some of the language in Tether’s user policy. An archived version of the user policy states that “Tethers are not money and are not monetary instruments…they are also not stored value or currency…there is no contractual right or other right or legal claim against us to redeem or exchange your Tethers for money.”

Following the widespread outcry, Tether eventually changed its user policy to say that “In order to cause Tether Tokens to be issued or redeemed by Tether, you must be a verified customer of Tether. No exceptions will be made to this provision. The right to have Tethers redeemed or issued is a contractual right personal to you.”

However, the ability to become a “verified customer” of Tether has been suspended for months.

Trouble continued to brew for Tether throughout 2017 when the cryptocurrency community began to seriously question whether or not Tether had the USD reserves that it had been claiming all along. Some analysts believe that these accusations (and the legal and media sagas that followed) contributed to Bitcoin’s extreme volatility throughout the year.

The accusations became more serious when researchers at the University of Texas published a report questioning Tether’s reserves in June of this year. The findings were also published in a New York Times article. However, questions about the validity of the research remain; the study was not fully peer-reviewed at the time of its publication.

Tether has Denied All Accusations

Naturally, Tether has continuously denied these accusations. The firm published a report of its own in June to prove that it did indeed have the money that it claimed to have – law firm Freeman, Sporkin, and Sullivan (FSS) stated that on June 1, 2018, Tether had $2,545,067,236 in its reserves, more than enough to cover the 2,538,090,824 USDT that were in circulation at the time. 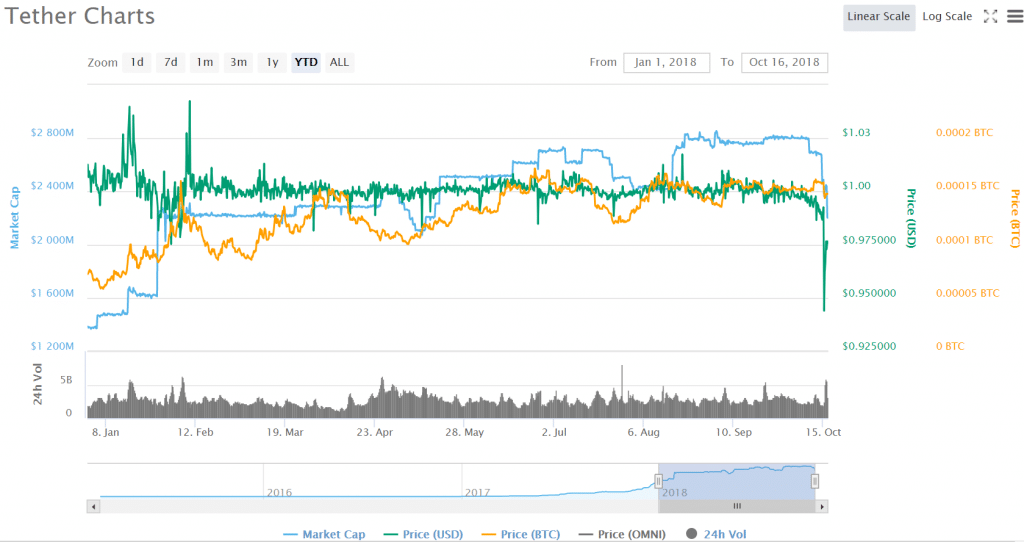 When the report was published, Tether CEO Jan Ludovicus van der Velde told The Independent that “Despite speculation, we have consistently stated that tether is backed by USD reserves at or exceeding the tethers in circulation at a given moment, and we’re glad to have independent verification of this so answer some of the questions posed by the public.”

“We are by no means done with our efforts to promote increased transparency at Tether,” he continued. “We are planning to build on this report moving forward and, despite the challenges of applying current accounting and assurance standards to cryptocurrency clients, we continue to discuss these issues with potential audit partners.”

Still, the crypto community was not satisfied. Inside the report, FSS stated that while they are indeed a law firm, “FSS is not an accounting firm and did not perform the above review and confirmations using Generally Accepted Accounting Principles… The above confirmation of bank and tether balances should not be construed as the results of an audit and were not conducted in accordance with Generally Accepted Auditing Standards.”

All of this has caused Tether’s very status as a stablecoin to be questioned. “I think that by design, a coin that maintains a full peg to a specific asset is stable in relation to that particular asset. So, by a monetary design, Tether is what we would call a currency board on the dollar, or indeed a stable coin,” Ido Sadeh Man told Finance Magnates.

“But again, this is all reliant on the assumption that Tether indeed holds one dollar in reserve on any sold Tether, that those reserve [sic] are available for Tether to use, are liquid, and on Tether’s commitment to actually use those funds to redeem Tether’s commitment.”

“However, this efficiency relies on two main elements: The first element is the knowledge of the size of funds that reside in the reserve and the second one is the governance structures that are committing those funds into sustaining the stability of a currency or assisting the economy. Whenever an actor fails to demonstrate fully transparent answers to these two questions, the ability of the reserve to actually assist in the stability of the currency is essentially jeopardised.”

“So, without referring to whether the reserves really exist or not, the fact that one has to rely on the actor itself to attest to the level of reserve is inherently problematic. One would expect that such an attestation would be done by one or several independent oracles that are not parties to the monetary contract itself.”