A lawsuit against Israeli entrepreneur Moshe Hogeg, founder of Singulariteam and owner of the Betar Jerusalem Football Club, has been withdrawn by two American investors. Israeli news source Globes reported that the two men, Marvin Marmelstein and Barry Friedman, are nullifying the lawsuit without publicly announcing a reason.

Instead, the filing for the withdrawal simply said that “in light of recent circumstances created in recent days including the proper forum issue, without giving up any allegation or fact or right, they [Friedman and Marmelstein] are withdrawing the claim.” (Translated quote.)

A reason for the withdrawal was not given, but a settlement could have taken place outside of court

However, the lawsuit could be re-opened: “the plaintiffs reserve their right to resubmit the claim at any time, and the termination of the suit does not constitute a waiver of any of the plaintiffs’ claims or rights, and no pre-trial hearings have been held and requested to be filed by the filing,” the document continued. “The court is hereby directed to order the suit to be dismissed without an order for expenses and to order the reimbursement of the fee in accordance with the regulations of the courts.” (Translated quote.)

According to Globes, however, jurors knowledgeable in the latest lawsuit against Hogeg have said that that the withdrawal of the lawsuit may be part of a settlement between the involved parties that took place out of court.

The case was originally filed in the Tel Aviv District Court in July of this year in regards to Mobli, a defunct social media startup that Hogeg founded in 2010 with his brother, Oded Hogeg. During the first three years, Hogeg reported fundraising to the tune of $86 million from investors. Friedman and Marmelstein allegedly bought shares in Mobli for over $1.5 million in 2013-2014.

The lawsuit is not the only one in which Hogeg has been embroiled in recent months.  According to Globes, a similar allegation against Hogeg and Mobli was made in a lawsuit filed in March 2018 in a California court by American Haredi billionaire Shlomo Yehuda Rechnitz. In the lawsuit, which is still pending, Rechnitz claims that misrepresentations by Mobli led him to invest $5 million in the company.

Hogeg and another of his companies, blockchain prediction market Stox (STX), are also facing a lawsuit in a United States district court in Washington State after one Sean Snyder, a disgruntled investor, officially filed a complaint on November 25th. Snyder is not represented by any legal counsel in this case.

Snyder, who is based in Vancouver, is suing Stox Technologies Ltd and Moshe Hogeg for breach of contract, breach of fiduciary duty, fraud, intentional infliction of emotional distress, unjust enrichment, declaratory relief, accounting, and for breaches of the Racketeer Influenced and Corrupt Organizations Act (RICO). 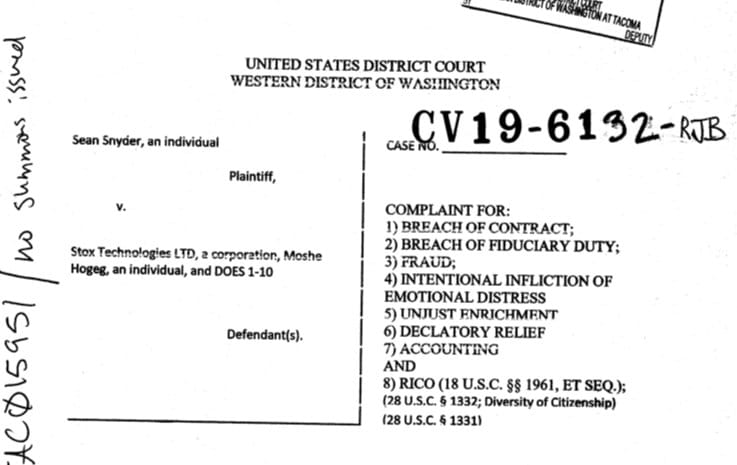 On December 2nd, the court ordered that the defendant and the plaintiff should begin the discovery process and that any depositions should be conducted in compliance with a standard set of rules.

Stox is an open-source prediction market based on the Ethereum network. Hogeg is involved in a number of other cryptocurrency-related ventures in addition to Stox; he is the Founder and Co-CEO at blockchain smartphone manufacturer Sirin Labs.

“Hogeg and his co-conspirators have committed numerous illegal acts” including the sale of “worthless, unregistered securities,” lawsuit claims

In the 43-page complaint that began the lawsuit, Snyder alleges that “Hogeg and his co-conspirators have committed numerous illegal acts,” including the sale of “worthless, unregistered securities.”

Snyder claims that Stox caused him losses of “no less” than $430,000 after it failed to perform the duties that it had outlined in its whitepaper.

Specifically, Snyder alleges that the company issued a larger amount of tokens than it originally said that it would, a factor that “[caused] a drastic and unpredictable loss in value of the currency.” Snyder also says that the losses are not just from his own pocket, but that other investors in the US and around the world were defrauded to the tune of hundreds of millions of dollars.

Snyder also points to the fact that Hogeg allegedly used the profits from the sale of STX tokens to acquire $19 million worth of land in Tel Aviv, $7.2 million for the acquisition of Israeli soccer club Beitar Jerusalem, and a $1.9 million donation to Tel Aviv University, who joined with Hogeg to launch the Hogeg Blockchain Research Insitute.

The plaintiff also says that Hogeg’s pattern of behavior is “ongoing,” pointing to the ICO that was launched by blockchain news outlet BlockTV in November of this year. BlockTV is owned by Alignment Media, a member of the Alignment Group. Alignment Group is fully owned by Singulariteam, Hogeg’s venture capital fund.

A third lawsuit was filed earlier this year

In a third lawsuit, which was filed in January of this year, a Chinese investor alleged that Stox misappropriated millions of dollars in cryptocurrency that had been invested in the firm, and filed a lawsuit against Hogeg and Stox for $4.6. Specifically, the lawsuit accused Stox of only using $5 million of its $33 million ICO to develop its products. According to CalCalist, the plaintiff “decided to withdraw the suit following a mediation process” in May. The publication cited “documents filed to the Tel Aviv district court.”

In November of 2018, the Times of Israel reported that Tel Aviv judge appointed a temporary liquidator for the company IDC Investdotcom Holdings, otherwise known as Invest.com, following a petition by 17 investors to dissolve the company. The investors claimed that Hogeg, who was acting as the company’s director, had been “freely spending” the $67 million dollars raised in two separate ICOs.

During the same month, rumors that Stox and Hogeg were pulling an exit scam reverberated around the cryptosphere. The company responded to the allegations, which were made by an anonymous source, saying that “this anonymous source re-published a message that was published and already answered more than a year ago (26.9.2017). This source copied the message and shouted ‘Exit scam’ without having any cause whatsoever.”

Finance Magnates reached out to Moshe Hogeg’s spokesperson, Stox, and to Singulariteam for commentary, but did not hear back before press time.