As the price of Bitcoin continues to increase, the value of a certain high-profile BTC investment may have considerably risen since it was announced one month ago.

Crypto analyst Anthony Pompliano wrote on Twitter that: “Tesla bought $1.5 billion of Bitcoin around $33,000. That means they have now made over $1 billion on that investment in less than 45 days,” adding that “Elon Musk is a legend.”

However, Bitcoin bear Peter Schiff was quick to kill Pomp’s buzz with a reminder that “since the #Bitcoin buy was announced Tesla stock has dropped by 9% in a relatively flat market.”

Since the #Bitcoin buy was announced Tesla stock has dropped by 9% in a relatively flat market. So far the purchase is not working out for #Tesla shareholders. It's not a profit until @elonmusk sells. So the jury is still out. Musk may be a legend, but then again so was Custer.

“So far the purchase is not working out for #Tesla shareholders. It’s not a profit until @elonmusk sells,” he said. “So the jury is still out. Musk may be a legend, but then again so was Custer.”

Musk himself, who has recently developed an apparent fixation on DogeCoin, has taken a bit of distance from Tesla’s decision to buy Bitcoin.

In response to a Bloomberg interview with Binance Chief Executive, Changpeng Zhao last week, Musk tweeted that: “Bitcoin is almost as bs as fiat money. The key word is ‘almost’.”

“Tesla’s action is not directly reflective of my opinion. Having some Bitcoin, which is simply a less dumb form of liquidity than cash, is adventurous enough for an S&P500 company,” Musk explained in another tweet. “[…] However, when fiat currency has negative real interest, only a fool wouldn’t look elsewhere.”

In spite of the Tesla-Musk waffling around BTC, Bitcoin has continued to perform well throughout 2021, reaching another net all-time high of more than $58,000 over the weekend.

Although the price of BTC had cooled to $54,450 at press time, certain indicators showed that buying pressure on Bitcoin was still relatively high. At press time, the Bitcoin fear and greed index was reading at ‘extreme greed’. In other words, hodlers were hodling, and looking to buy more coins.

Additionally, the ‘Coinbase premium’, which measures the price of Bitcoin on Coinbase compared to other exchanges, was moving higher. This could be an indication that retail investors were buying more Bitcoin in anticipation of a higher BTC price. At press time, BTC was selling at $54,685.70 on Coinbase and $54,609.30 on Binance. 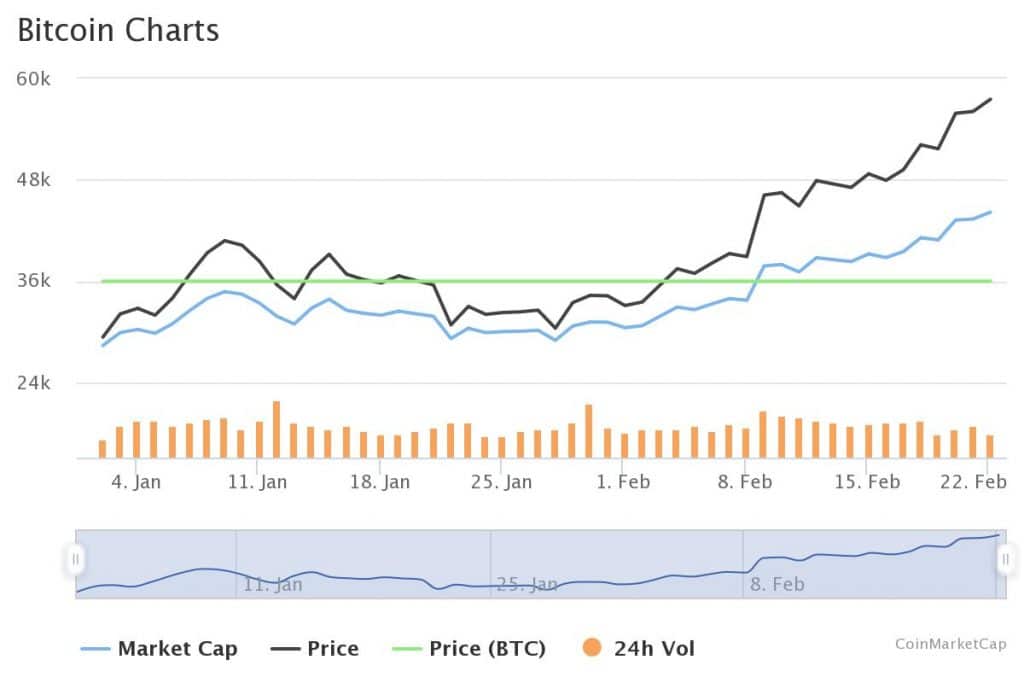