It all began on February 4th: “Doge,” tweeted Tesla Founder, Elon Musk, underneath a picture of a rocket blasting off toward the moon.

Since that fateful day, Elon Musk seems to have caught a bit of an obsession with good ol’ $DOGE. Over the course of the last several days, Musk has tweeted no less than nine times about DogeCoin, mentioning DOGE specifically in no less than six of the Tweets.

“Dogecoin is the people’s crypto,” Musk wrote on February 4th. “no need to be a Gigachad to own…no highs, no lows, only Doge.” Additionally, Musk posted a meme of himself as Rafiki from the Lion King holding a Doge-Simba up to the sun. “Ur welcome,” he whispered, I mean, wrote.

Other celebrities have also jumped on the DOGE train. Snoop Dogg joined in the Fun on Saturday, February 6th, when he tweeted an altered picture of one of his album covers with the words “Snoop Doge.” Snoop tagged Elon Musk.

The same day, KISS frontman, Gene Simmons tweeted that “I bought even more dogecoin. Why? Because I believe it will go up. But, that’s just me.” Simmons also called himself the “God of dogecoin.”

Is This for real?

Then, on Sunday, February 7th, Musk presented a musical number: “🎶Who let the Doge out🎶,” he tweeted.

Later on the same day, Musk linked to an “instructional” Youtube video by YouTuber ZimoNitrome on the…uh…merits of DogeCoin. (The video is actually just an animation of the Doge meme flying in a rocket around the planet earth.)

Additionally, more than 2.4 million people responded to a poll that Musk made on his Twitter account asking about “The future currency of Earth.” Responders had two choices: “Dogecoin to the Moooonn” and “All other crypto combined.” 71.3% of the vote went to the former.

How serious could these celebrities, led by Elon Musk, be about DogeCoin? It is unclear. However, their tweets (especially Musk’s) have had very real consequences: Finance Magnates reported earlier today that DogeCoin has become the world’s 10th-most valuable cryptocurrency by market cap.

Indeed, Musk’s tweets seem to have been a major causative factor in a 40% DOGE price jump within the last 24 hours.

Elon musk tweeted about Doge coin, and in less than an hour it has rose in value at about 50%. He’s Unarguably the Biggest influencer in the world.

However, not everyone is happy about the celebrities’ sudden enthusiasm about DogeCoin. A post with 980 upvotes on the r/Cryptocurrency Reddit page said that “this doge situation is seriously damaging to crypto.”

“Elon Musk literally tweeting ‘Doge’, and it skyrocketing the way it has is just giving more reasons for governments to take legal action against crypto,” wrote the author of the post, user u/Jones9319. 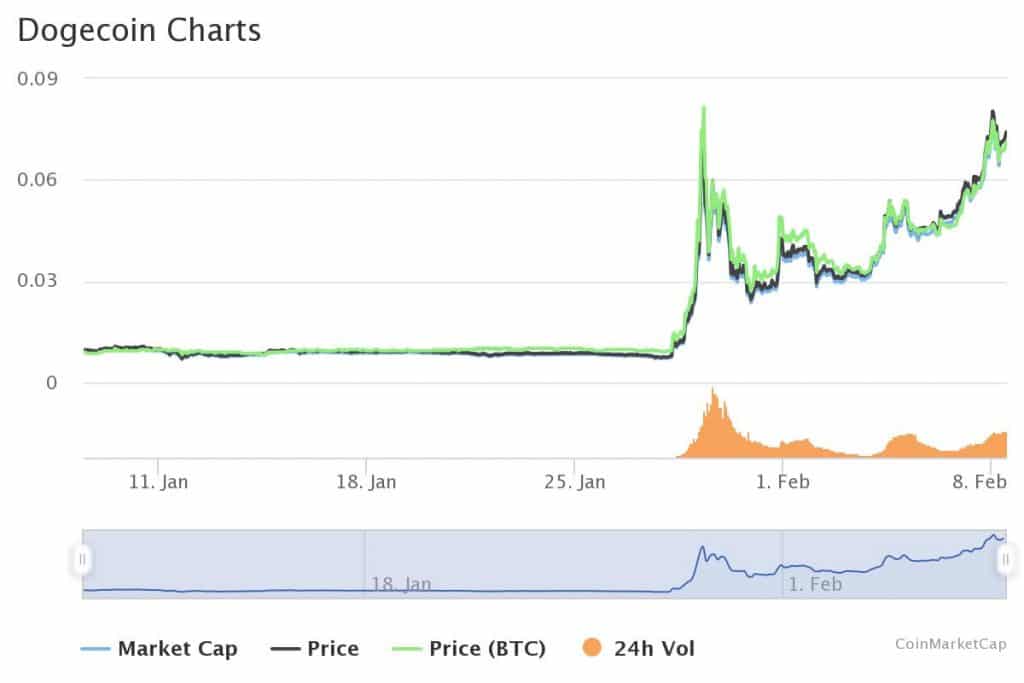 “So many will lose money from this and any credibility Elon Musk has about crypto will be gone. The whole doge thing is funny, sure, but I’m not sure we want mainstream media using it to define crypto as a literal joke.”

And, Elon has joked about crypto in the past: in December, Elon said on Twitter that Bitcoin was “as useless as fiat” money. Moreover, he briefly changed his Twitter bio to “Former CEO of Dogecoin.”

Around the same time, Elon commented during a conversation on social networking app, Clubhouse that “I occasionally make jokes about Dogecoin, but that’s because Doge was made to make fun of crypto assets. The most ironic outcome would be that Dogecoin becomes the currency of earth in the future.”

However, whether or not all of this is a joke, the events of the last several weeks in the investment world have proved that crypto is not the only asset that may be susceptible to crowd-sourced hype. Traders on the r/WallStreetBets subreddit have pumped GameStop Inc (NYSE:GME) from roughly $18 a share one month ago to $64 at press time; at one point, the stock’s price rose as high as $350.

The value of a thing is what someone is willing to pay for it, at this point Doge is worth what people are willing to pay. caveat emptor, as they say. It is a capitalist economy after all, last I checked.