Blockchain, after going mainstream in recent years, has challenged the dominance of established firms in many sectors. However, one industry has been threatened the most – the financial sector.

Though many blockchain firms are continually working on the development of decentralized products to replace traditional banking technologies, one company is always making headlines with its blockchain solutions.

Unlike most of the blockchain industry, Ripple has chosen to work with banks to make their process fast and reliable by introducing blockchain. The company is primarily targeting the high inefficient billion dollar inter-bank money transfer system.

However, even in that niche, the San Francisco-based blockchain company is threatening the dominance of the Society for Worldwide Interbank Financial Telecommunication, better known by its acronym SWIFT, in the sector.

Though Ripple has left its mark on the industry in just a few years, becoming a replacement for SWIFT is not going to be an easy process – especially when the company is determined to fight back.

The Dominance of SWIFT

Founded in 1973, SWIFT has standardized the process followed by global banks. As American Express noted in a report: “A key advantage of the SWIFT network is that it is ubiquitous: more than 11,000 financial institutions use the service worldwide in more than 200 countries and territories, making it possible to transfer money to and from practically every country.”

In December 2018, SWIFT recorded an average of 34.16 million FIN messages per day – an increase of 10.4 percent from a year before, according to the data published by the organization. 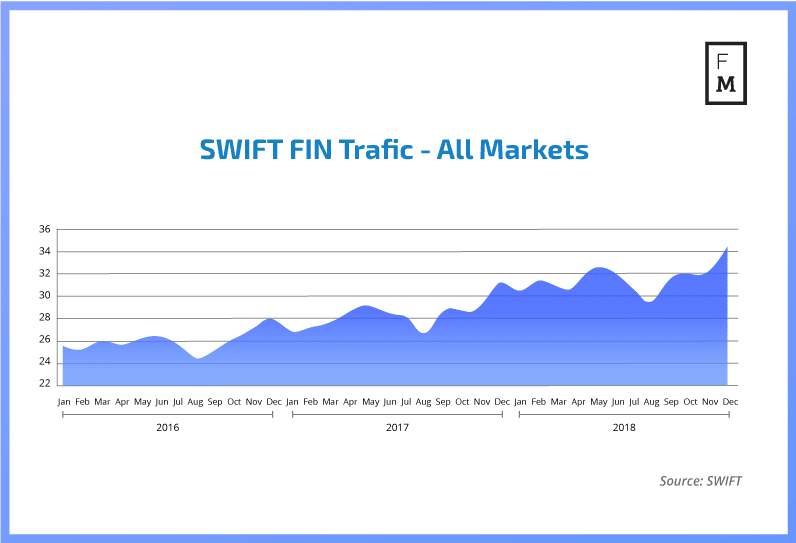 However, SWIFT has some significant flaws. The current standardized method of wire transfers is very slow. It takes hours and often days to pass through different banking checkpoints. Moreover, cross-border payments are also expensive and opaque.

Ripple to the Rescue

To fill the gap created in the payment transfer market, Ripple is developing many blockchain-based bank-specific solutions. The company recently announced that it has on-boarded more than 200 global banks on RippleNet.

With three solutions – xRapid, xCurrent, and xVia – the California-based company is storming into the financial sector. xRapid is focused on transferring cross-border remittances while xCurrent enables banks to settle cross-border payments with end-to-end tracking instantly. xVia, one the other hand, is the company’s standard payment interface. Ripple defines it as a platform for “corporates, payment providers and banks who want to send payments across various networks using a standard interface.”

Last year, Ripple bundled the three solutions to offer all the services to its clients on RippleNet.

To transfer funds between banks, the network is using its native XRP tokens, guaranteeing fast and secure settlements.

In an interview with Fortune  earlier this year, Brad Garlinghouse, Ripple’s CEO, said: “Not many months ago, the media was saying no one will use XRP, which made for good skeptical headlines. Today, you can’t say that as people are starting to use XRapid because it’s better, faster and cheaper.”

In a report published on March 26, the World Bank addressed the issues with cross-border payments. The bank showed its firm belief on decentralized ledger technology (DLT), noting: “DLT-based cross-border payments potentially offer a promising pathway to dramatic improvements in the lives of millions of people in emerging economies. DLT could improve the traceability of remittances and reduce compliance costs for MTOs and supply chain payments, stimulating economic activity in destination countries.”

“In 2018, Ripple, a FinTech company, piloted xRapid, a DLT-based cross-border payments solution, along [with] the very competitive U.S.-Mexico corridor. Financial institutions involved in the pilot saved 40-70 percent in foreign exchange costs, and the average payment times was just over two minutes,” the global lender added. “The transfer of funds on xRapid took two to three seconds, with most of the processing time explained by domestic payment rails and intermediary digital asset exchanges.”

▪︎HUGE!
▪︎RippleNet Adopted To Help South Africa’s Unbanked Problem
▪︎Xago is based in South Africa and has declared that it is using the Ripple blockchain powered RippleNet for fiat and digital assets transfer both locally and globally#XRPcommunityhttps://t.co/1zExmO2JWg

The initiative turned out to be a massive success for the Belgium-headquartered organization, as more than 3,500 banks have so far committed to adopting gpi. Moreover, SWIFT says that more than 55 payment market infrastructures are already exchanging gpi payments, enabling domestic exchange and tracking. 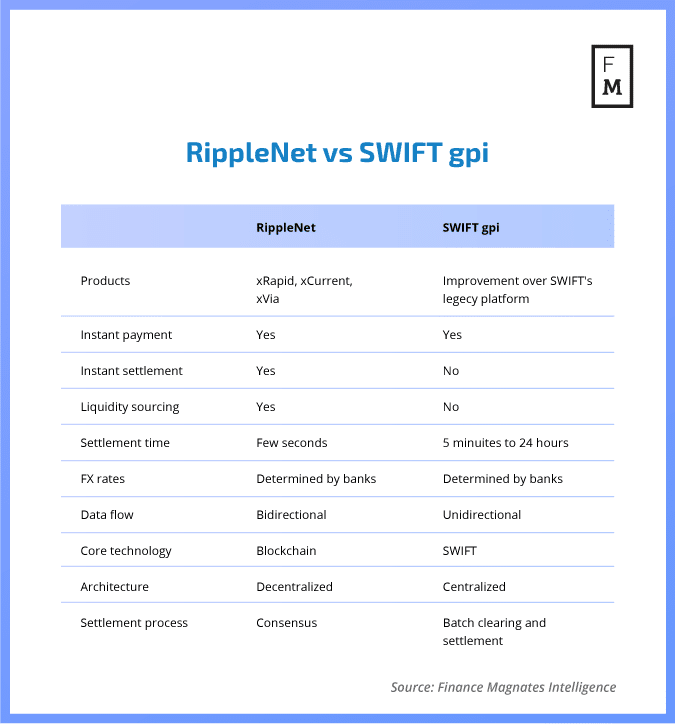 Although many industry experts are comfortable using SWIFT for fund transfers at the moment, they do not deny the impact of Ripple on the payment transfer market.

Commenting on the topic, Kumar Gaurav, founder and CEO of Cashaa, a London-based banking platform focusing on crypto businesses, told Finance Magnates: “As SWIFT is the largest interbank network connected to almost every bank in the world, we are using it and working on optimizing the flow as much as possible.”

“However, as a banking platform, we keep up with the latest and most advanced technologies which are able to move real money and therefore have been following Ripple closely over the past years.”

GPI is not really innovation, it’s an improvement. It’s still not that fast and still needs pre-funding. And if Ripple never showed up, I’m sure it still wouldn’t even be upgraded, which shows the lack of innovative power the company has. Swift needs to focus on the future: XRP.

Acknowledging the rise of blockchain technology in the banking industry, SWIFT is also trying its hands on the decade-old technology. Earlier this year, the Belgium-based organization launched a proof-of-concept (PoC) of a gateway, called gpi Link, for allowing enterprise-centric blockchain solution provider R3 to connect to its existing gpi payment’s network.

However, in a report published after the launch of the PoC, SWIFT stated: “We thoroughly assessed the technology and concluded that it was not yet mature enough for cross-border payments.”

“We are continuing our R&D efforts to explore how and whether our users can benefit from Blockchain and are reviewing how DLT can enrich the features of SWIFT gpi.”

SWIFT GPI is sending over $300bn every day in 148 currencies, soooo probably not going anywhere right away.

No matter what the company says, it is clear that the 46-year old banking technology giant is taking blockchain and the threat of its potential for disruption seriously. In the next couple of years, it will be interesting to see how Ripple proceeds with its partners around the globe to capture the payments market.