The former CEO of e-commerce giant Overstock announced in a blog post on Thursday that he has sold his 13 percent stake in the company with plans to use the $90 million in proceeds to buy “gold, silver, and two flavors of crypto” by the end of the week. Byrne said that he chose these assets because they “are counter-cyclical to the economy.”

The announcement came in a blog post on Byrne’s personal website, DeepCapture.com, where Byrne describes himself as “a concerned citizen who has been hunting the oligarchy since 2004 and the Deep State since 2006.”

Byrne claims that the decision to sell came as a result of “leaks” from the SEC: “when we heard over the weekend that starting last Friday, the Deep State’s pets at the SEC began leaking something to their clients JPMorgan, Morgan Stanley, and Goldman (and here as citizens I bet you thought we were their clients, right? lol).”

“They leaked that they were going to Bazoomba our digital dividend,” he wrote, referring to a new investment product that Overstock announced in July.

“Once that started getting back to me, I realized this: Whenever I have had any question about whether the SEC would or would not do something totally outrageous in order to hurt our company to benefit their clients on Wall Street, they never let me down: they always did the evil thing. So Pettway [Byrne’s financial manager] decided it was time to eject, especially because he knows I need the ammo to go to war against the Deep State.”

Into the deep state or off the deep end?

Overstock has had a long association with cryptocurrency, thanks to Byrne. The company accepted payments in Bitcoin long before cryptocurrencies were popularized in 2017. Overstock also opened tZERO, a security token trading platform, earlier this year, and acquired the company that issues RavenCoin in December of 2018.

In July, Overstock announced the upcoming launch of a crypto dividend–an announcement that helped to boost Overstock’s stock value to a 52-week high. 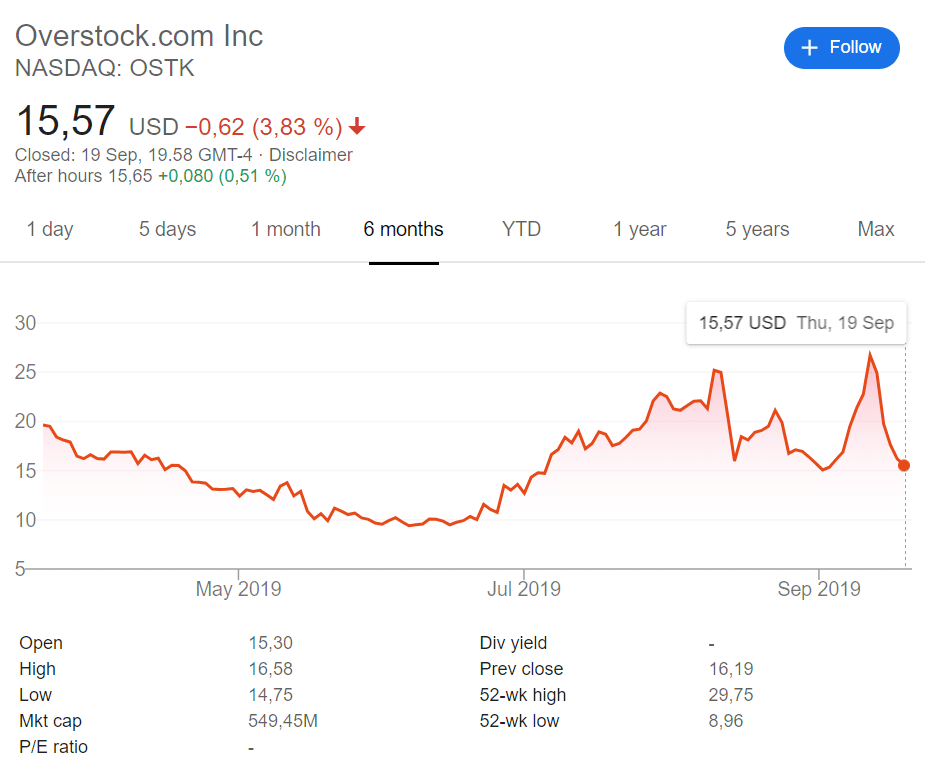 However, Overstock’s stock price has fallen by nearly fifty percent since last Friday, in part because of Byrne’s massive sell-off and because of a press release that Byrne made in August claiming that he assisted in federal investigations surrounding the 2016 elections.

I’m watching former Overstock CEO Patrick Byrne being interviewed on Fox right now and it is completely bonkers. He claims he had knowledge of a deep state conspiracy to set up Hillary Clinton, and Rubio, Cruz, and then Trump, if I am following this correctly.

However, Byrne did say in his blog post that he would be willing to provide “a capital injection if needed by buying back into Overstock.”