Google/Baidu, Facebook/WeChat, YouTube/Youku, Twitter/Weibo – China has long been making its own equivalents of Western technology staples. As cryptocurrency has become more mainstream, Ethereum has become one such staple, and true to form, China has made its own – NEO.

NEO was launched in December 2016 and has been steadily rising in price since July, collecting DApps as startups flock to it to launch their ICOs. It just finished hosting a conference in San Francisco which featured a lineup of new projects.

CEO Feng He Speaking at the NEO DevCon, well-received by the audience ? pic.twitter.com/uYc5TcdVgg

But while many are calling NEO the Chinese Ethereum, in reality this is only partially accurate. The two blockchains do have similarities, but also several fundamental differences.

So what is NEO? Can it be seen as a competitor to Ethereum? This article is an attempt to unpack this subject. 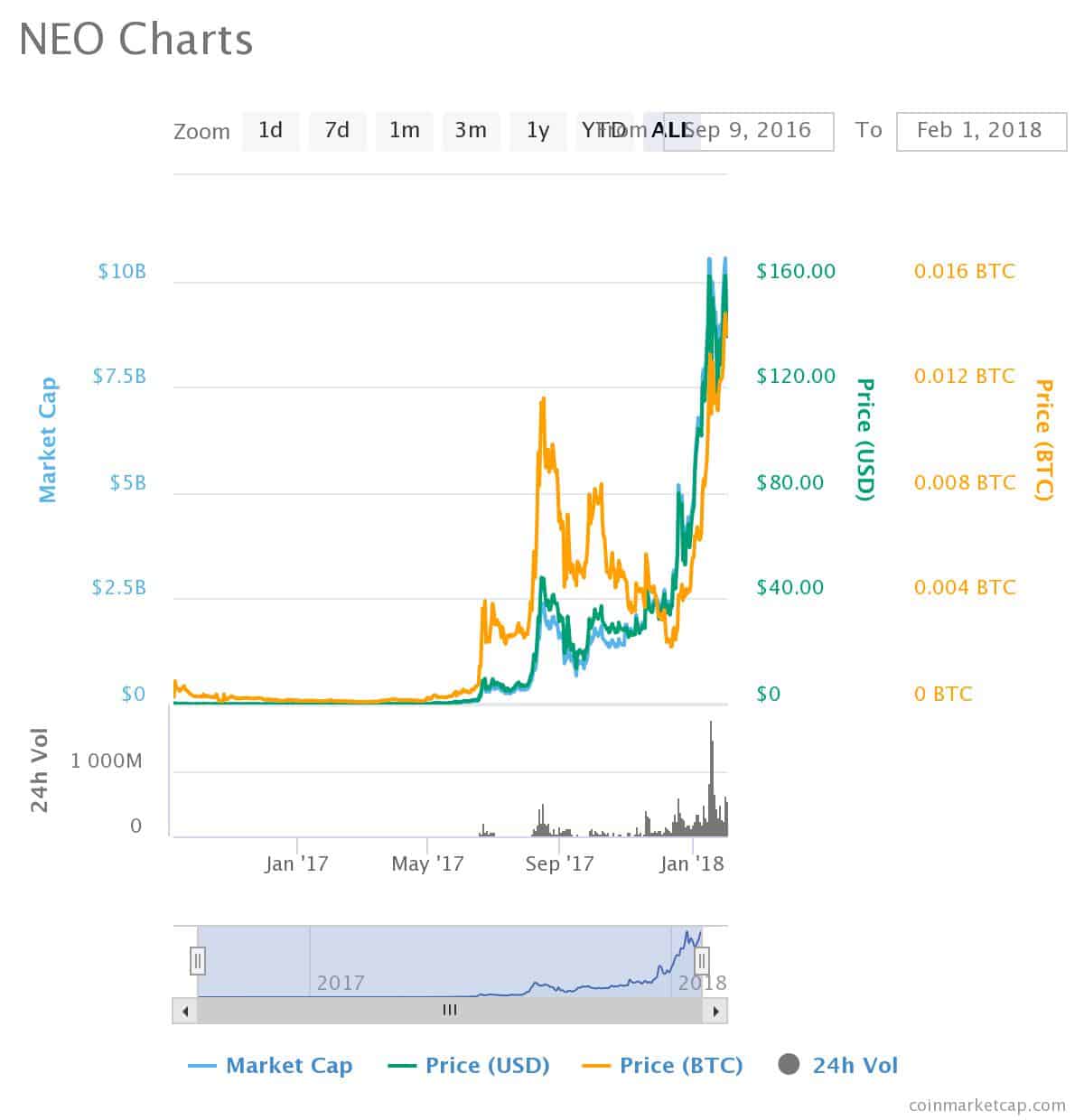 Ethereum has been the second most valuable cryptocurrency by market cap for a long time now. While Bitcoin’s value is largely based on the fact that it was the first cryptocurrency and thus the most well-established, Ethereum’s success is a result of its unique utility – it allows users to write their own smart contracts on top of its blockchain.

A smart contract, or DApp, is a contract written in code, which requires a crypto-token to operate. It takes away the ability of people to cheat the contract, such as often happens in messy reality, because the adjudicator of the contract is a computer.

Smart contract creation is something that NEO, née AntShares, has in common with Ethereum. Both are open source platforms, and both are more than simply holding systems for currencies, although both have cryptocurrencies with real value. NEO currently has 27 DApps listed on its website, offering services from WiFi sharing to courier services to bad weather insurance.

Such a honor to be a part of NEO family. We are proud to unveil Qlink Chain. More partnership to be announced soon. @QlinkMobi pic.twitter.com/DzHzWyU98A

However, while Ethereum aims to “build a more globally accessible, more free and more trustworthy Internet” (official description), NEO aims to build a new economy entirely – a smart one.

Ethereum has gone some way towards achieving its goal, being as it is the base platform for almost all of the world’s ICO projects. It wouldn’t be fair to compare success stories just yet, because NEO is newer and has a much grander aim.

A smart economy is an entire economy based on smart contracts. In such a world, all physical assets would be represented digitally and all transactions and parties to those transactions registered with a digital identity.

A digital identity will be mandatory for participation in the blockchain, and will be set by that blockchain (according to the X.509 certificate, which has been the international standard since 1988). In fact, NEO has already partnered with a project called TheKey – a blockchain-based identification verification tool “which is exclusively authorized by government authorities.”

The word government brings us to another key difference between the two platforms.

Ethereum is supposed to act independently of government, in accordance with the dream of Satoshi Nakamoto. The whole point of the system is that it is decentralised, and its creator Vitalik Buterin is an individual with a great interest in governance systems, as we have written about in the past. The questions that he ponders are necessary for the operation of Ethereum, because it has no government to run it.

NEO, on the other hand, wants to work within the existing system – as Hackernoon points out, “a smart economy will still be under a government and under governmental regulation” – which bodes well for the blockchain if the success of Ripple is anything to go by. This latter system was designed as a payment system to be used by institutions, and its success and partial immunity to price swings is testament to its backing by the establishment.

NEO founders Da Hongfei and Erik Zhang have a sister company called OnChain which has already collaborated with the Japanese Ministry of Economy, Trade and Industry, as well as currently working with a regional government in China and Microsoft China on several projects – no mean feat in a country so hostile to cryptocurrency.

Consensus and the Byzantine generals

NEO, in contrast to Ethereum, can’t fork. This is because of the way the system reaches consensus – by a process called ‘Delegated Byzantine Fault Tolerance‘. Quite a mouthful indeed, and what does the Eastern Roman Empire have to do with anything?? I shall explain.

A city is under siege by an army made up of two groups, each headed by a general. The groups are separated by some distance and communicate by messengers, but between the two camps lies an enemy encampment, meaning that there is an unknown probability of messengers being captured and not delivering the message. In order for the attack to be successful there must be a consensus, because an attack by just one group will fail. How can a consensus be reached when there is no certainty that a messenger will arrive? And even if the message did arrive, how can the sender know that it arrived?

This is a problem central to any operating system which relies on different parts communicating with each other. While in the theoretical example no sure solution exists, in the world of computing there are solutions – a blockchain being one of them.

However, blockchain system consensus can be reached in different ways. Proof of work is a kind of brute force method used by Bitcoin, in which all nodes of the system must agree on every decision made. This has widely publicised drawbacks, one of which being the heavy load on the system which in the case of Bitcoin specifically means that more electricity is used in mining bitcoins than is used by the entire nation of Ireland. Think about how a democracy governed entirely by plebiscite would find governance – very difficult indeed (credit for analogy: Hackernoon).

Ethereum also uses this system (which is why it can only handle 15 transactions a second), but it plans to transition sometime this year to proof of stake. With the proof of stake model, the power of nodes to validate the chain is proportional to how much of the native token each node holds. This alleviates some of the pressures incurred by the proof of work system – it is less heavy, and gives token holders an incentive to uphold the system. Proof of importance, as used by NEM, is a modification of proof of stake, in that the ability to validate the chain is derived from a node’s importance – the amount of tokens it holds + its frequency of activity. This has the same advantage of proof of stake, with an added incentive to be active in the system.

Delegated Byzantine Fault Tolerance, or dBFT, means that representative nodes are elected by token holders to validate the chain. They are known as bookkeepers, and they are the nodes that validate blocks on the chain.

dBFT is a modification of proof of stake. Bookkeepers in the NEO blockchain must reach a 66% consensus to make a decision, which means that it has one big advantage over other kinds of blockchain – it can’t fork. Other major cryptocurrencies have had big problems with this in the past.

Another advantage of this is that as a bookkeeper will have a digital identity, it has a third incentive to uphold the validity of the system (on top of the two described earlier in a proof of importance system). The disadvantage is centralisation, although in a system which doesn’t strive to be independent of government regulation this may not necessarily be a negative, depending on how one sees such things.

Ethereum has one native token, ether, which is gained through mining. No more than 18 million can be created every year, and a block is created every 12 seconds on average. The drawbacks of the proof of work/mining system were described earler.

NEO has two tokens. NEO is the first, and it gives holders voting rights. GAS is the name of the active currency on the blockchain which will be used to pay transaction fees. GAS is created and distributed automatically to NEO holders every time an asset is added to the system. The incentive of the bookkeepers is to keep transaction costs low, to attract more people to the blockchain, and to get more GAS.

So this blockchain is lighter, and is geared towards expanding. A bit like gas.

There are many other technical differences between the two blockchains, many of which seem to favour NEO at the moment. For example, Ethereum only supports a programming language called Solidity, which developers often have to learn especially to interact Ethereum, while NEO supports Python, Go, Java and .Net, meaning that it already covers about 90% of the developer community, according to Techcrunch.

On the other hand, Ethereum is constantly developing and updating itself (one of its recent updates was called Byzantium, but don’t let that confuse you). For example, Buterin recently published an idea that could solve many of the problems that the rampant ICO market has been facing (DAICO).

Compare that with NEO’s inability to fork and desire to install itself into the existing governmental order, and we can see a potential for inflexibility, which could be seen as a negative as compared to Ethereum.

Whether or not NEO will usurp Ethereum as the world’s ICO platform remains to be seen. But NEO is already 7th in the cryptocurrency rankings with a market cap of over 9 billion dollars, according to Coinmarketcap – and NEO comes from China, so it has an enormous home market even before it spreads internationally. So what is certain even at this stage, rankings aside, is that it stands to become a major player in the future economy.