The United States Securities and Exchange Commission (SEC) has played a major role in shaping the ways that regulations affect the cryptocurrency industry, particularly within the last two years. The Commission has issued hundreds of subpoenas, a number of no-action letters, and fought a number of legal battles that have helped bring much-needed regulatory clarity to the space.

However, there is still quite a bit of progress that needs to be made. Several recent instances have revealed that more understanding of how existing regulations apply to the space is still necessary.

Recently, Finance Magnates spoke to securities lawyer Samuel Katz about how investors and token issuers can survive (and even thrive) under the SEC’s jurisdiction.

Katz is a partner at Nellis & Katz LLP, a law firm based in New York. He also acts as the VP and General Counsel for Rivver, Inc., a startup that is using distributed ledger technology to digitize interest in private funds and fund administration. As a lawyer, Katz specializes in issues related to US securities law, fund formation and venture capital, with a focus on digital assets and securities.

Samuel Katz will also appear as a panelist at the upcoming Barcelona trading conference on July 10th and 11th. For more information about the conference, click the image below. 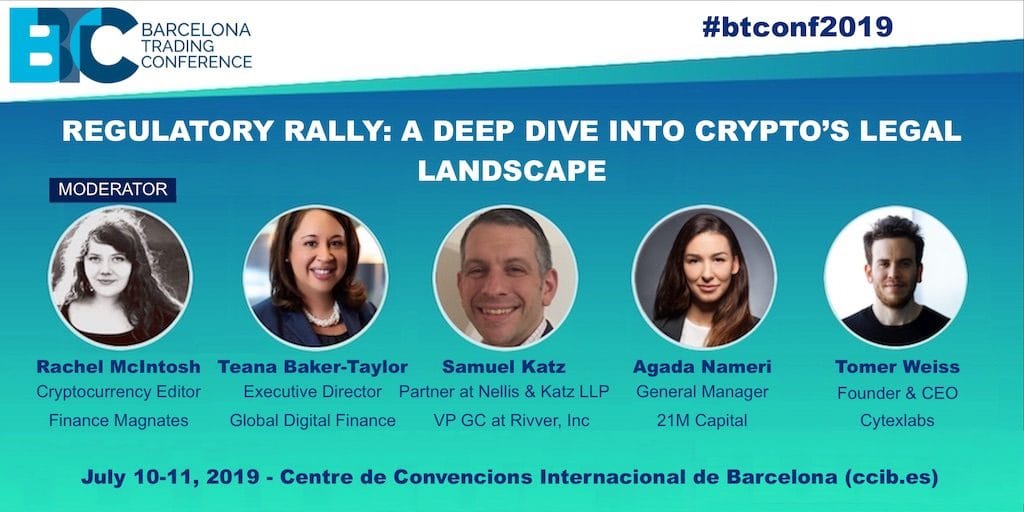 ”Most tokens that we would look at other than, say, Bitcoin and Ether, are very likely to be securities under US securities laws.”

When we asked Katz to give us a rundown on the basics of what crypto industry participants need to know about securities laws, he said that the number of tokens that can be legally classified as securities is likely larger than most people realize.

“What crypto investors need to know about US securities laws at this point is that in the US, to a large degree, most tokens that we would look at other than, say, Bitcoin and Ether, are very likely to be securities under US securities laws.”

So what exactly makes a token a security? “The SEC has provided some guidance as to when a token might not be a security–but in a certain sense, it’s very limited,” Katz explained.

“I’m sure that [most people] have heard of the Howey Test many times, and it’s not necessary to go over that again. But in principle, the SEC is looking for the types of instruments that people are looking to profit off of through the work of a small group of people.”

“That’s really the principle matter, if we take a look, for example, at what the SEC is claiming in its complaint against KIK with respect to the KIN tokens,” Katz continued.

1/Topic 1: Paragraph 114 of the Complaint sets out the SEC’s argument on the expectation of profits, it’s supported by much more than the CEO’s statement and includes statements made in various contexts, including the fact that it would be listed on exchanges. pic.twitter.com/f3TxzT6bbC

“The SEC’s focus on the fact that the tokens were issued with profit in mind, and at the time they were issued, there was a centralized group that controlled the tokens and their functionality, so the SEC had said, ‘ok, those at that time at least were securities.

“Therefore, even though the ultimate intent of the tokens was to have utility, and to be used for payment and for different various purposes on the network that was being created by KIK, and for which they tried to get support from other app developers–still, the SEC said that at that time. It was a security.”

2/ We’re not investors in Kik, but the arguments Kik made in this process are interesting, because they are representative of how the entire industry is dealing with an emerging technology where it’s still unclear which regulations will apply and how.

“So, the answer is that the More SEC Settlements with Crypto Companies ‘Definitely’ Coming–it’s more complicated than that.

”The SEC is limited in what it can do by the laws that have been passed by the United States Congress.”

When asked whether he saw the SEC as supportive or restrictive when it comes to the development of tokenized assets, Katz explained that the SEC’s role in the legal process is In the US is rather restricted itself.

“The [laws] are passed by Congress, and then the SEC’s job is to enforce the law. So the SEC is limited in what it can do by the laws that have been passed by the United States congress,” he said.

“So we have the existing securities laws and the SEC has a certain level of leeway within those laws to make certain dispensations.”

“So, from what I can tell and what I’ve heard–and we’ve all seen the SEC hosting forums and SEC staff speaking in various conferences, stating that they’re encouraging this and that they’re looking into it very carefully and deeply, and getting a better understanding around the technology, and understanding the risks, and that they do recognize the great potential here.”

It’s easy to get behind the #defendcrypto movement to counter the SEC’s approach thus far, but it’s not going to provide the long-term solution needed.

“However, I think that at the same time, the SEC in its role as a protector of investors, is very wary of potentially letting a technology ‘go’ without making sure that all the underlying wheels and rails of the technology work and don’t put investors at risk.”

“So, where you have blockchain technology, there are hacks…and you hear about wash trading happening on exchanges.” Because of these kinds of things, “the SEC starts to get very concerned for investors.”

Therefore, “from the SEC’s perspective itself, taking the existing securities laws [into account], I think the SEC is trying its best, but it’s also particularly protective over investors.”

Transparency is also an important part of what the SEC continuously seeks to enforce.

“The other thing that the SEC’s always been very interested in–and it’s a hallmark of securities laws–is disclosure,” Katz explained. “We do have disclosure regimes under US law, and the SEC wants people as much as possible to stay within those regimes.

“So, I think that the first movers are likely to be those who the SEC is ok with their disclosure once they get a full understanding of how the technology’s going to look and how the trading will work.”

”You need to be extra careful.”

And indeed, there is still some understanding that needs to be had. While the SEC has made quite a bit of progress in establishing clarity within the crypto space with no-action letters and legal cases, there is still some ambiguity when it comes to how securities laws apply to cryptocurrencies.

Therefore, Katz explained that “I think it’s very important companies and any player in the system ensure that they engage experienced and competent securities lawyers because there are a lot of questions.”

“And it even goes beyond securities to some degree…in the US, you have FinCen, you have commodities laws. Whenever you’re dealing with any kind of token–[whether it’s] an asset-backed token, a stablecoin–there are always different legal angles to look at.”

“Whenever you’re going into the US market, it’s really important to get an experienced lawyer, and just tick the boxes–because every different type of asset has a potentially different legal outcome and legal requirement.”

“We’re all hopeful that we’ll find the solutions through existing laws and regulations to make these work, and I think progress is being made.”

Models for disclosure and transparency like @MessariCrypto can be the backbone for this. Models for regulated exchanges exist. Indeed, with additional work and investment, we can build decentralized versions of all of these things. I know the crypto exchanges can afford this.

And at the same time, “we’re seeing that the SEC is going after people. There have been a few public settlements with the SEC, but I think there’s a lot more going on in the background. It was even reported a long time ago that the SEC had sent out hundreds of subpoenas to ICO issuers and exchanges. Those investigations are ongoing; the SEC is very active.”

“So, you need to be extra careful. We will definitely be seeing–over the next few months to a year–a lot more settlements with the SEC, or SEC actions against companies, whether it’s exchanges, companies, people who may be violating broker-dealer laws, all sorts of things like that.”

This was an excerpt. To hear Finance Magnates’ full interview with Sam Katz, click the Soundcloud or Youtube links.