The price of Bitcoin hit another new all-time high this week following the announcement that Tesla, the electric vehicle company founded by Elon Musk, had invested $1.5 billion into Bitcoin. Within 24 hours of the announcement, the price of BTC rose more than 26 percent from roughly $38,000 to just over $48,000.

The firm was not the first large-scale corporation to make a major Bitcoin purchase, after all, Microstrategy, Stone Ridge, Square and a number of other companies have publicly announced multi-million or even multi-billion dollar BTC purchases over the last several months. However, a number of analysts believe that Tesla’s move represents a sort of ‘tipping point’ for Bitcoin, and perhaps for the cryptocurrency industry at large. 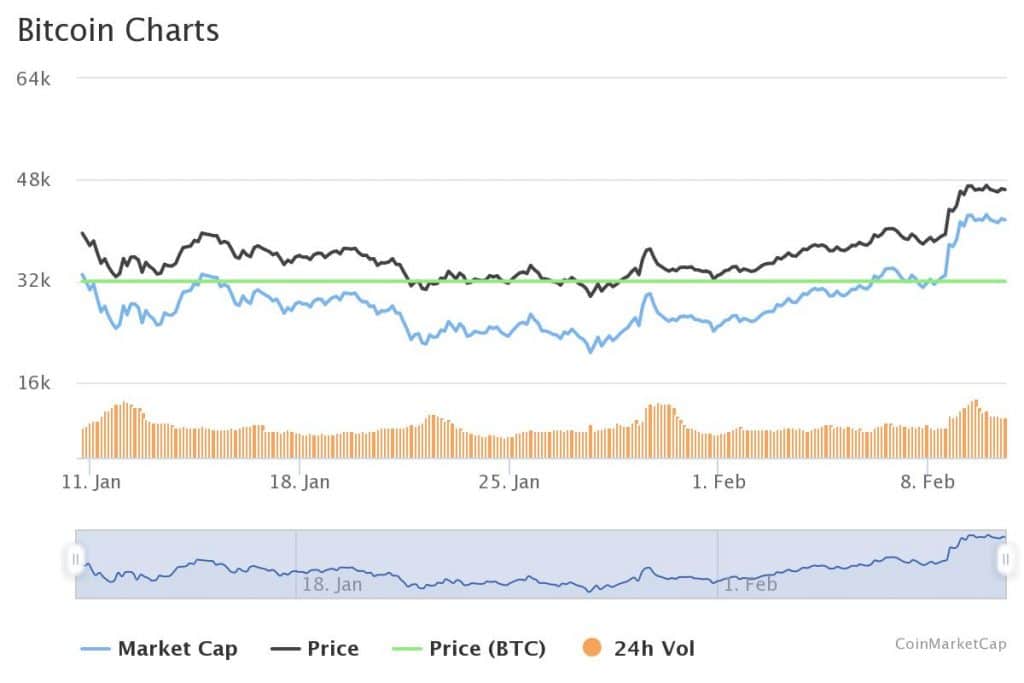 “There may not be any going back,” he said. “I expect bitcoin to be added to the balance sheet of many corporations as its quality as a form of digital gold becomes only more relevant.”

Simon Peters, cryptoasset analyst at multi-asset investment platform, eToro, also told Finance Magnates that: “already there is talk of copycat moves from Apple and Google,” who may buy Bitcoin and “[link] it to their own payment systems.”

“The shift to digital consumption is growing. We expect to see others follow in Tesla’s footsteps, with bitcoin payments increasingly making sense for businesses that conduct nearly all their sales online.”

And indeed, if there is ‘no going back’, then the price of Bitcoin is poised for even bigger gains: “all the stars may be aligning for bitcoin as mainstream adoption happens in real-time.”

“Never Trade with Resources You Are Not Prepared to Lose Entirely.”

Bitfinex’s Paolo Ardoino believes that whenever one is considering an investment in Bitcoin or any other cryptocurrency, it is important to be sure that fear is not a motivating factor, specifically, fear of missing out, or ‘FOMO’.

“Rather than succumb to FOMO, those new to the space should take the time to educate themselves about this amazing technology rather than seeking to speculate on it,” Ardoino told Finance Magnates. “Always do your own research and never trade with resources you are not prepared to lose entirely.”

However, it can be difficult for newer traders to reign in their emotional responses to rapid developments: “meanwhile, attention is turning towards who will be next to jump on the bitcoin train as the space evolves at a breakneck pace,” Ardoino said.

Still, it is incredibly important to remember that what goes up must come down: while it may be tempting to buy Bitcoin while the numbers are flashing green, many analysts anticipate a correction before further gains are possible.

Market analyst Rekt Capital wrote on Twitter on February 9th that: “in 2017, [the] average retrace time #BTC was 16 days,” and the “average correction depth was 35%.”

And things have not changed much, the “most recent #Bitcoin correction from a few weeks ago was 19 days long & -31% deep,” Rekt Capital explained, adding that this was a “totally normal correction,” and that there will be “more like this one” to come “later in this cycle.”

More like this one will come later in this cycle

In other words, it may be wise to wait for a correction before jumping head-first into Bitcoin. If Bitcoin’s typical correction cycle shaves roughly 30-45% off of its price, Bitcoin could go as low as ~$31,500 within the next several weeks.

But, then again, you never really know when moments of change will strike: while Elon Musk had been jokingly hinting at an interest in cryptocurrency over the last several months, there was no major indication that Tesla would be adding Bitcoin to its balance sheet in February, let alone at all. And, if other companies invest in Bitcoin, the timeline will probably be somewhat similar, which is to say, the public will not know when it is about to happen.

“Remember when JP Morgan said #Bitcoin wouldn’t hit 40k again this cycle? Yea. That was like two weeks ago,” wrote Jon, the Chief Product Officer of cryptocurrency exchange, Shapeshift. “Remember that the next time we see a silly prognostication like that after the next correction.”

Remember that the next time we see a silly prognostication like that after the next correction.

However, it can be argued that JPMorgan’s prediction may have come true without the influx of capital into Bitcoin from the Tesla media cycle.

Indeed, for better or for worse, the Bitcoin market is still very much at the mercy of the unexpected, and, depending on who you talk to, this can either be the most compelling reason to buy crypto or to stay as far away from it as you possibly can.

The latter view seems to have been espoused in an opinion piece for the Financial Times entitled: ‘Elon Musk’s effect on crypto world shows how irrational markets are’, in which analyst, Katie Martin wrote that: “just as markets can remain irrational longer than you can remain solvent, amateur investors are demonstrating that their wild speculation can be wilder, and potentially longer lasting, than anything we have seen before.”

In other words, the “memeification” of crypto is a real thing, and it can have outsized effects on cryptocurrency markets. (After all, before Tesla made a $1.5 billion investment into Bitcoin, Elon Musk spent weeks sharing memes about DogeCoin and writing things like “Bitcoin is my safeword.”)

However, on the other hand, a number of crypto industry supporters have argued that the kinds of antics that happen on a fairly regular basis in the cryptocurrency world have been happening for years in the traditional investing world, only, behind the scenes, and within a relatively small group of fairly elite investors.

This was the same sentiment that kicked of the r/WallStreetBets movement that is still pouring money into GameStop (NYSE:GME) and other ‘meme stocks’: if elite traders can make big bets, so can everyone else.

But, while Elon Musk may have joked about DogeCoin, Tesla’s move into Bitcoin is no joke: many analysts agree that this will open the doors for a flow of corporate capital into BTC. Also, Tesla may have already made $300 million to $500 million off of the $1.5 billion that it poured into Bitcoin earlier this month. (That, my friends, is also no joke.)

TSLA is up between $300MM and $500MM on its bitcoin holdings

Perhaps ironically, Tesla’s $300-500 million haul is likely primarily because of the fact that the investment was made public.

Bitcoin is still riding high on the Tesla news cycle. The BTC Fear and Greed Index, which is a measurement of whether traders are more likely to sell (fear) or buy (greed), is reading at ‘extreme greed’. This is an indication that hodlers and hodlers in anticipation of even higher prices in the short-term while the cycle continues over the coming days.

Rekt Capital believes that the current bull cycle could continue for some time, “in 2017, #BTC spent 73% of the entire year in uptrends. [The] average uptrend was ~50 days, [the] longest uptrend was 78 days, [and the] shortest just over a month long.”

“Now that the recent #Bitcoin correction is over, this new uptrend could keep going for at least a month,” Rekt explained.

Shortest just over a month long

Now that the recent #Bitcoin correction is over…

This new uptrend could keep going for at least a monthhttps://t.co/Ea4iIMvvXv pic.twitter.com/zoZmUuBdE8

Therefore, $50K may be in the cards sooner than later, and, as such, perhaps this is some kind of a “tipping point.”

And indeed, while Bitcoin may have seemed like a far-fetched addition to any serious corporation’s balance sheet several years ago, times have changed. COVID-19 has wrought major changes on global society, including the creation of trillions more dollars, euros, pounds, and other fiat currencies, as such, a growing number of retail and institutional investors alike are beginning to see BTC as a hedge against inflation.

Simon Peters told Finance Magnates that: “we believe other companies will also look to hold some bitcoin as both a diversifier, and as an insurance policy against the devaluation of other currencies.”

“This has far-reaching implications for companies,” Peters explained. “If corporates the size of Tesla, valued at nearly $1 trillion, believe bitcoin can be used in this way, and are willing to back its views with action, then others will undoubtedly start to consider it. Tesla has diversified its own business by investing in bitcoin on a grand scale.”

In addition to the changes in global monetary policy, COVID has caused a grand re-wiring in terms of how much time the world spends online: “the world is moving online more and more,” Peters said, adding that “bitcoin sits at the heart of online transactions.”

“With this kind of endorsement from a multi-billion dollar company, it’s likely the price will hit $50,000 by the end of the week.”