The coronavirus has caused epic reorganizations in every corner of the global economy. This is also true in the cryptocurrency futures market.

Much of these changes can be attributed to the economic fallout and BTC price volatility caused by the outbreak of the coronavirus. However, the Bitcoin futures market has also been affected by the Bitcoin halving event that took place earlier this month.

Now that the world is three months into the post-corona era, and the Bitcoin space is two weeks past its most recent halving, how exactly has the Bitcoin derivatives landscape shifted? Has the growth that has occurred on some exchanges–for example, Binance Futures, Huobi Futures, and OKEx–been at the expense of other exchanges, such as BitMEX? And how has price volatility affected the crypto derivatives space more generally?

Price volatility has been a positive thing for crypto derivatives

Ciara Sun, Head of Global Markets at Global Huobi Group, told Finance Magnates that at a basic level, the price volatility that has been brought about by the coronavirus, as well as the Bitcoin halving, has been good for the cryptocurrency derivatives space.

Indeed, “the current economic fallout is driving volatility in both traditional and crypto markets, creating a favorable environment for crypto derivative products to thrive,” Sun said.

“Volatility is a very natural part of market cycles and derivative products like futures contracts and perpetual swaps allow traders to leverage this volatility to create arbitrage opportunities,” she continued.

“Moreover, the current economic climate has revealed digital assets as viable alternatives to traditional currencies as governments and central banks print record sums of new fiat currencies to stave off recession. As such, we’ll see more crypto derivative trading activity through 2020 and beyond, particularly in the institutional sector.”

On a number of cryptocurrency derivatives exchanges, this surge in activity has already begun to materialize: for Huobi Futures, Ciara Sun said that “we’re already seeing a surge in derivatives trading volume.”

There were also surges on several other Bitcoin futures trading platforms, including Binance Futures. In an interview with Finance Magnates, Binance Futures VP Aaron Gong said that his exchange made it to the top of the volume charts “shortly after March 12–’Black Thursday’.”

Although it has since traded places with several other exchanges competing for the top spot since then, “we’re seeing steady growth–the momentum is strong, and still there.”

More institutional interest seems to have materialized on BitMEX, but part of the activity also seems to have been a reorganization of users across exchanges

What has caused this surge of activity?

For one thing, it seems that the increased volatility in the price of Bitcoin after the coronavirus–as well as the attention and press that Bitcoin got around the halving event earlier this month–seems to have attracted quite a bit of institutional attention to the Bitcoin futures space.

However, some of the growth on some futures exchanges may be happening at the expense of others: specifically, there seems to have been a migration from former BitMEX users to other futures exchanges.

This shift seems to have begun on and immediately after March 12, also known as crypto’s ‘Black Thursday,’ when the price of Bitcoin–and the cryptocurrency markets more generally–suddenly shed billions. Within a 24-hour period, the price of Bitcoin dove from roughly $7,600 to approximately $4,700; as Bitcoin’s price was dropping, BitMEX experienced a sudden service outage in the early hours of March 13.

According to CoinMetrics, Bitcoin’s price drop was effectively stopped by the outage as a sort of ‘de facto’ circuit breaker; originally, the outage was thought to have been an infrastructural failure. However, it was later revealed that the outage was the result of a DDoS (distributed denial of service) attack against BitMEX.

Indeed, “on March 13, during the second downward price movement at 2:16 AM UTC, trading on BitMEX slowed to a crawl as the exchange faced what was first thought to be a hardware issue, but was later determined to be an intentional DDOS attack,” CoinMetrics’ post-mortem of the attack reads. “This made it nearly impossible to trade on BitMEX.”

A reorganization of users on derivatives exchanges has brought Binance, Huobi, and OKEx futures’ exchanges to the top–perhaps at BitMEX’ expense

Still, in spite of the fact that the outage was not a failure of BitMEX’s infrastructure, the event seems to have indeed been the primary cause of a migration away from the exchange.

Users seem to have moved away from BitMex and onto other cryptocurrency derivatives exchanges–primarily, Binance Futures, Huobi Futures, and OKEx; the three have traded places as the top futures exchange by volume ever since; open interest on BitMEX has slowly been on a trend towards recovery.

Reports that BitMEX may have been losing its market share to other futures exchanges first emerged in the weeks following Black Thursday and the DDoS attack on the following day; CoinTelegraph reported in Mid-April that BitMEX was “bleeding Bitcoins”: that on “March 13, BitMex held 306,814 Bitcoins (BTC), by April 9, this number had dropped to 222,025.”

According to data from The Block, the trend continued through the end of the month:

Huobi’s Ciara Sun told Finance Magnates that this kind of post-outage reorganization is par for the course: “generally, major exchange outages are usually followed by a redistribution of crypto derivatives traders,” she said, “though the impact a single outage has on an exchange is not easily quantifiable because it also depends on how frequent the outages are.”

“Traders may overlook one or two outages during especially abnormal trading environments, but they’re much more likely to leave if it becomes a regular occurrence,” she said.

“Anecdotally speaking, we do see an uptick in users when there’s a major outage at other crypto derivative exchanges, but it’s not just about the immediate user reaction. Outages impact an exchange’s brand equity and trust in the long run, so they slowly erode customer confidence.”

Therefore, it’s possible that the singular DDoS outage on BitMEX that occurred on March 13 may not be the only reason that users seem to have been exiting the exchange; according to the BitMEX blog, the BitMEX trading engine experienced unscheduled downtime between 12:00 UTC and 13:40 UTC on May 19 as a result of an unexpected server restart.

The exchange has also faced several other public hiccups over the last several months. In early November, BitMEX accidentally revealed thousands of BitMEX users’ email addresses were revealed in a mass announcement that was sent to every user on the exchange.

Additionally, earlier this month, BitMEX was accused in a United States District Court for the Northern District of California of being “deliberately designed, from the ground up” to facilitate “a myriad of illegal activities.” The allegations were made in a new lawsuit filed by Bitcoin Manipulation Abatement (BMA), LLC, against HDR Holdings, the parent company of BitMEX; the case is ongoing.

A spokesperson for HDR Global Trading Limited told Finance Magnates that “We’re aware of two’ copy and paste’ complaints filed by Pavel Pogodin of ‘Consensus Law’, the law firm behind ‘Bitcoin Manipulation Abatement, LLC’ which has also filed complaints against FTX and Ripple Labs. Both complaints against HDR are full of factual errors and are clearly based on rehashed information culled from the internet. We will deal with these complaints through normal litigation processes and are entirely confident the courts will see the claims for what they are. Regrettably, Mr Pogodin continues to operate like a patent troll, filing spurious claims against companies operating in the cryptocurrency space.”

“As you’d expect, we have dedicated in-house teams and external advisers who help ensure that HDR Global Trading Limited’s operations remain fully compliant with relevant laws and regulations in all markets in which our services are available. In addition, we will continue to proactively engage with regulatory authorities around the world, in support of their efforts to establish standards for trading in cryptocurrency products that will underpin the advancement of this rapidly growing asset class.”

BitMEX is aiming for recovery

Christian Arita, product lead at StakerDAO, a Polychain-backed platform for launching and managing decentralized financial assets, told Finance Magnates that BitMEX’s outage was likely a significant part of the reason for the surge on Huobi’s platform–as well as OKEx and Binance.

“Yes – it’s likely that outages have redistributed volumes to other exchanges with better infrastructure,” he said. “If we look at a metric like futures volume, we see that exchanges like Binance and Huobi were earlier to recover and increase volumes after the sharp correction in Bitcoin in early March.”

“Binance and Huobi have also seen open interest recover at an accelerated pace compared to BitMEX. Binance has even surpassed the open interest seen prior to the run up in Q1 2020.”

In response to the reports that BitMEX may be losing users to other derivatives exchanges, a spokesperson from BitMEX told Finance Magnates that “both traditional and cryptocurrency markets have experienced extreme volatility in 2020 as traders navigate their way through the fallout and uncertainty of COVID-19.”

“However, we are encouraged to see BitMEX open interest pick up and spreads tighten to pre-pandemic levels.

BitMEX: “We are not complacent”

Additionally, the spokesperson said that “BitMEX remains the most liquid cryptocurrency derivatives exchange in the market, which underlines the confidence traders have in our platform and the enduring appeal of our innovative products.” 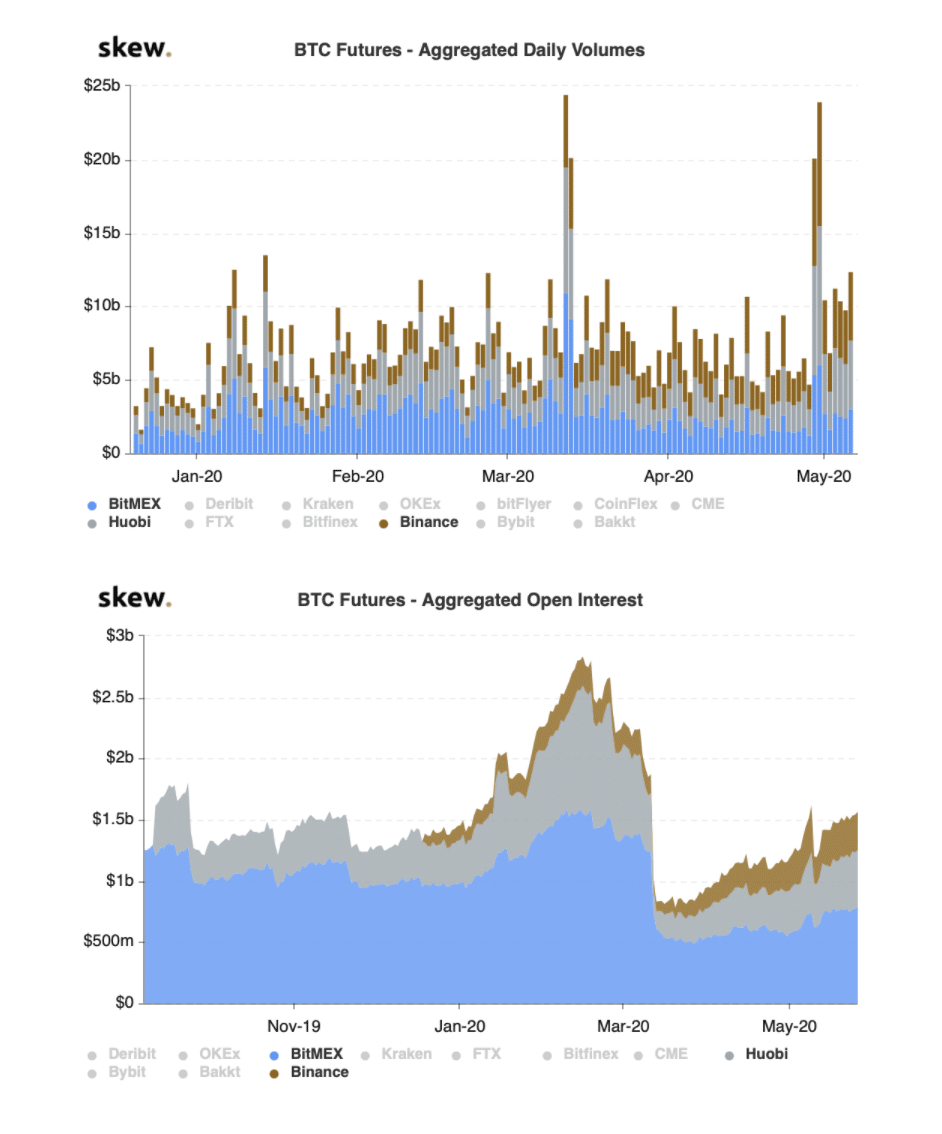 “We are not complacent, though, and continue to focus on developing new products for our users, whilst further building out the resiliency of our platform,” the spokesperson continued, adding that “we’ve been pleased with the market reaction to our new ETH/USD quanto futures contract launched in early May, and we will be announcing further product launches imminently.”

“Our teams are continuously enhancing BitMEX platform infrastructure so that we can continue to provide a best-in-class trading experience for our users as we target near-zero downtime. More details about the unscheduled downtime on May 19 and how we are addressing it can be found in our post-mortem report on the BitMEX blog.”

An industry-wide shift toward better tools for risk management

Other futures exchanges have also made moves toward improving their infrastructure, particularly after the market volatility that came as a result of the coronavirus fallout.

“When the crypto market plummeted in March, many traders on major crypto derivatives exchanges saw their positions suddenly liquidated, causing massive losses and a further drop in prices. But in an effort to protect user assets, Huobi Futures rolled out a new partial liquidation mechanism and a liquidation circuit breaker to prevent unnecessary losses in times of extreme volatility.”

What are your thoughts on the changes in the Bitcoin futures and crypto derivatives markets after coronavirus and the Bitcoin halving? Let us know in the comments below.