China’s relationship with Bitcoin has long been complicated.

Prior to the set of sweeping bans that the government place on the industry in late 2017, the country stood as the nation with the highest BTC trading volume in the world; since the bans–which shut down domestic cryptocurrency exchanges and ended domestic ICOs, among other things–the country has still played a crucial role on the Bitcoin network in the form of hash power.

The process of solving these equations and adding the transactions onto the ledger is called mining–it is executed by individuals and companies that have roomfuls of elaborate and expensive equipment entirely devoted to solving these equations. In exchange for the cost of energy and equipment that these “miners spend to set up their “rigs”, they receive “block rewards” in the form of Bitcoins.

BTC’s mining power is centralized in China–but is that really an issue?

It is a well-known fact that the majority of hash power on the Bitcoin network is produced in China, and has been for quite some time. In December 2019, CoinShares Research reported that indeed, as much as 65 percent of BTC’s hash power resides in China.

However, earlier this month, Brad Garlinghouse, Ripple’s chief executive officer, made a rather controversial remark said CNN–one that seemed to imply that some force located within the country–either a conglomerate of miners or perhaps even the government itself–had strategically supported the building of the BTC mining industry in China so that the nation would somehow be in charge of Bitcoin’s blockchain.

“China… they really, through mining power control the Bitcoin blockchain,” Garlinghouse commented. “You have four miners in China that represent something like 60% plus of the mining capacity,” he continued.

Garlinghouse also mentioned that mining power on the Ethereum (ETH) network, which supports the second-largest cryptocurrency by market cap, is centralized in China. “80 percent of the mining capacity is based in China for both Bitcoin and Ether.”

“So, in many ways, I think China has been incredibly strategic about how they think about that,” he said.

A number of critics fired back on Twitter, target Garlinghouse’s use of the word “miners” instead of the phrase “mining pools”, which may have been more accurate.

I think you meant 4 mining pools???

Perhaps, this was just the slip of the tongue?!

Is there any truth to Garlinghouse’s claims? And even if China isn’t trying to take over Bitcoin and Ethereum, what risks does centralization pose to these networks?

Distribution of hash power is mainly between five entities, according to TokenAnalyst

According to recent research, it would seem that Garlinghouse is correct in his claims–at least about Bitcoin. The Bitcoin network’s hash power is centralized among several players in China is basically correct–although there isn’t much evidence to suggest that these mining entities are working together, or that the Chinese government is somehow using them to its advantage.

Indeed, research firm TokenAnalyst published a report in late January entitled “Centralisation in Bitcoin Mining: A Data-Driven Investigation”, in which it disclosed that “in 2020, bitcoin has also become a highly centralized system that places an increasing amount of trust in a small number of large entities.”

All five of these companies operate under the umbrella of BitDeer, a company that sells customers hashrate out of each of the five pools. Tokenanalyst’s report said that as of “27th January 2020, these 5 mining entities controlled 49.9% of the hashrate of the bitcoin network.” 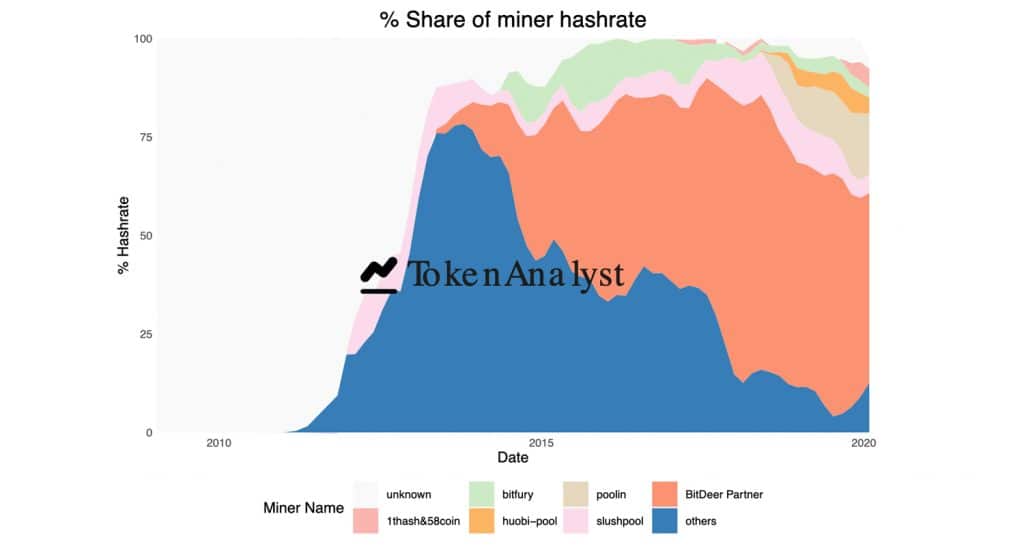 Interestingly, the report also noted that “BitDeer announced a partnership with chip manufacturer Bitmain…who, by agreeing to collaborate, have a powerful way to ensure their AntMiner line of products are used by a cabal of major mining pools at a time when they appeared to be struggling.”

“[Because of] the level of co-operation and trust required to operate this mining model between the mining pools, Bitmain and BitDeer blurs the line between distinct entities.” In other words, Bitmain may be playing a larger role in holding power over these mining entities than it may seem at first glance.

The source of Ethereum’s hash power, however, is a little less well-researched. However, there has been evidence to suggest that hash power on the network is quite centralized, but not necessarily that the majority of Ethereum’s mining power is produced in China.

Why is so much of BTC’s hash power being produced in China? The answer may come down to nothing more than cost.

Jake Yocom-Piatt, Co-Founder & Project Lead for cryptocurrency project Decred.org, told Finance Magnates that “the pattern has been that most miners are located in China because of economies of scale present within China and South East Asia.”

Indeed, Yocom-Piatt explained that this region of the world “is where most of the GPUs and ASICs in use are fabricated.” GPUs and ASICs are pieces of hardware that are integral to Bitcoin mining.

Additionally, the country offers “low prices for electricity (often in remote locations), it is cheaper to build, maintain and staff facilities in China.”

CoinShares’ December report also found that specifically, Bitcoin miners in China’s Sichuan region are responsible for 54 percent of the network’s global hash rate. This may be due to Sichuan’s rainy season, which, through hydroelectric power generators, produces more energy than the region can use.

“Bitcoin mining companies are officially prohibited but are tolerated in the Sichuan province during the wet seasons when hydropower stations generate more electricity than is required, utilizing the excess energy thanks to East Asia’s plum rain,” a CoinTelegraph report explained. This becomes an issue during the dry season when miners take more than their share of electricity.

Is centralization a legitimate security concern?

But how much should Bitcoin users be concerned about the fact that so much of the network’s hash power is being produced in just one country?

There are, of course, geographical and geopolitical concerns: after all, reports emerged earlier this month that Chinese authorities have been shutting down Bitcoin mining farms to contain the spread of the Coronavirus.

Beyond that, though, over-centralization can lead to “51% Attacks”–which is to say that if a single entity or a coordinated group of entities have control of more than half of the hash power on a blockchain, they can use that hash power to erase and rewrite transactions on a blockchain, which can effectively destroy a network.

However, it doesn’t seem like the possibility of a 51% Attack by Chinese mining entities is on the horizon.

“This fact is not as alarming as people make it out to be, though, for the following reasons. A spokesperson from cryptocurrency education firm CryptoVantage told Finance Magnates that “China [itself] is not directly in control of all of those computers.”

“It is not the case that China has a harness or a method of driving these computers,” the spokesperson explained. “So the network is not under the threat of a 51% attack like many people like to think.”

Olga Feldmeier, chief executive of security token exchange firm Smart Valor, also commented during an interview with Finance Magnates in 2018 that she is not concerned about centralization on the Bitcoin network.

“To be honest, I used to be really worried about it–about two years ago, I was really checking the numbers to see which pool is connected to which pool and if they would ever reach 51 percent, [wondering] ‘will I lose all my Bitcoins?’”, she said.

“But the way the Bitcoin network functions, there are certain incentives in the system,” she said, explaining that it’s not in the best interest of mining pools to manipulate the Bitcoin network. “All those miners, at the end of the day, their business depends upon this network being alive and working.”

“If they collude, and kill it, there will be no future avenues and no future business for them.”

Is a change in consensus mechanism the only way out of centralization?

And while the alarm bells over-centralization may have been rung once again in recent months, there are a number of analysts who will argue that centralization has been a problem since the beginning of Bitcoin–and will remain an issue as long as Bitcoin has a Proof-of-Work consensus mechanism.

“Bitcoin is roughly as centralized now as it was years ago when I showed up to the space in early 2013,” Jake Yocom-Piatt commented. Today, “a few ASICs manufacturers make all the miners, several Chinese outfits dominate the network hash rate, and several developers dominate the core software development process,” just as they did seven years ago.

Yocom-Piatt believes that if anything, the network has become more centralized: “a notable change with centralization in Bitcoin is that there used to be a narrative that Proof-of-Work (PoW) had sovereignty in the network, and this has since been replaced with the narrative that only developers and full node operators have sovereignty.”

Therefore, he believes that “the only way to make mining fairer (and more decentralized) is to use Proof-of-Stake (PoS),” another kind of consensus mechanism that doesn’t rely on purchasing and running roomfuls of expensive equipment in order to confirm transactions and earn rewards.

However, Yocom-Piatt sees an issue with pure PoS mechanisms, too, a factor that led his own project, as well as the Ethereum network, to develop blended consensus mechanisms that use aspects of both PoW and PoS.

“The trouble with pure PoS consensus systems is that they reward people for doing very little and become an entitlement system,” he explained. “They also have stability issues because there is ‘nothing at stake’ when choosing a particular block to mine on. This is what led us to blend PoW and PoS in Decred.”

What are your thoughts on centralization on the Bitcoin network? Do you believe that mining pools in China hold too much power? Let us know in the comments below.

Great article. Very well elaborated for any Bitcoin enthuiastic. Am looking forward for more knowledge on this topic.Thanks

So roughly 82% of the BTC mining takes place in: China, Russia, Iran, Kazakhstan and Venezuela; so what’s to keep those governments from someday “pulling the plug” to create chaos in the western countries, or organizing an 82% takedown in hopes of killing the US Dollar as the reserve currency, etc.????