Facebook’s June announcement the Libra project sent large parts of the world’s regulatory and financial spheres into a flurry of activity. In the US and the EU, hearings were scheduled, and task forces formed. In other parts of the world, governments of developing countries began to take preemptive measures to keep the coin out of the hands of their citizens.

China’s reaction to Libra, however, was unique. Rather than taking direct action against Libra, the announcement seemed to spur China to quickly complete the stablecoin initiative that it had begun working on several years ago as a competitor to Facebook’s proposed currency.

Now, the launch of the stablecoin, dubbed DCEP (Digital Currency/Electronic Payments), is imminent; at the same time, Facebook has said that Libra may never launch. For now, it seems that China may have beat the tech giant at its own game.

But the rules have changed: now, several other tech giants are eyeing the stablecoin space. In particular, malta-based cryptocurrency exchange Binance has announced the launch of the Venus project, which will create regional stablecoins backed by local currencies, and seems to have given the Chinese market a lot of special attention.

Could the launch of the DCEP eventually open the doors for privately-issued stablecoins backed by Chinese Yuan to operate in China? And what could China’s real intentions behind issuing this stablecoin be?

Here’s what we know: China began working on the development of a digital currency roughly five years ago. The country’s decision to suddenly push forward with the launch appears to have been motivated by Facebook’s efforts to launch Libra, its global stablecoin initiative.

In July, PBoC director Wang Xin said that Libra could “could create a scenario under which sovereign currencies would coexist with U.S. dollar-centric digital currencies. But there would be in essence one boss, that is the U.S. dollar and the United States. If so, it would bring a series of economic, financial and even international political consequences.”

Although Facebook publicly stated later in the month that Libra may never see the light of day, it was already too late–China’s quest to create a competing coin was on.

In a statement made on August 2nd, the People’s Bank of China (PBoC) summarized the outcomes of a video conference in which the bank presented its priorities regarding economic and financial initiatives to the Party Central Committee and the State Council. During the meeting, PBoC suggested that the country should accelerate the research and development of its digital currency.

Then, on August 10th, PBoC deputy director Mu Changchun announced at the China Finance 40 Forum that DCEP “can now be said to be ready.”

Details on distribution and technology are still somewhat vague

In the same speech, Mu explained that issuing the digital currency using a system built exclusively on blockchain technology would be impractical due to the fact that there are so many retailers within the country that would require high concurrency performance.

On August 27th, Forbes reported that according to Paul Schulte, who worked as global head of financial strategy for China Construction Bank until 2012, several major institutions within the country would be tasked with distributing the digital currency: the Industrial and Commercial Bank of China and the Bank of China (the two largest banks in the world), as well as the Agricultural Bank of China. Also included are Alibaba and Tencent, two of China’s largest financial technology companies. Union Pay, an association of Chinese banks, is also slated to receive the cryptocurrency.

The institutions could begin distributing the digital currency on November 11th, which is one of the country’s largest shopping days of the year.

PBoC has not released any technical details about the network, although a research report by cryptocurrency exchange Binance said that it could be used to facilitate the processing of more than 300,000 transactions per second. Because this kind of transaction volume is currently impossible using blockchain, Binance raised questions over the type of technology that will be used to power the network.

A method of surveillance?

And indeed, a number of analysts have pointed to the fact that China’s digital currency won’t really be a “cryptocurrency” at all.

“The new digital currency will have many traits that make it more akin to a centralized digital currency then a true cryptocurrency,” said analyst Roger Huang in an article for Forbes. Huang specializes in writing about the social impact of blockchain. “It might be more accurate to say that the PBOC is looking to release digital cash with extra surveillance.”

Mati Greenspan, senior analyst at eToro, made a similar prediction: “they want a greater level of control and surveillance,” Greenspan told CoinTelegraph.

“This will give them a bit more hands-on authority. This currency is not designed to give people financial freedom, like other forms of crypto, but rather to provide the Chinese government with a way to monitor transactions.”

However, a report on the digital currency by Binance said that the system would most likely be designed in such a way that bank accounts would not be necessary to transfer funds, making it possible for the cryptocurrency to operate a bit like digital cash (although KYC checks will almost certainly be necessary.)

“The end goal for the CBDC is to display a turnover rate as high as cash, while achieving ‘manageable anonymity,’” the report says. “In other words, in the first-layer network of the CBDC, real-name institutions are expected to be registered while the transfer in the second-layer network would be anonymous from the perspective of users.”

Additionally, Mu Changchu stated in his August 10th speech that China’s DCEP would aim to “strike a balance between anonymity and the AML/CFT/ATA work.”

Binance explained that for this reason, “China’s CBDC is less likely to be an instrument of illegal activities even if it were anonymous like cash, as both the PBoC and financial institutions on the second layer would have the ability to immediately freeze any CBDC or accounts if they were involved in suspicious transactions, helping deter illicit activity on the network.”

The digital currency may also be directed at growing the country’s economy, according to Nicholas Krapels, who serves as Blockchain Lead at Konstellation and Managing Director at DarcMatter China. “Putting the DCEP into the hands of Chinese consumers will increase RMB internationalization and the velocity of money,” he told Finance Magnates. 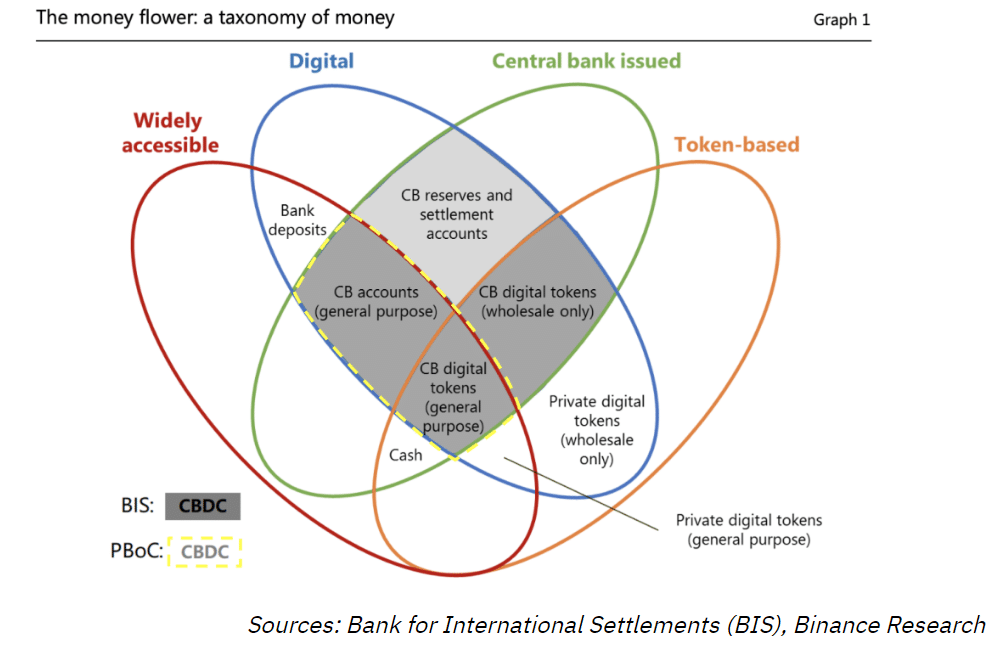 “Let’s examine this impact from the perspective of the quantity theory of money (MV=PY). China has been relying on huge increases in its money supply (M) to provide inorganic growth in the country in an attempt to stave off a potential debt crisis,” he continued. “And yet, despite printing money at something like an 8+% rate per year since the financial crisis of 2008, price inflation (P) and the GDP (Y) have continued to stagnate.”

In other words, “Growth is declining.” However, “by introducing the DCEP to Chinese consumers, the PBoC may be hoping that they can start to reduce the growth in the money supply (M) by vastly increasing the velocity of money (V) by eliminating almost all barriers to transacting with the DCEP.”

“Currently, even though China is pretty much cashless in the first tier cities, there are still barriers such as you cannot transfer value easily from Alipay to WeChat Pay or from one bank account to another without incurring fees and delay,” Krapels explained. “A DCEP could drastically improve this situation and help to support GDP growth without the debt crisis risks that using the money supply lever imposes on society.”

Could privately-issued stablecoins ever be allowed in China?

But if the primary goal of the Chinese government is growth, would it be possible that the country would ever allow widespread use of privately-issued stablecoins that are fully- or partially-pegged to the Chinese Yuan (CNY)?

After all, there is a possibility that the “basket of currencies” that Libra will be pegged to (if it is ever launched) could include a substantial amount of CNY. Additionally, Binance’ Venus project, which aims to create a number of regional stablecoins tied to local cryptocurrencies, could create a CNY-backed digital currency.

Krapels said that in both cases, the answer is very likely to be “no.”

As for Facebook’s project, “Libra will definitely not be allowed in China,” Krapels said. “Facebook, Whatsapp, and Instagram are all blocked, so how would it even get distributed?”

Venus’ situation is slightly more ambiguous. Krapels said that Binance CEO Changpeng Zhao “is not dumb enough to blatantly operate against the rules of the country,” as Libra seems to be attempting to do, although “he may cooperate with others to create a CNH stablecoin, as Tether recently announced it was considering.”

“But to make a CNY-backed stablecoin backed by real CNY assets would be met with extreme resistance, especially now that the DCEP launch is so close.”

“However, there are other ways to peg a stablecoin’s value to the value of 1 CNY without having to use CNY as the reserve asset. It’s [decentralized finance]–someone will come up with some kind of novel solution sooner rather than later! The key will be operating in the HK or SG sandboxes, where regulatory authorities can have access to your data and input into the development of your business model. Whoever does that will eventually be allowed into China in some capacity, I think.”

Despite the difficulties ahead, it does seem like Binance is subtly attempting to win the hearts of Chinese regulators. For one thing, CoinDesk contributor Dovey Wan pointed out that the language in the Chinese announcement of Venus was much richer than the English-language announcement.

a side by side read of the English announcement vs the Chinese announcementhttps://t.co/101UpGy5QL

TLDR; The English one is just an announcement the Chinese one is a manifesto

Additionally, in an interview with Bloomberg, Binance co-founder He Yi described Venus as a “Belt as well as Road variation of Libra,” referencing the country’s One Belt, One Road initiative.

He Yi also said that “We believe that in the near and long term, stablecoins will progressively replace traditional fiat currencies in countries around the world, and bring a new and balanced standard of the digital economy.”

While it may not be probable in the near future, it’s certainly possible that a global movement toward both government- and privately-issued digital currencies could eventually soften China’s views on allowing privately-issued stablecoins to operate within the country.

However, the world is still a long way from truly embracing digital currency: “it’s going to take both governments that are forward-thinking and experimental enough to support the introduction of CBDC and Big Tech that is ubiquitous and trustworthy enough to assist in the distribution of that CBDC through their apps and platforms,’ Krapels said.

“If you have a country which is largely not supportive of crypto like the US, then its Big Tech will struggle to innovate defi. But if you have the opposite – a country that supports crypto but doesn’t really have a Big Tech sector, like Singapore – you will struggle with the most important part of fintech solutions, which is adoption.”