The drama surrounding Brexit, the possible exodus of the United Kingdom from the European Union, has rocked financial markets the world for the last two years.

Indeed, the “will they, won’t they” effect of the ongoing approach toward deadlines, the continuous postponements, and the inability to reach agreements on exactly what should be done, how it should be handled, or when it should happen has kept the EU–and the world–on edge; everything will have to be organized, from resident Visa statuses to trade agreements to industrial strategy.

What’s more, is that only some of the possible impacts of Brexit (deal or no-deal) can be known.

“With Brexit still very much a hot topic it continues to cause many fractions between people and their opinions,” said Sukhi Jutla, co-founder of UK-based gold jewelry B2B platform MarketOrders, to Finance Magnates. “No doubt there is no shortage of fear-mongering by those who want to stay in the EU and there is still a lot of indecision by those who are meant to lead us out of the EU on time and budget.”

“And against this background of chaos, there are plenty of individuals and businesses who are trying to predict what the real impact of Brexit will have on them and their business and livelihood.”

In some ways, however, the impact of Brexit on the global financial industry is somewhat foreseeable. In an article for the World Economic Forum, Jonathan Faull, Chair of European Public Affairs at the Brunswick Group, wrote that “when the United Kingdom eventually leaves the European Union – assuming it does – it will take Europe’s biggest capital market with it.”

“The loss of the City of London could drive the EU’s 27 remaining members to pursue an inward-looking strategy for managing their capital markets,” he wrote. A number of analysts have predicted that Brexit will cause upheaval and downward trends in capital markets in both the UK and the EU.”

(And, lest we forget what’s already taken place:)

S&P 500 Index lost more than 35 points and broke 2000 level today! What happens next? Make your prediction with #Cindicator $SPY #Brexit

But how could Brexit–with or without a deal–impact the cryptocurrency industry?

As far as the possible effects of Brexit on cryptocurrency prices, the jury is still out: “even though the news of Brexit has affected the UK economy over the past two years, I don’t really see this as playing a major role in the price of crypto,” Eric Benz, CEO of cryptocurrency exchange Changelly, said to Finance Magnates.

“We might see a bit of a spike once Brexit is official but it won’t be significant enough to make the market really move. Crypto does not have any borders nor is dependent on jurisdictional restrictions currently (unless you are China, of course.)”

Therefore, “I expect the price to be stable one Brexit takes place and in the post Brexit aftermath,” Benz said.

However, other analysts have pointed out that cryptocurrency markets have benefited from political upheaval in the past–take, for example, financial crises in Venezuela and Argentina, as well as the influence of the US-China trade war on the price of BTC. (Indeed, “When the yuan slides, Bitcoin climbs,” wrote Investopedia author Matthew Johnston.)

And while it’s impossible to predict the short- and long-term effects of Brexit on the Great British Pound (GBP), the negative movement could potentially have a positive effect on cryptocurrency markets, perhaps particularly in the price of Bitcoin (BTC).

Sukhi Jutla told Finance Magnates that “Historically in times of uncertainty and chaos, many people will rush to the safety of commodities such as gold. This is why there is little surprise that the price of gold has been inching up daily. Gold is seen as a safe haven, a way to minimize risk by putting your eggs into a safety basket. Gold is real and it is a store of value.”

“Could this then be why the price of Bitcoin will also start surging as we head closer to Brexit day?” Jutla asked. “Bitcoin, a digital currency still in its infancy has defied critics to become a well-respected store of value. Though there is still a lot of contention between governments not recognizing it as a currency, they have relented and agreed Bitcoin can be seen as a store of value.”

Mitesh Shah, founder and CEO of crypto startup Omnia Markets, echoed Jutla’s statements. He told Finance Magnates that “we can speculate that due to the uncertainty in the markets and the regulatory outcome could lead investors to pursue cryptocurrency as an investment opportunity, or at least as a temporary safe haven against potential volatility affecting the British pound.”

(When the results of the Brexit referendum were announced on June 23, 2016, the price of BTC did see a small boost, although there were far fewer users of BTC at that time–the market cap was just ~$10.5 billion, compared to today’s market cap of $135.2 billion.) 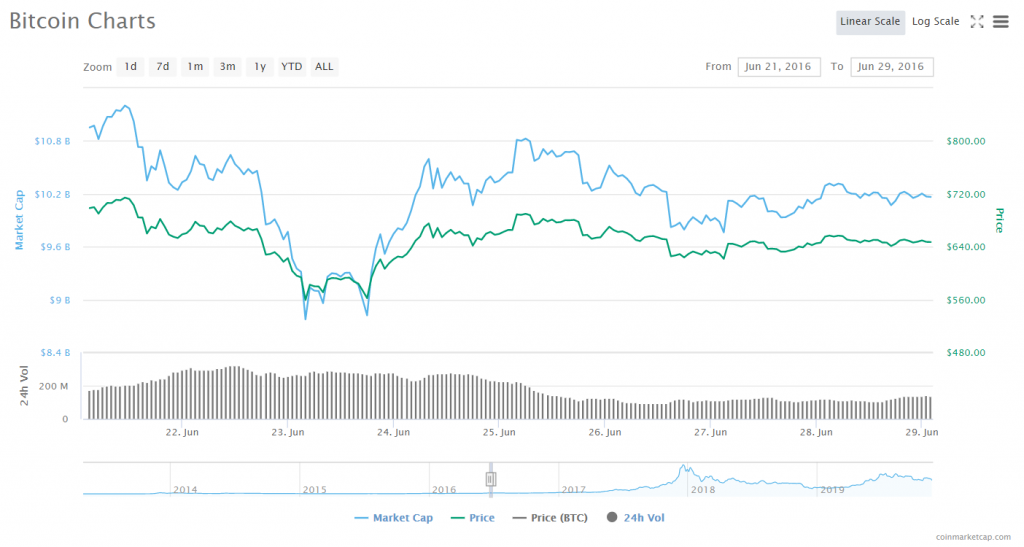 Shah also said that he believes if Brexit has had any effect on cryptocurrency markets so far, it has been a positive one. “The effect appears to be positive so far,” he said.

And indeed, a study by “hybrid intelligence blog” Cindicator earlier this year showed that “about 62% of financial analysts registered on its platform believe that Brexit will have a positive impact on cryptocurrency prices”, and that “74% of analysts are considering holding cryptocurrency in their portfolios along with other assets such as commodities, stocks and cash.”

The post-Brexit regulatory future of crypto in the UK

Although the possible effects of Brexit on cryptocurrency prices are debatable, the impact of regulatory and logistical effects on companies operating in the UK is virtually undeniable. “With Brexit on the horizon, many companies will be affected. Crypto is just one of many industries that will have to adjust to new legal requirements set forth by the UK government.”

“This will, of course, have a knock-on effect to the users who use UK based crypto services. In my opinion, the effect on these users will be minimal whereas the UK crypto services such as exchanges will be much more affected.”

Indeed, the regulatory results of Brexit and the separate regulatory paths that could potentially form in the UK and the EU could have some important implications for cryptocurrency companies based outside the UK who wish to continue operating there.

“There are already some UK-specific requirements for cryptocurrency businesses,” Eric Benz said to Finance Magnates. “UK-based crypto services have to now go through the specific UK licensing and update their business processes to adjust to the new regulations and policies stipulated by the UK government.”

According to Comply Advantage, these requirements mean that “cryptocurrency exchanges in the UK generally need to register with the Financial Conduct Authority (FCA) – although some crypto businesses may be able to obtain an e-license, instead.”

One example of this, as Best Bitcoin Exchange pointed out, is Coinbase. The popular cryptocurrency exchange app was granted an e-money license from the Financial Conduct Authority (FCA) in 2018.

The license “allows the company to issue e-money and provide payment services in the UK,” and while the UK is still a part of the EU, the license “also extends to 23 countries within the European Union.”

However, “after the UK exits the EU, this will no longer be the case.”

Despite the limitations that Brexit would pose on the e-license, Zeeshan Feroz, CEO of Coinbase UK, told Business Insider that his company was committed to the British market.

“The UK is a huge market for us, Brexit or no Brexit,” he said, citing the UK’s talent pool: “we’ve got access to a type of talent pool you can’t really get anywhere else besides the UK in Europe. We certainly intend to invest significantly in the UK office and the headquarters here. The roles we’re hiring from range from engineering to compliance and everything in between.”

Still, the company has already begun to prepare for post-Brexit operations; Bloomberg reported in 2018 that Coinbase opened an office in Dublin as part of a post-Brexit contingency plan.

Savvy cryptocurrency exchanges could also see the post-Brexit divide between the UK and the EU as an opportunity.

Malta-based cryptocurrency exchange Binance allegedly opened a crypto exchange in Jersey (a self-regulating dependency of the UK) for just this reason: according to Best Bitcoin Exchange, the exchange “offers fiat-to-crypto trading, allowing users to buy and sell Bitcoin and Ethereum with pounds and euros.”

Indeed, a Forbes report cited Binance chief financial officer Wei Zhou as saying that “expanding the cryptocurrency exchange markets with fiat currencies in the European region is opening new economic opportunities for Europeans as well as freedom from looming Brexit uncertainty where the pound and euro are also in concern,”

“Through Binance Jersey, we want to help bridge the crypto-fiat channel for Europe and the U.K. as part of our global expansion to support broader cryptocurrency adoption.”

Will the world panic in the face of fear?

And these savvy cryptocurrency exchanges–like cryptocurrencies themselves–could stand to benefit from the uncertainty surrounding Brexit, particularly if a no-deal Brexit is the only path forward.

“With the uncertainty still surrounding Brexit, we will continue to see erratic behaviour across the money markets and this will also include the value of the pound,” Sukhi Jutla said.

“In this case, I predict there will a flurry of activity in the gold and Bitcoin markets, driving both of these assets market prices upwards. In times of chaos and uncertainty, we think we do the most logical and rational things, but all we do is panic in the face of fear and this will cause the price of the pound to plummet.”

What are your thoughts on how Brexit will impact crypto? Let us know in the comments below.