The number 10,000 seems to be almost mythological in the world of Bitcoin.

It seems that factions of the crypto community, as well as onlookers in the rest of the world, have latched onto the Bitcoin’s $10,000 price point as a sort of point of critical inversion: if BTC can surpass–and hold–the $10k support level, then surely it must be taken very seriously: for some, $10k represents evidence of an inevitable trajectory toward mass adoption; for others, a well-established $10k price level is evidence that meaningful institutional capital has been locked into the network.

This may be part of the reason, then, that $10,000 seems to be a sort of sticking point for Bitcoin network: a milestone that warrants celebration when surpassed, and quiet defeat when the price of BTC slips back under it.

Historically speaking, there have been a few important moments of exactly this kind of quiet defeat: BTC seems to reach up to–and even past–$10,000, only to run out of steam shortly after, and fall back down. 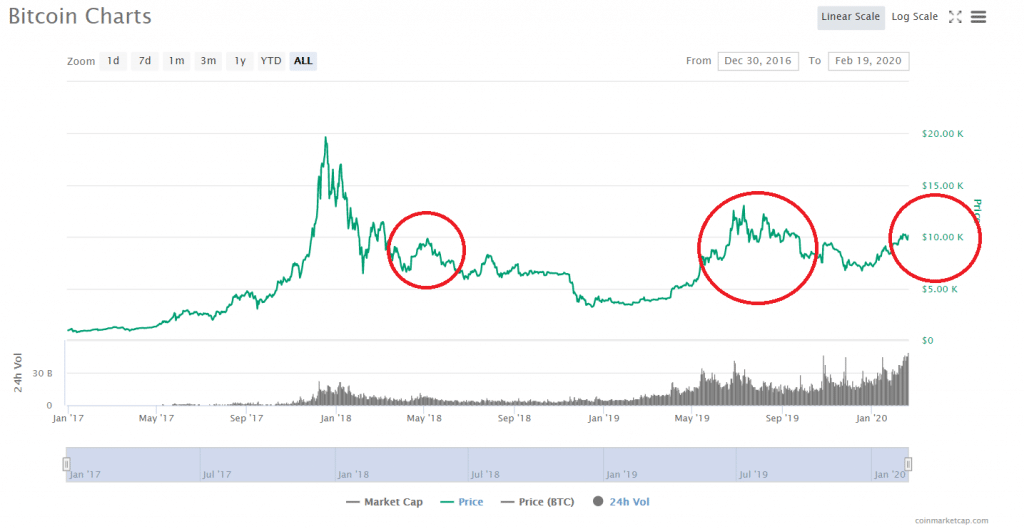 Why does $10k seem to hold such significance for Bitcoin? Is it an arbitrary figure used by the media to create an easy-to-understand narrative of Bitcoin’s progress–or is it something more?

One thing seems to be apparent: the number 10,000 also seems to be an important sticking point in other markets–in an article for Business Insider, CNBC Senior Editor John Carney wrote of “The Curse Of Dow 10,000,” a phenomenon that described the way that from 1999-2003, every time the Dow seemed reached the 10,000 level, it would “succumb to a bear market and fall below it ever time.”

“The pivotal change seems to have come in 2004 when the Dow hovered around 10,000 for the entire year,” Carney wrote. “It was something of a break-through. The following year, the Dow sustained itself above 10,000 and never looked back.”

Indeed, while Carney acknowledged that the idea of “a big round number like that” as an obstacle might seem irrational on the surface, the psychological role of 10,000 could be having tangible effects on the ways that investors interact with an asset: “if the markets have in the past displayed a tendency to pull back at a certain level, rational investors can anticipate this and begin selling at that level.”

In other words, if $10,000 seems to be the place where BTC has stalled out before, then investors may plan to sell once $10,000 is reached in order to avoid a loss. Carney called these investors ‘psychological arbitrageurs’, or ‘Psych Arbs’: these traders “[reinforce] what otherwise might be an irrational market behavior, as the traders try to make money by betting that the market will gyrate when it hits key psychological points.”

This kind of cycle of planning actions based on what one thinks may be the course of action of others was also described by John Cassidy in a 2008 article for The New Yorker entitled “Rational Irrationality”: in the article, Cassidy cites author John Maynard Keynes’ comparison of financial markets to public opinion-based beauty contests.

In The General Theory of Employment, Interest, and Money, Keynes wrote that in these contests, “the competitors have to pick out the six prettiest faces from a hundred photographs, the prize being awarded to the competitor whose choice most nearly corresponds to the average preferences of the competitors as a whole; so that each competitor has to pick, not those faces which he himself finds prettiest, but those which he thinks likeliest to catch the fancy of the other competitors, all of whom are looking at the problem from the same point of view.

In other words, “if you want to win such a contest, you’d better try to select the outcome on which others will converge, whatever your personal opinion might be.”

One of the most recent examples of this kind of phenomenon has been theorized to be the price jump that briefly ensued after tensions between the United States and Iran at the beginning of the year.

Schiff’s point was further validated by the fact that data from Coin.Dance showed little to no movement in Bitcoin being traded in Iranian Rial markets on peer-to-peer cryptocurrency exchange LocalBitcoins.

Around the same time, “Alex,” one of the co-founders at peer-to-peer crypto trading platforms AgoraDesk and LocalMonero, told Finance Magnates that while “some Iranians use crypto,” cryptocurrency is “still relatively obscure and extremely difficult to get in the country.”

Jim Angleton, president, and chief executive of financial consulting and business intelligence provider AEGIS FinServ Corp, pointed to another kind of psychological factor that seems to have manifested in the Bitcoin community around the $10k mark.

“In reality, this is not sound and akin to ‘irrational exuberance,’” Angleton said, citing Allan Greenspan, who used the term in a speech given at the American Enterprise Institute during the dot-com bubble of the 1990s. The phrase has since been interpreted as a warning that the stock market might be overvalued and that a bubble may form–in other words, investors become over-excited and begin to irrationally pump money into an asset.

Angleton sees the $10,000 mark in Bitcoin markets as a trigger point for this ‘irrational exuberance’: “you can see the tone and tenor of investors, miners, retailers when [BTC] is above $10k: they are full of testosterone and beat their chests as if they have won a marathon,” he said.

I took a screenshot a couple hours earlier, wanting to send it. But thought that might be too much shilling, and held off. As it turns out, there isn’t the concept of too much shilling for #btc. Keep slapping! pic.twitter.com/hkxieXIxGX

However, “this is not wise when spending your after-tax dollars on a completely speculative item,” he said, especially because “the moment this value is under $10k you see a mad dash in all 3 Webs [of] people trying to seek information to make a decision to sell or hold.”

Below 10k again… SCAM!!
Waiting for yet another obituary from @PeterSchiff

Joe Vezzani, chief executive of crypto investment research firm LunarCrush, wrote to Finance Magnates that the $10k mark is not so important to investors anymore–rather, it is a convenient point that media narratives tend to latch onto: “the $10,000 market was more of a psychological factor back in 2017,” he told Finance Magnates.

Therefore, Mr. Vezzani believes that “the mark is not psychological to most investors at this point. It does, however, bring more attention to the currency as media portray it to be a psychological level and therefore cover the price at the $10k inflection point.”

Jim Angleton agrees that narrative plays an important role in disseminating the $10k storyline: “when the price drops under $10k, all eyes are on this value, and the gossip mills in social media [as well as] deep and dark web [circles] commence to give speculation or private [buying and selling].”

“Remember, this is not like a stock whereby you have certain formula tools to establish value,” he explained. “No, BTC is more of a [vehicle of] ‘mood trade,’ and speculators risk [trading on] gossip over hardcore facts. “Many will try and dazzle you with their idea of underwriting,” he continued, “but it is really between a motivative buyer and seller who establish price and value.”

Jack Choros, chief marketing officer at CryptoRadar, echoed Mr. Angleton’s sentiments around the role of gossip and narrative in the price of Bitcoin.

In addition to the idea that “round numbers by themselves are always more appealing as a benchmark,” Mr. Choros pointed out that “there’s also the fear of missing out that comes in when the price is rising. When the price is falling, Bitcoin’s doomsday predictors start to make their voices heard and trick people into thinking that it’s over.”

However, as significant as it may be in and of itself, Mr. Angleton sees the $10k mark as a smaller piece of a more complex matrix of price points: “the threshold deck for measurement has really been $7,500 per BTC,” he wrote, “and when it reaches $10k, it is considered to be on fire.”

Therefore, he believes that “the real question is when the price per coin drops under $7,500–and for how long.”

But with the upcoming “halving,” when BTC’s mining rewards will be cut in half, the $7,500 threshold deck may soon be on its way up.

Why is this? Bitcoin’s “floor”–which has been around $3,000 for the last two years, is likely to increase as a result of the halving. “Bitcoin’s price floor is related to the cost of mining,” wrote Charles Phan, chief technical officer of Interdax, in an email to Finance Magnates: “Bitcoin will never stay below its cost of production for too long.”

Jeremy Britton, chief financial officer at Boston Trading Co., explained the effect of the halving to Finance Magnates this way: “at present, it costs around $3000 just in electricity to mine a single bitcoin (notwithstanding the cost of hardware, and internet access),” he said.

When the next halving occurs in May, however, Mr. Britton believes that “the price to mine a single bitcoin will increase to a minimum of $6000. Whatever the new ceiling is, the floor will be $6k, as miners will refuse to sell for a loss.”

The halving, along with a number of factors, has led some analysts to say that Bitcoin’s bull market–even with the testing of the $10k support line–is “the real deal.”

For example, cryptocurrency research firm GlassNode recently found that “the daily net growth of entities [on the Bitcoin network] is consistently positive: In Bitcoin’s history there have been only 21 days so far in which the net entity growth was negative,” a factor that the firm described as “a clear indication of a healthy and consistent adoption of Bitcoin over the past 10 years.”

Additionally, MKM Partners chief market technician JC O’Hara told CNBC that “when you look at bitcoin, we’re starting to see signs that the dormant consolidation from the second half of last year is slowly starting to change in terms of positive bullish momentum here.”

According to O’Hara, “we’re breaking above the $10,000 psychological level, and we’re of the opinion that positive momentum will continue to follow positive momentum. So that’s why we think in the short term we could see $12,000 on bitcoin.”

However, there are still some practical matters that may be holding Bitcoin back from this sort of healthy adoption. “The mood swings of BTC react when huge raids occur by law enforcement,” Jim Angleton said, “and the [entire] scheme is given a black eye due to illegal actives.”

Indeed, while the number of hacks, scams, and other illegal activities associated with Bitcoin and cryptocurrency more generally appears to have shrunk, there is still quite a bit of regulatory uncertainty and distrust in Bitcoin as a store of value.

Do you think that Bitcoin has reached a critical point on the journey to mass adoption? Do you believe that Bitcoin will manage to hold the $10k support? Let us know your thoughts in the comments below.