The story is so common that it’s become a cryptosphere trope: cryptocurrency platforms that started as the pet projects of a few people working out of apartments have become world-class businesses. Now that these businesses are well-established, many of them are choosing to scale and monetize themselves.

Once these companies are established, there are four main ways to go about raising funds. Companies can seek acquisition; they can hold an IPO. They can also choose to tokenize themselves via ICO or another means. Others attempt to raise money from private investors in rounds.

Olga Feldmeier, CEO of Smart Valor, recently pointed out that acquisition seems to be the most popular trend among cryptocurrency exchanges.

“The highlight of this week: yet another crypto exchange purchased for ca. 350m USD – Bitstamp. This follows Poloniex acquisition for 400m USD. Meanwhile Coinbase is off to the stratosphere with 8 billion valuation,” she wrote. “As the first generation of crypto exchanges is celebrating its successes, what will it look like in several years time with second generation of platforms focused on tokenized assets and security tokens[?]”

Coinbase has also acquired a number of smaller companies and exchanges–Earn.com, Cipher Browser, Distributed Systems, and Paradex. Crypto exchange Poloniex was acquired by payments company Circle in February. Earlier this week, Finance Magnates reported that “GoverMedia Plus Canada Corp., a Canadian holding company with a fully owned Russian internet and cryptocurrency subsidiary, is looking to acquire EXMO, one of Europe’s largest cryptocurrency exchanges.”

ANNOUNCING: Bitstamp was acquired by Belgium-based investment company NXMH. Our team, leadership and vision all remain the same. We believe this is the logical next step on our mission to be the most trusted digital currency exchange on the market: https://t.co/UxjNpDeKNR pic.twitter.com/3MUoQtdXFn

The rising trend of acquisition could be the result of simple, sudden opportunity. Of the Bitstamp acquisition, CEO Nejc Kodrič, said that “the sale wasn’t planned. There was no active effort to go around and solicit buyers. The vibrant industry last year sparked potential interest from buyers to make a footprint in the industry. We started to get approached by buyers in the middle of last year.”

Indeed, acquisition is a swift, simple way for a company’s owners to profit while maintaining some control over the company’s operations. Kodrič still holds a 10 percent stake in the company; Damian Merlak, his co-founder, sold all of his 30 percent stake.

Generally speaking, “the benefits of [acqisition] include receiving valuable intellectual property and the talented employees of the acquired company – those are precious resources that can help companies grow quickly. Communities and a new user-base are also precious resources the acquirer gets after the deal,” explained Ruslan Gavrilyuk Co-Founder, President of Kepler Finance. Currently in beta, Kepler Finance is a free global database of active blockchain businesses, funding rounds, teams and tokenized securities.

“In the end,’ he went on, “the three main sources of value from an M&A deal are new technologies and data, people, and end users.”

“But of course, there are certain challenges to the approach,” Gavrilyuk said, particularly when it comes to companies who received most of their funding through an ICO. “It is difficult to make a proper valuation of a company that previously raised capital through an ICO – no decent models exist yet.”

A number of exchanges and other crypto companies have chosen to launch their own crypto tokens. These “native” tokens can be used for a variety of purposes: by offering discounts, users are incentivized to use them above BTC or another currency to pay trading fees, thereby keeping as much cash within the system as possible.

The tokens can also increase liquidity on an exchange. “[If] an exchange can promise you that no matter what, so long as a coin is listed on their exchange, you can trade it for their token, which in turn can be traded for others, then it makes that coin less isolated and less risky reads a report from InvestInBlockchain.

Because of their functionality, many exchange coins have been solid investments. BNB, the native currency of Binance (the largest cryptocurrency exchange in the world by volume), has seen quite a bit of growth since its launch in September of 2017. 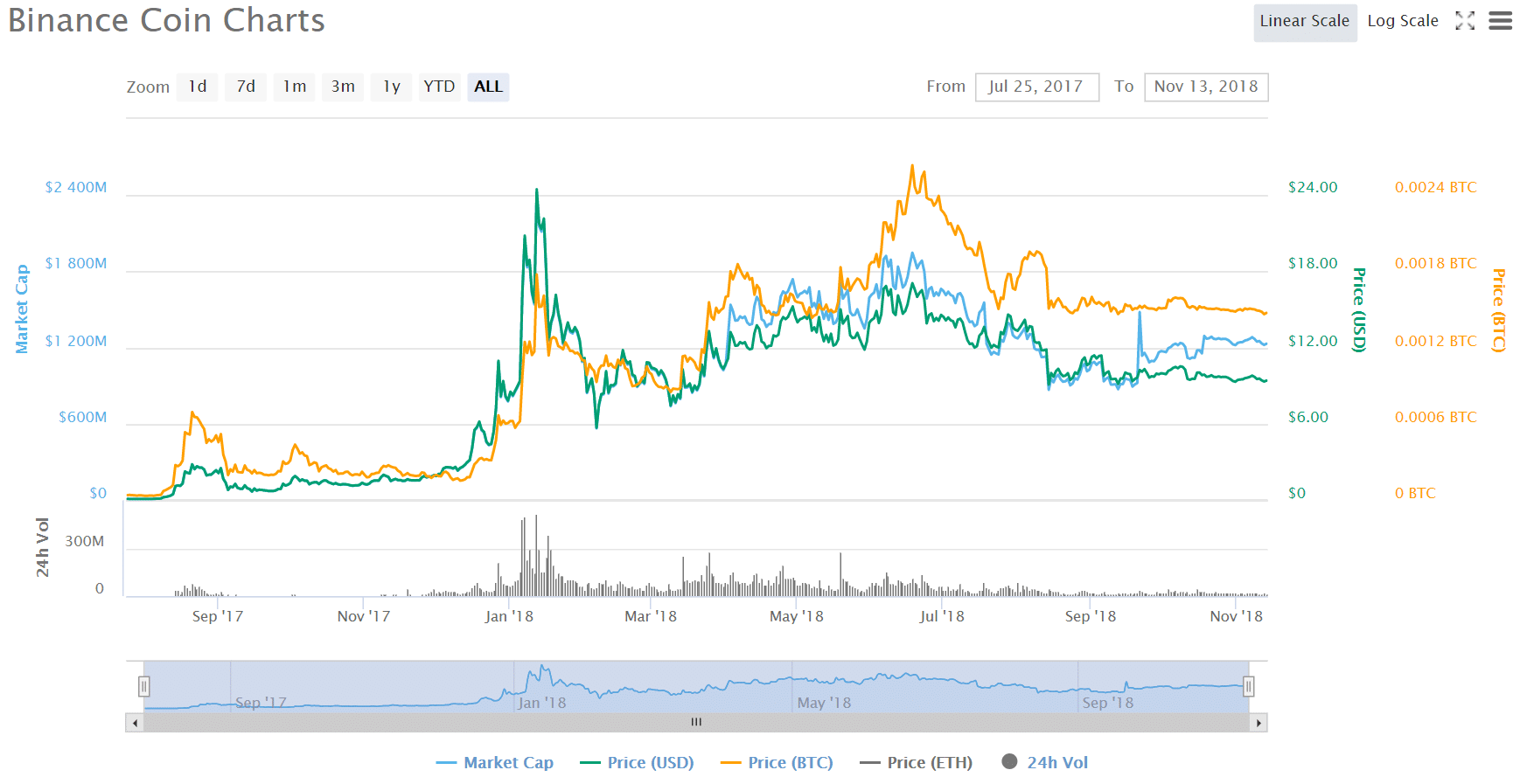 This is especially remarkable in comparison to the decline and stagnancy of the rest of the cryptocurrency markets. However, it is unlikely that these coins will ever find any practical use outside of the exchanges they are native to.

Theoretically, a cryptocurrency exchange or other kind of crypto company could also tokenize itself in such a way that owners of the token would also hold ownership stakes in the company itself. There are a growing number of companies who have used this method as a way to fundraise, including Blockchain Capital, Science Blockchain, and SPiCE VC. There are also an increasing pool of various platforms making this possible, including Neufund. Neufund held its own ICO earlier this year.

However, many regard this practice to be somewhat risky, as regulations for this practice are somewhat unclear. Additionally, the liquid nature of company ownership under this model may require some creative management. Companies holding ICOs must also be willing to accept the legal consequences of doing so.

Generally, though, “as a rule, an investor has no voting rights, doesn’t partake of the company’s profit and doesn’t receive any equity. Instead, he gets tokens that participate in the project economy in a way defined by the token economy,” Gavrilyuk explained. He also pointed out that many investors–including high-volume and institutional investors–may have quite a bit of skepticism when it comes to participating in ICOs, and may want to avoid them.

Gavrilyuk also mentioned that companies should be careful when it comes to ICOs because of the possibility of “disincentivized investors [dumping] tokens just after listing, which will drop the price to the floor.” There have been, unfortunately, many instances of this in the crypto world.

Still, an ICO is generally the fastest and cheapest way to rake in cash without much ownership dilution. “Thus, an ICO may be an answer when the project needs a community of early adopters spread worldwide and the founders are ready to deal with the risks of the emerging industry, which is mainly speculative in its current state,” Gavrilyuk concluded.

Holding an IPO is Becoming More Common Among Crypto Companies

Another option for fundraising–although much less common in the cryptosphere–is holding an IPO. This has been successfully pulled off in the past. Data from Kepler.Finance shows that Argo Mining became “the first crypto firm to raise £25 million (about $32.5 million) through an IPO on the London Stock Exchange (LSE)” on August 6th of 2018”; Blockchain Tech Ltd. was listed on the VentureBoard of the Toronto Stock Exchange on November 5th.

A few more examples are scattered here and there, but the most significant examples may be yet to come. “Two notable companies that are planning to perform IPOs are Coinbase and Bitmain – both crypto giants – one being a regulated crypto-exchange and the other the operator of the largest Bitcoin mining pool and producer of its own specialized mining devices called ASICs,” Gavrilyuk explained.

While an IPO may allow companies to reach a large swathe of investors and increase brand awareness, “the main disadvantage is the time and expense of going through such a process – usually it takes 6-9 months or longer, and the costs are pretty high. Moreover, when the company goes public, it must maintain transparency in its internal processes and satisfy the needs of its shareholders.”

Private sales are growing in popularity as regulatory forces crack down around the world. TaTaTu, Nexo, Nucleus Vision, and Theta are just a few examples of companies who raked in millions from the sales they had last year; Coinbase valued itself at $8 billion after its most recent private fundraising round.

“This approach gives companies the opportunity to have support from investors who will share their non-monetary resources, first of all, their network and any related experience, as they have interest in the success of the project,” Gavrilyuk explained.

“On the other hand, the company is forced to give up ownership of part of the company to investors through the pre-defined share in equity. Companies have to pay attention to their cap tables – it should be organized in a way that there is no concentration of excess power in undesired hands.”

Some platforms have pursued a sort of hybrid method–holding an ICO or another token sale that is only open to private investors. Reinhard Fellman, a PhD researcher at the London School of Economics, pointed out to Finance Magnates that one of the most successful examples of this is Telegram.

“During the first round of private sale, the company secured $850 million from a global base of investors. The second tranche of $850 million was one of quickest fundraising events in the recent tech history,” he explained.

While holding token sales may cause a large influx of capital in a short amount of time without the legal concerns of holding a public ICO, Fellman said that “the main disadvantage of a private sale is the centralization of tokens.”

“A small number of parties end up holding a large number of tokens, and if the project is based on a utility token
use case, this can be problematic for true application of the platform due to price speculations.”

In any case, when it comes to monetization, companies are faced with a lot of options–truly, a good problem to have.