Well, folks, ol’ Craig Wright is at it again–another storm has been brewing in the cryptosphere, and the self-proclaimed creator of Bitcoin is at the center of it. If you thought that things got ugly last time, well, you ain’t seen nothin’ yet.

And so far, the consequences of Wright’s vengeful actions have been severe. Over the past week, at least three well-known cryptocurrency exchanges–Binance, Kraken, and Shapeshift–have made the decision to delist Bitcoin Cash Satoshi’s Vision (BSV, the cryptocurrency that Wright is responsible for creating) from their platforms following some rather outlandish behavior. 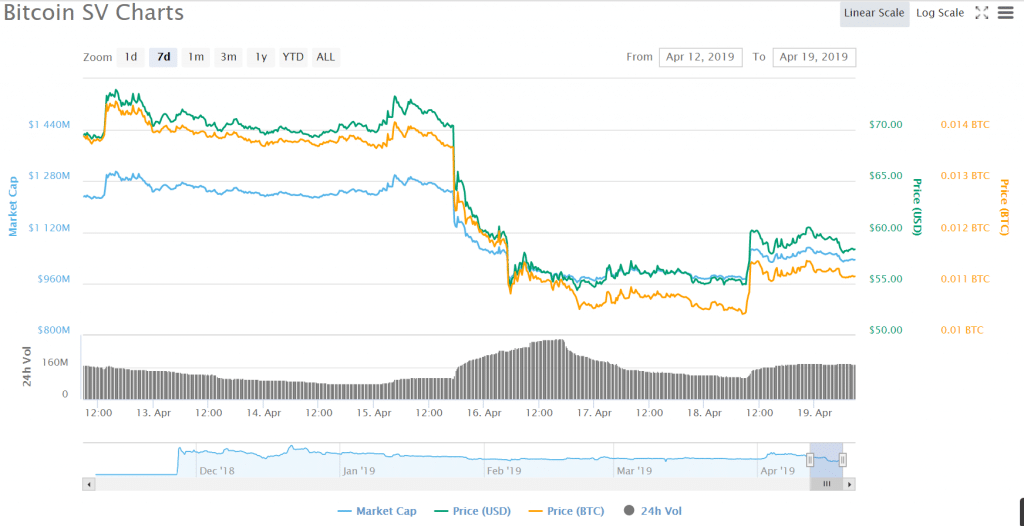 As a result of the de-listings and the controversy surrounding them, the price of Bitcoin SV crashed from a high this week of roughly $73.50 to as low as $54.24 before rebounding to roughly $60. At the same time, Bitcoin Cash, the coin that BSV was forked from, has seen a major boost.

Wright Went On a Legal Rampage Against Those Who Claim He Isn’t Satoshi Nakamoto, the Creator of Bitcoin

Indeed, things have gotten rather personal between Wright and some of his critics. It seems that Wright is fed up with being accused of lying about being the “real” Satoshi Nakamoto. As such, Wright started down a legal warpath.

The first move came on March 29th, when Wright’s attorneys served legal papers to the individual behind a Twitter account with the handle @Hodlnaut. The papers threatened legal action against the user for holding what was referred to as a “targeted campaign” of “highly defamatory and abusive tweets.” Wright also set a $5000 reward for whoever could provide the real identity of @Hodlnaut.

Wife: Wat r u doin on ur phone?

Me: This guy Craig said he was satoshi but he’s not and he tried to sue this space cat and then we all became space cats and then this English dude got sued and this Chinese guy delisted Craig’s shitcoin.

Me: this is important

Wright has issued warnings to several high-profile members of the cryptocurrency space, including Ethereum creator Vitalik Buterin and podcaster Peter McCormack, of his intent to sue them for defamation and libel. Both men apparently stated that he wasn’t the real Satoshi Nakamoto.

Protecting his claim that he is indeed Satoshi Nakamoto seems to be at the root of it all. “[Wright] has not fraudulently claimed to be Satoshi Nakamoto. He is Satoshi Nakamoto,” wrote his attorney in the papers served to @Hodlnaut. “He produced the report Bitcoin: A Peer-to-Peer Electronic Cash System in October 2008, sent the first Bitcoin to Hal Finney in January 2009 and played an integral part in the development of Bitcoin. He has explained his role in detail on previous occasions.”

So far, the three individuals that have been threatened with lawsuits don’t seem to share Wright’s fervor for a fight. According to a Bloomberg report, Buterin hasn’t responded to the letter sent to him by Wright’s lawyers; McCormack tweeted that 15 lawyers have offered to take his case pro-bono. Hodlnaut’s account has reappeared after briefly going offline, filled with retweets supporting his own case and Peter McCormack’s.

My formal response to the letter issued by the lawyers of Craig Wright and @CalvinAyre. This was sent today. We look forward to resolving this quickly and efficiently. pic.twitter.com/ANSmF1kH8k

But Wright is serious about his pursuit of legal action, at least against Buterin and McCormack. “I am mainly seeking people who have a perceived authority within the cryptocurrency industry so Vitalik & Peter McCormack,” he wrote in an email to Bloomberg. “They have been sent the opening letter outlining the case already. This will give me the chance to prove my credentials in front of a judge rather than being judged by Twitter.”

Wright apparently sees Buterin’s and McCormack’s criticism as “a desire to silence me.”

“They see an end to the scams, the pumps and lies in a single system and honest protocol and they are afraid. To my mind a simple denial of the basic principles of Bitcoin. Anybody who reads the White Paper can see quite clearly that BSV is the only coin that reflects that paper and has proved it’s the only coin that can scale right now.”

Wright’s decision to go after “high-profile figures” in the cryptocurrency industry could be seen as a sort of equivalent to a small-time rapper picking a battle with a multinational superstar–a bit like Machine Gun Kelly trying to start a diss war with Eminem.

You’ve probably heard of Eminem, but if you’ve heard of Machine Gun Kelly, it’s probably only because his attempt to get under Eminem’s skin worked, at least for a while. Similarly, not very many people may know Craig Wright, but plenty of folks know about Ethereum’s unicorn-llama-clad creator.

However, Wright’s grabs for attention quickly backfired. His vengeful actions against his critics quickly caught media attention, and as such, the attention of other high-profile figures within the cryptocurrency industry.

“Craig Wright is not Satoshi. Anymore of this sh!t, we delist,” tweeted Binance CEO Changpeng Zhao on Friday. By Monday, the coin was cut from the exchange.

Erik Voorhees, CEO of cryptocurrency exchange Shapeshift, also announced on Monday that his platform would be removing BSV.

We stand with @binance and CZ’s sentiments. We’ve decided to delist Bitcoin SV #BSV from @ShapeShift_io within 48 hrs.

Then, two days later, US-based cryptocurrency exchange Kraken announced that it would be following suit.

“When we first listed Bitcoin SV we warned clients in a blog post that it did not meet our usual listing requirements,” read an email that the exchange sent to its users: “Among many red flags, we noted the threatening and openly hostile behavior of Bitcoin SV representatives. We hoped the situation with Bitcoin SV would improve over time but unfortunately it has not.”

The people have spoken. Kraken is delisting BitcoinSV: https://t.co/8lSUfEYUYr#delistBSV

Meanwhile, in the Twittersphere, a number of users have changed their profile pictures to @Hodlnaut used as his avatar. The exchanges who have delisted BSV have been praised.

”Is no one alarmed that one CEO at one exchange can effectively tank a cryptocurrency because he’s got beef with some other dude?”

Wright’s behavior has been so offensive to these exchange executives that they felt like a line had to be drawn, somehow. But is delisting the cryptocurrency that Wright helped to create really the best way? While many may be pleased to see an individual that they consider to be something of a bully being ‘punished,’ some believe the delistings may have also been too rash.

“For an industry built on the promise of immunity from government interference, crypto takes great pleasure when one of its own gets interfered with,” wrote Jeff Koyen, publisher of ICORanker.com. “Sure, it’s not a government agency that slapped Craig Wright down to size by choking his pet project with plunging red bars. But is no one alarmed that one CEO at one exchange can effectively tank a cryptocurrency because he’s got beef with some other dude?”

And sure, “Craig Wright is many things. A blowhard. A profiteer. Arguably, a fraud. For years, he’s been mostly tolerated. Everyone knows that BSV is just another bitcoin fork built to make money. Shrewdly, they draped it with idealistic pro-Satoshi rhetoric.”

“But crypto just wants to make money, and people made money on BSV. It’s only when Wright started tossing around lawsuits that crypto got pissed and mobilized.”

“That’s what I find interesting in this whole drama,” he continued. “Getting lawyers involved was crossing the line. Lawsuits are tools of the establishment, not crypto libertarians. But allowing one powerful exchange to punish and reward through market manipulation? Thundering applause.”

“I suppose one could argue it’s free-market libertarianism at its finest. Even if it does reek of centralized authority and power.”

Who Has to Pay for This?

The question is, then, what exactly were these exchange owners attempting to do by delisting? Seventy-one percent of respondents to a Kraken Twitter poll asking whether or not BSV should be delisted said that the asset was ‘toxic,’ but it’s unclear what that really means. After all, Wright’s ego may take a hit, but the people who will most likely be affected by the consequences of delistings are the users of BSV.

“The move by Binance, Kraken and some other exchanges to suddenly delist Bitcoin SV is driven by personal dislike of Craig Wright,” wrote Jimmy Nguyen, chairman of nChain, in an email to Finance Magnates. Wright is the Chief Scientist and founder of nChain. “They have never particularly liked Craig Wright or BSV, and it appears they are using as a delisting excuse the recent steps Craig has taken to pursue personal legal rights against people he believes are defaming him.”

But Nguyen insists that “there is nothing amiss with the BSV network; in fact, it is stronger now than when Binance, Kraken and many exchanges listed it after last November’s hard fork of the BCH network.”

Q: Do you think that you guys might actually be better off without Craig Wright?
A: @JimmyWinMedia
Watch Full Interview: https://t.co/5a6T0zC6Hv pic.twitter.com/izT3v0fPhZ

“More mining pools have joined the BSV network; more wallets, applications and services support BSV; daily average block size has increased due to lifting the OPReturn data limits and creative new uses made by developers of that increased data capacity… There is staggering hypocrisy because Binance and Kraken continue to list assets which are objectively far weaker and less valuable than BSV.”

Nguyen also pointed out the potentially problematic nature of the decisions to delist. “The delisting decisions smack of market manipulation and I predict the exchanges will face serious legal questions about their conduct,” he said. Indeed, ardent BSV supporter and colorful cryptosphere character Calvin Ayre has hinted that some companies with large investments in BSV may take legal action against the exchanges.

“It sets a terrible precedent for the cryptocurrency industry for an exchange to use its CEO’s personal dislike of a coin’s individual supporter as a basis to make delisting decisions,” Nguyen continued. “What if one day Vitalik Buterin or Charlie Lee took personal actions that offended an exchange CEO? Should that be the basis for delisting Ethereum or Litecoin?”

“Obviously not, and cryptocurrency enthusiasts should not be cheering a precedent which can make all cryptocurrencies vulnerable to easy market manipulation and heavily influenced by just a few people at notable exchanges. Whether you agree with Craig Wright’s personal legal actions or not, those issues are for a court of law to decide – not crypto exchanges.”

Meanwhile, things have continued to get even weirder on Twitter. As the movement against Craig Wright and BSV is continuing to grow, John McAfee has thrown his own hat into the ring, claiming that he knows the real identity of Satoshi Nakamoto. And if Nakamoto doesn’t reveal his own identity, well–McAfee is going to do it for him.

Regardless of whether McAfee actually does know the identity of Bitcoin’s creator, Changpeng Zhao has some choice words for anyone who believes that Wright may be telling the truth:

Lastly, anyone who supports BSV from a tech perspective should be attacking the fraudulent Craig Wright, who is poisoning YOUR community, and not attack the rest of the world.

Anyone thinking CW is Satoshi should read about how a private key works, ie, learn about crypto.