Popular US crypto exchange Coinbase has just enabled full support for trading the 0x Protocol token (ZRX), which is now available for retail investors through the company’s Android and iOS apps. The move comes barely a week after Coinbase has added the first ERC-20 token to the exchange’s professional trading platform, Coinbase Pro (formerly GDAX).

With the addition of 0x (pronounced “zero x”), Coinbase now boasts six cryptocurrencies on its trading catalog. ZRX will also be available for trading with the other five virtual currencies — Bitcoin, Bitcoin Cash, Ethereum, Ethereum Classic, and Litecoin.

The company has had a string of recent announcements in a major push to attract crypto traders and grow its user base. The news came amid long-standing speculation that Coinbase, which is the most popular trading service the U.S., would add new assets.

While announcing the news, Coinbase also noted the platform’s commitment to complying with the standards set by the New York State Department of Financial Services (NYSDFS), saying: “ZRX will be available for customers in most jurisdictions, but will not initially be available for residents of the United Kingdom or the state of New York.”

ZRX Would Happen Slowly and in Stages

While other exchanges offer a wider selection of cryptocurrencies to trade, Coinbase has elected to proceed cautiously while regulators evaluate the legal status of the new currencies.

At the time of writing this article, the announcement was only a few hours old — but there was already a strong increase in 0x [ZRX] price following Coinbase news. The token saw a massive spike from $0.676 to trade currently around $0.93, up nearly 25 percent during the day. Still, ZRX  is down more than 50 percent off the peak it hit earlier in May at $1.93 and is currently ranked 22nd based on market capitalization. 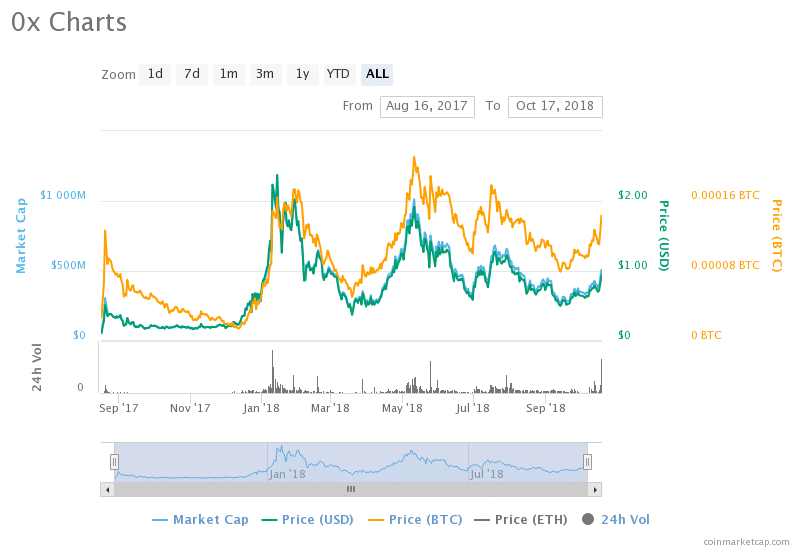 The latest addition comes as no surprise as the popular San Francisco exchange crafted a new asset listing policy earlier this year after getting itself into hot water when its added Bitcoin Cash to its platform. Coinbase said it took measures to ensure insiders did not have an early opportunity to trade on the news.