For GMO Click’s Ladder Options, the legal type of options available in Japan, the total transaction amount, as a percentage of the total client payment amount reached 95.16% in April 2015. This figure is not surprising as people only deposit funds in order to trade and therefore remains constantly over 95% as the months go by.

A more relevant figure released by GMO Click is the transaction proportion of loss occurrence, meaning the number of accounts whose total monthly income has become negative. This data point shows that 80.31％ of binary options accounts lost money in April 2015.

The figures from the Japanese online trading giant reveal interesting data not available in other regions of the world about binary options success levels. As we can see from the chart, for the last twelve month traders consistently lost above 70% of their money. While this does not guarantee that the broker profited every month, as it is possible that the +20% of profitable traders made more money than the -80% who lost, it is a reliable indicator of that.

As of today, there has been only one month when more binary options trading accounts finished with a positive outcome over a negative outcome. That was in March 2011, when GMO Click launched the service, with 48.12% of accounts losing money. 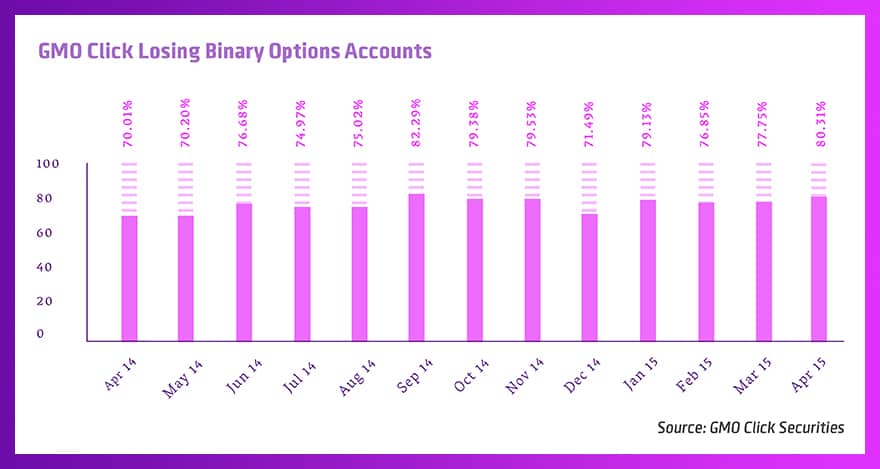 GMO CLICK’s forex trading volumes reached in April 2015 was ¥111.49 trillion. This is the lowest FX volume for GMO CLICK in the last six months and well below January’s high mark.