The latest official data on the Japanese binary options market published today by the Financial Futures Association of Japan (FFAJ) hints that the long-awaited return to growth in trading volumes and number of accounts might have started.

The figures show a slight improvement in May 2015 in an otherwise stagnating market for the industry in the giant Asian economy. The performance in future months will determine if this is the moment when binary options in Japan have finally turned the corner or just false hope.

May trading volumes reached over ¥42 billion ($340.6 million) in total for the eight companies currently operating on the Japanese binary options market. The figure is 1% higher when compared to the month of April 2015. The number of existing accounts grew to 316,562 in May, a 0.9% increase compared to the previous month but it did not contribute to a higher number of active accounts.

A yearly comparison of the Japanese binary options trading volume shows much more clearly how dire the situation is but also the great room for growth. The May 2015’s ¥42 billion figure is down 39% compared with May 2014’s figure of ¥68.7 billion, which in itself was a major disappointment after dropping from ¥117.5 billion in April 2014. The number of existing accounts stand at 16.6% compared to May 2014 which means that the average trading volume per client has crashed compared to the same figure last year.

For more information about participating in our Tokyo Summit or exhibiting and sponsorship opportunities please email summit@financemagnates.com 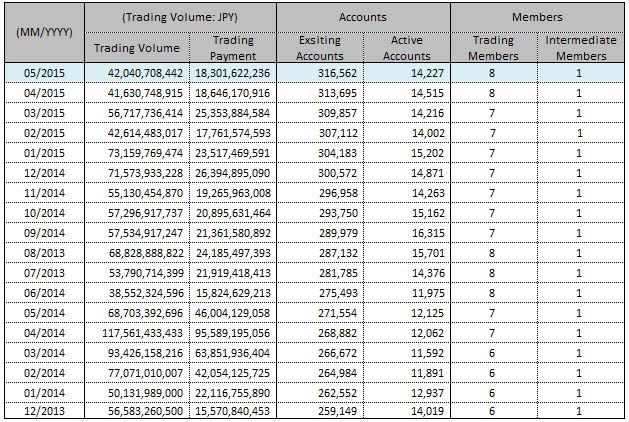 Share this article
Tags: Japan
Got a news tip? Let Us Know