Traders are not as committed to the bearish side as during yesterday’s ECB meeting, and as a result of this, the FTSE 100 has regained some of its losses.

On the other hand, a break to yesterday’s low of 6011 and continuing trend would appear to have turned distinctly bearish and may be seen as a dissatisfaction of the ECB’s looser monetary policy. In this scenario, the next support level in line and target for bearish traders could be the February 24 low of 5839, with a break to his level potentially opening up the door for a decline to the current yearly low of 5495.

Do we have a potential bellwether?

Ahead of the ECB meeting, market chatter did point out that both negative interest rates and low long-term yields remained factors in hurting the profitability of banks.

Market reaction in shares of some of the biggest banks in Europe (HSBC Plc., BNP Paribas, Credit Agricole Group, and Deutsche Bank) are so far positive, with the exception of HSBC Plc. Further gains in the shares of these banks could act as some sort of bellwether for stocks as well as highlighting market persuasion on the ECB’s latest move. 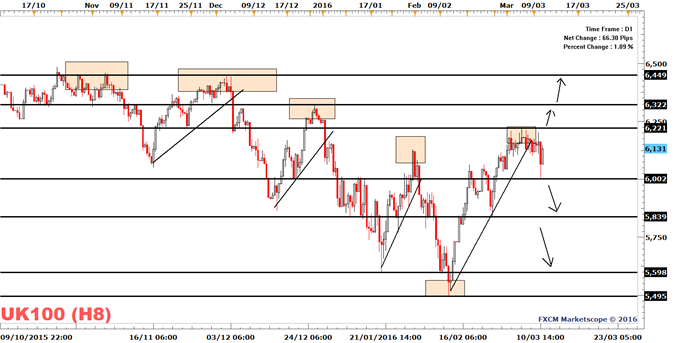