The drag on the index over the last 12 months has been from the Oil & Gas, Basic Materials and Financial Sectors with the total median share-return in these sectors over the same period lying at -10.28%, -22.15%, and -10.01% respectively.

The total return for the median share in the Basic Materials sector lies at +14.68%, while Oil & Gas is higher over the last four weeks by +11.49%.

The Bearish Momentum Has Slowed

The stabilization in commodities appears also to have stabilized the FTSE 100 and dented the overall bearish momentum.

Price is now trading above its downward slopping trend-line originating from the 2015 high. However, this is not enough to end the downtrend and a break to the December 28 high of 6324 may be needed before any bearish momentum dissipates.

At this stage the bearish trend is very much present and the FTSE 100 may reach the psychological level of 5750 followed by the current yearly low of 5494.50. For this scenario to form a short-term bullish trend we may need to see some reversal in the current setup. The current trend-defining level is the ECB rate meeting low of 6002. Failure to break this low may generate further gains over the coming days ahead. 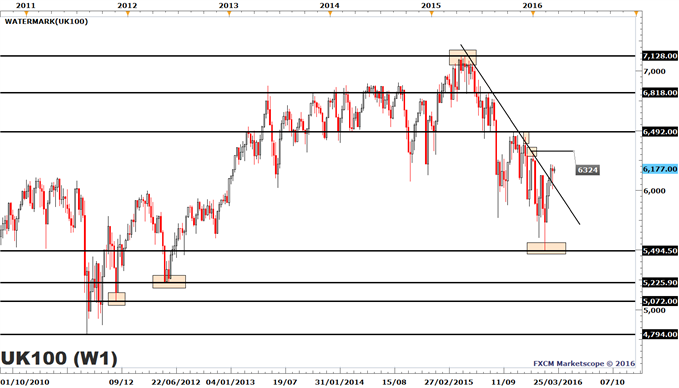