Gram, a cryptocurrency developed by Vkontakte social network and Telegram messenger, was the most widely-discussed project in 2018 in both the digital money sphere and globally. It has been a long time since investors, traders, miners, and crypto enthusiasts showed such a keen interest.

Telegram’s cryptocurrency remained under the spotlight throughout the year. The news about a launch of the Telegram Open Network (TON) is highly anticipated by millions of users around the globe. The cryptocurrency is topic number one on numerous forums.

Moreover, a question “where to buy Gram” has lately been the most frequent request in search engines. Introduction of the Gram coin was announced in December last year.

The fact that Telegram has firm intentions to create its own cryptocurrency was proved by extracts from the original Whitepaper and a communique about the upcoming presentation of Gram coin. Remarkably, Gram’s logo will be a stylish image of a diamond.

According to preliminary estimates, Gram can raise as much as 3-5 billion dollars. Telegram is a widely-used and fast-developing messenger that has considerable advantages over its counterparts:

– secret chats with a self-destruction option

The new crypto platform will be launched by Telegram. No banks or government bodies will be involved. Allegedly, plans to create Gram are connected with the need to monetize the messenger and gain independence from major advertisers, governments, funds, etc.

With the help of own-developed cryptocurrency, Telegram hopes to broaden its opportunities and enhance security.

Telegram Open Network (TON) is a common name for the new platform that ensures faster and more powerful blockchain process of all existing. It has already been called a third-generation platform.

The new token will be issued in the amount of approximately 5 billion, 200 million of which will be registered under the names of Telegram’s participants.

Overall, the company plans to keep 2.6 billion coins, or 52% of the total amount, thus protecting the crypto currency from speculations. At the same time, 2.2 billion tokens are intended for public sales. The tokens are planned to be sold for fiat money only, preferably for dollars and euros.

The blockchain of the new cryptocurrency will operate on base of the Proof-of-stake (PoS) technology. This technology implies that a possibility of creation of a new block by a participant is proportional to the share that consists of the cryptocurrency units owned by this participant. One of the BFT protocol types will be used to improve performance.

At the same time, introduction of special 2D arrays will make the blockchain more independent and enable it to get rid of bugs internally. Thus, it is going to be the most powerful and trustworthy blockchain of all previously existing.

TON’s developers claim that the network will solve one of the most urgent problems of cryptocurrencies – the low speed of transactions. The TON blockchain will be capable of processing millions of transactions per second.

To compare, Bitcoin’s capacity is 7 while Ethereum’s is 25 transactions per second. After publication of a roadmap, developers plan to raise 3-5 billion dollars, and it is already known where 80% of this amount will go.

The received money will be spent on development of equipment that will facilitate the work of the cryptocurrency; verification of users in order to enhance security; and attraction of new specialists who will ensure stable and flawless operation of the network.

According to the TON roadmap, the economic base for the network will start to be formed in the first quarter of 2019. Besides, all corresponding services, storages and proxy servers will be activated.

Pavel Durov’s team carried out the Initial Coin Offering (ICO) of the Gram tokens on the TON blockchain platform. Similar to an IPO, investors who participate in an ICO get certain benefits in return for their investments.

For example, an investor is entitled to share the future profits. Remarkably, the Gram ICO was private. The minimum investment limit was $20 million. Moreover, investors were approved manually, so some millionaires were bereft of the unique opportunity to put their money in Durov’s coins.

As a result of two ICO rounds, Telegram’s founder received $1.7 billion from 175 investors. The company shall be obliged to return this sum to investors unless it launches the blockchain platform until October 31, 2019. The information about investors was not disclosed but some of them announced their participation in the Gram ICO.

Reportedly, the project’s wallet will be presented along with the token. However, a launch of the new blockchain platform has been postponed. Initially, a test version of TON was scheduled for release in late 2018.

A launch of the Telegram Wallet was planned on the same date. The wallet is intended for storing not only Gram coins, but also other cryptocurrencies and fiat money. Potential users of the wallet are required to prove their identity at first. One of the verification methods is passport scanning.

The personal data will be encoded with the help of private keys that can be accessed by authorized users only. The Telegram Wallet will enable its users to transfer money much faster than via MasterCard or Visa. The size of a commission per transaction has not been unveiled yet.

One of the most burning questions is when Gram will see the light. The developers promised to set up a test version of TON at the end of January 2019, but they did not manage to meet the deadline due to innovative nature of the project.

The team spent too much time, creating additional algorithms for the TON blockchain. The next date of the Gram release is scheduled on late March 2019. Allegedly, Pavel Durov planned to launch the project in December last year, but he postponed it to January and then to March.

In fact, the things are not going smooth. Developers face unexpected challenges in the process of implementation. Reportedly, the core of the TON blockchain is 95% ready. Investors will see the test version at the end of February, and outsider developers will get access to the test network in early March.

All users of the messenger will get access to the active version of the blockchain at the end of March approximately. More detailed information about when Durov will launch his project and when Gram will be available for buying will be unveiled soon.

Unfortunately, no official data about the cost of Gram has been discovered yet. The ICO was private, so few people could participate in it.

That is why the information about Gram price is not publicly available, investors can only guess. Still, there are some insiders’ leaks that cannot be trusted as they contradict one another. Allegedly, the token’s price varied from $0.36 to $1.33 during the ICO.

At the same time, investors were required to pay for carrying out transactions.  As soon as the ICO started, analysts provided their forecasts of the present and future cost of the coin.

Experts’ views are mixed: some of them predict that Gram is doomed to failure and its price will crash straight away; others expect the new cryptocurrency to skyrocket to thousands of dollars in the nearest future.

The most plausible forecast is that Gram will appreciate to $10-$15 in the first several days after its appearance. Its distant future is vague. There are too many unknown facts such as the initial amount of the coins, the marketplaces where Gram will be traded, and the services that will work from the start and consequently.

Thus, these facts will contribute to price formation of the new cryptocurrency. 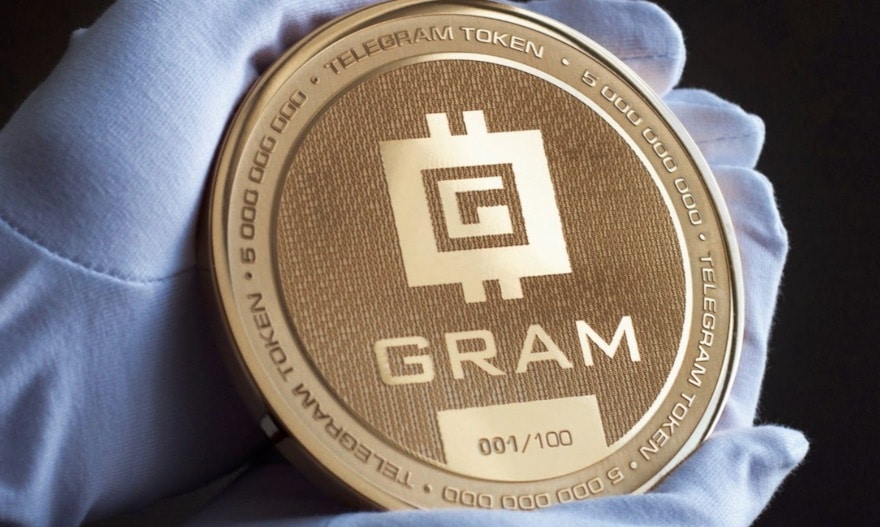 Interestingly, the new cryptocurrency can be exchanged for fiat money only. Currently, there is a definite plan for introduction of the exchange rate of Gram against the Russian ruble and the US dollar.

Experts anticipate that the yen, the yuan, and the euro will also become available for exchanging for Grams. The Telegram community is rather big and comprises users from all over the world. The coin price will depend on the amount of the initial issuance.

Reportedly, about 5 billion of coins are planned to be issued, 2 billion of which will be offered publicly. The rest of the coins will be stored in a special fund until the market stabilizes. After that, they will also be released in public trading. Experts’ outlooks for the Gram price vary.

Most analysts predict that the price will range from $1.5 per 1 TON to $5-6 per coin during public sales. In the best-case scenario, the price can reach as high as $10 per coin. The exact price is inconceivable, but most experts agree that Gram can make the top 3 of the cryptocurrency rating in terms of capitalization in a few months.

Well, this forecast spices up anticipation of the new digital coin. If TON developers manage to implement all the plans described in the Whitepaper, then it will be a real breakthrough. The list of the platform’s services is promising, so it is going to be a large-scale project.

The TON services include the Telegram messenger that is expected to be monetized even more in the future and the Telegram Passport system for user verification that ensures safety of personal data.

Besides, developers plan to introduce the TON blockchain that will provide fast and cheap transactions and support smart-contracts and additional side-chains for separate tasks.

Furthermore, the Telegram Open Network will include a payment system based on the TON blockchain, a proxy server similar to Tor, decentralized storage that will operate like torrents, a comprehensive functions set for creation of applications and website inside the TON – from games and social networks to video hosting sites similar to YouTube.

Pavel Durov has already proved that he can implement the most daring and ambitious tasks. As a genius entrepreneur and PR-manager, he is always one step ahead, and his programmers possess extraordinary encoding skills.

The vast audience of 200 million Telegram users is also a big plus for a successful start. So, everything is set for the Gram’s groundbreaking launch.

Durov has all the necessary financial, HR, and public relations resources for the successful implementation of the new project. What is more important, he has trust and confidence of millions of users around the globe who can generate demand for the new crypto coin.