The dollar index, DXY, had a great start to the new decade, as the currency turned higher from December 31, 2019, and never looked back until February 20. At one point the USD was up by 3.67%, and against the Euro, the dollar reached new multi-year highs.

However, since the onset of the second leg of the Coronavirus crisis, which has seen cases increase swiftly in places like Italy, the USD has been softening.

The slide in the USD and gain in the dollar has come to a surprise to many traders as the coronavirus crisis is threatening to shut down the European economy primarily.

Europe might have excellent health care for all of its citizens; however, they lack the will to close their borders to contain the spread. If they eventually close the borders, it will inevitably cause the already week European economy into recession. 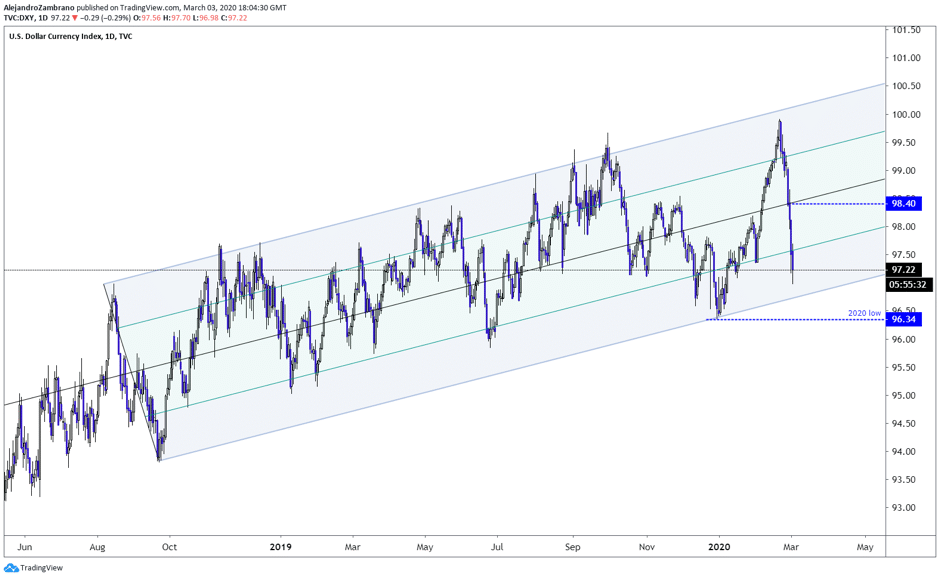 Despite the economic risks being in Europe, the USD has weakened, and the Euro has strengthened. I think the reason for this is that investors have been borrowing cheaply in Europe, where interest rates are low, to fund investments elsewhere.

However, when there is a risk of the global economy turning into a recession, the yield advantage the USD is offering not enough to compensate for the volatility in asset prices, which causes Euro borrowers to hedge their bets. Causing the EURUSD to trade higher.

At the same time, the Federal Reserve, on March 3, delivered a surprise 50 basis points rate cuts, this was a complete surprise for the markets as it was outside of their regular meeting dates.

They cut to smooth out the risk of the Coronavirus, and the impact of China shutting down from the Chinese New Year. However, despite the outsized rate cut, we did not see the dollar take out the long-term channel seen in the DXY index below.

Since 2018, the Dollar index, DXY, has been trading slowly higher and the channel seen below has been good at pointing out important levels in the index.

As the Federal Reserve cut its interest rates the USD tried to reach the lower upward-pointing trendline, but the dollar was not able to break it.

A retest of the trend line might happen in the next few days, but the large interest rate cut by the Federal reserve, probably means that they will not change rate in the next two months, so speculators will have problems pricing in interest rate cuts in the USD in the very near term.

On the other hand, the pressure is now on the ECB to support its economy, and they might cut or add to their QE.

Technically, the trend in the USD will remain upwards as long as the price traded above the 2020 low of 96.34, and the USD might revisit the median line of the channel, currently at 98.40.