MicroMoney represents one of the market’s first ever blockchain credit bureaus that follows the rules of transparent social and green microfinance businesses, with the aim to fight financial exclusion across emerging markets. This continual goal has served as the impetus for joining the United Nations Sustainable Development Goals (SDGs) global program, installed back in 2015 by upwards of 193 world nations.

According to the SDGs program’s global objectives, our company will keep its work to provide a multi-purpose digital identity and opportunities to build creditworthiness and reputation for the unbanked people around the globe. We also help micro, small and medium-sized enterprises (SMEs) that don’t have the access to the world’s financial services. Of note, nearly 60 percent of our SME borrowers are women.

What is the problem we are trying to solve? More than 2 billion people worldwide are recognized to be unbanked. That means that these individuals are forced to use only cash in their daily life and have no chance to solve their urgent problems by applying for banking services. 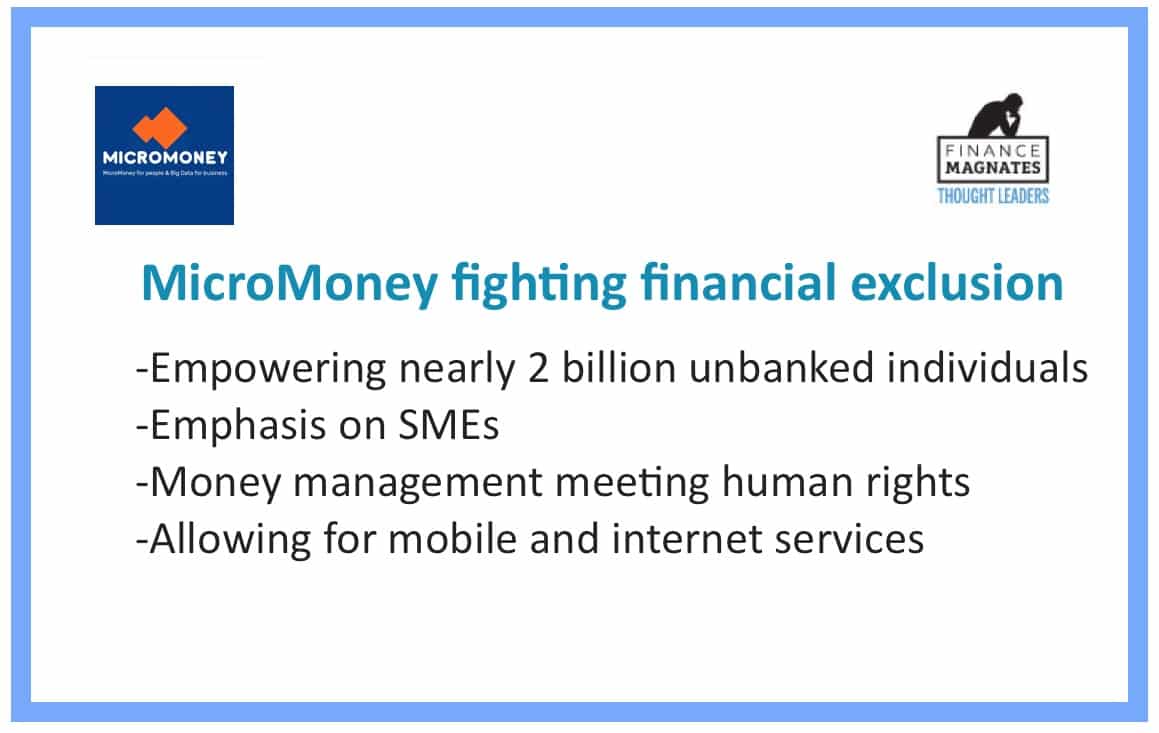 Borrowing from friends and family is the most common source of credit because their loan applications are unlikely to be approved by banks. And of course, such people are often caught by loan sharks. The reason these people stay unbanked is typically recurrent: they have no credit histories.

For its part, MicroMoney sees financial services availability as a requisite human right – its aim is to provide banks with the tools that allow them to give an access to high-quality, fast and affordable services for the world’s financially excluded. The problem of financial exclusion can be solved by mobile and internet availability, along with financial inclusion tools such as creating a credit rating from scratch.

Artificial Intelligence (AI), machine learning, mobile scoring, and blockchain are also leaned on to keep all users’ data secure. Furthermore, big data technologies will also aim to help the unbanked receive this access and will make their data available with a customer’s consent for financial businesses to organize processes cheaper and more efficient.

Moreover, MicroMoney is a part of the Africa Blockchain Alliance project. We support their intention to educate and network stakeholders in order to promote the development of the blockchain ecosystem in Africa. We already have advisors and partners from Africa, who have helped us to get to know the region better. In the upcoming months, we are going to enter the Nigerian market with our social lending services and a blockchain credit bureau.

One of MicroMoney’s goals is to raise the level of financial literacy worldwide, so we are happy to take part the Africa Blockchain Alliance, which shares our goals and brings blockchain stakeholders regularly together in various African cities to build the largest community of blockchain enthusiasts on the continent.

The crypto economy might be a key to more safe and fair world. So we will be applying to become a member of the Blockchain for Social Impact Coalition (BSIC). This community focuses on inspiring and creating bridges between non-government organizations, government agencies, foundations, impact investors, philanthropists, and technologists.

The Blockchain for Social Impact Coalition represents an initiative of ConsenSys, a venture production studio, aiming to fight against financial exclusion, energy and environment damage and other world’s problems. We would be happy to become part of this union because we believe that if shift economic and social paradigms through blockchain technology, we increase the economic prosperity of individuals and communities.

Why dont MicroMoney follow the ICO “gold fever”? We collect just as much money as we can wisely spend on the project https://t.co/RvYSFLqkvb pic.twitter.com/ODio21jVNV

Financial inclusion is a huge part of the equation when attempting to resolve the issues, which result in poverty and lower standards of living. MicroMoney is working to improve the financial systems to establish a sustainable and equal world in which individuals can afford to support their families and beyond. More information regarding its overall agenda and goals can be read on MicroMoney’s site.