Technology firms these days are caught in a wicked catch 22. The balance is found in the risks that companies face with DDoS attacks that require mass amounts of bandwidth, coupled with the desire for more rapid load times that consumers demand.

However, the problem is that when security is good, load times are slow. By extension, when load times are fast, security is generally lax, hence the catch 22. This inability to meet both facets of consumer demand has led to a general willingness to let security be weak in order to increase consumer load times. Just take, the recent massive hacking event at Deloitte, supposedly one of the more secure firms.

Additionally, the startling events surrounding the massive credit bureau hacking event serve as an unfortunate reminder of this issue, where the main password for private user information was ‘admin’. Even the SEC has now admitted substantial information was hacked from their EDGAR filing system in 2016, and they are just discovering the depth of the hack. 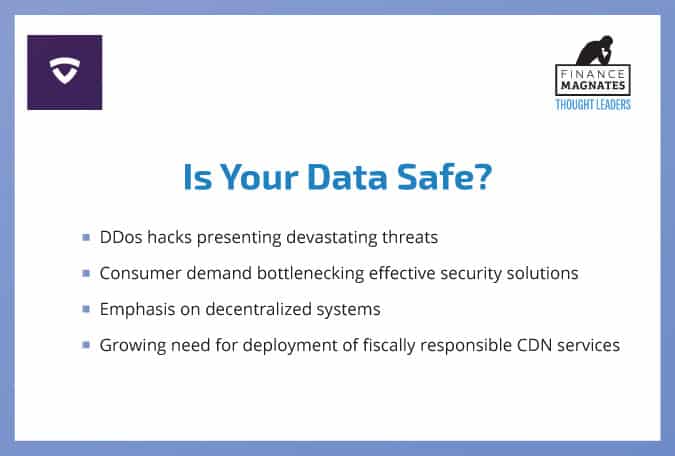 Hackers are running amok, and the Security world is overcharging and underdelivering. Something needs to change. And with all the hacking, one would think that companies would be increasing, rather than decreasing security. That’s where Blockchain, Ethereum and spare bandwidth will come to our aid.

A distributed denial-of-service (DDoS) is more common than you think. DDoS attacks occur when a group of previously compromised computers focus on a server or website to damage. The compromised machines target the victim with huge volumes of data in order to overwhelm the computer or server processor. This ultimately leads to a denial of service to real site users.

Some software programs exist that seek to foil DDoS hacks, but these older systems are often unable to manage the overwhelming data, and once one machine is compromised, others will quickly go down as well.

The problem, as you understand is the DDoS mitigation solutions today are centralized, so they are extremely expensive. But not only that, they are actually less secure. If hackers manage to take down the service, or if the company has infrastructure issues, the service is shutdown.

Surely, a decentralized and distributed system will be cheaper and more effective.

While hacking, and especially DDoS hacks are increasing rapidly, CDN services are also becoming challenging to use. Platforms and services are very costly and sometimes spotty in service. Traditional services use caches of data in varying geographical locations to shorten the physical distance from server to user.

While this model does provide functionality, it also contains limitations that are endemic to the platform as a whole. For example, traditional CDN services can be quite costly to have. Today’s data-heavy website environment requires large data caches, and since such platforms are priced per GB, substantial web traffic can cost companies millions in just a few short hours.

Consumers, wanting faster loading times, though, have driven web companies to CDN (content delivery network) services to obtain more rapid website load times globally, though not without significant investment. Legacy CDN platforms are, at best, constrained in their application solutions, while also being quite costly.

But what if, users around the world bend together and participate in a worldwide-like CDN and get paid for it?

Blockchain technology seems to be the new craze on every street corner. This technology seems to have a way of solving tech issues that have plagued some industry for years. And unlike some solutions that simply look for an excuse to exist in the blockchain, others stand as a necessary need.

Decentralization, simply, is the movement of data from a database onto a large bank of participating but distributed machines via a connected environment. And that’s exactly what Gladius is utilizing.

Gladius a pioneer in cyber security, and has created a system whereby the issues with CDNs and DDoS mitigation can be dealt with simultaneously, and is currently building this distributed model. The premise is that many people around the world have underutilized bandwidth.

Just like FileCoin allowed people to rent and monetize their spare hard disk space, Gladius will allow people to use their spare bandwidth and donate it to host static files in a worldwide distributed CDN, as well as donate bandwidth to websites to mitigate DDoS attacks. This is done through pooling the extra bandwidth amongst consumers who participate, and then in turn create a distributed bandwidth system in a competitive marketplace. 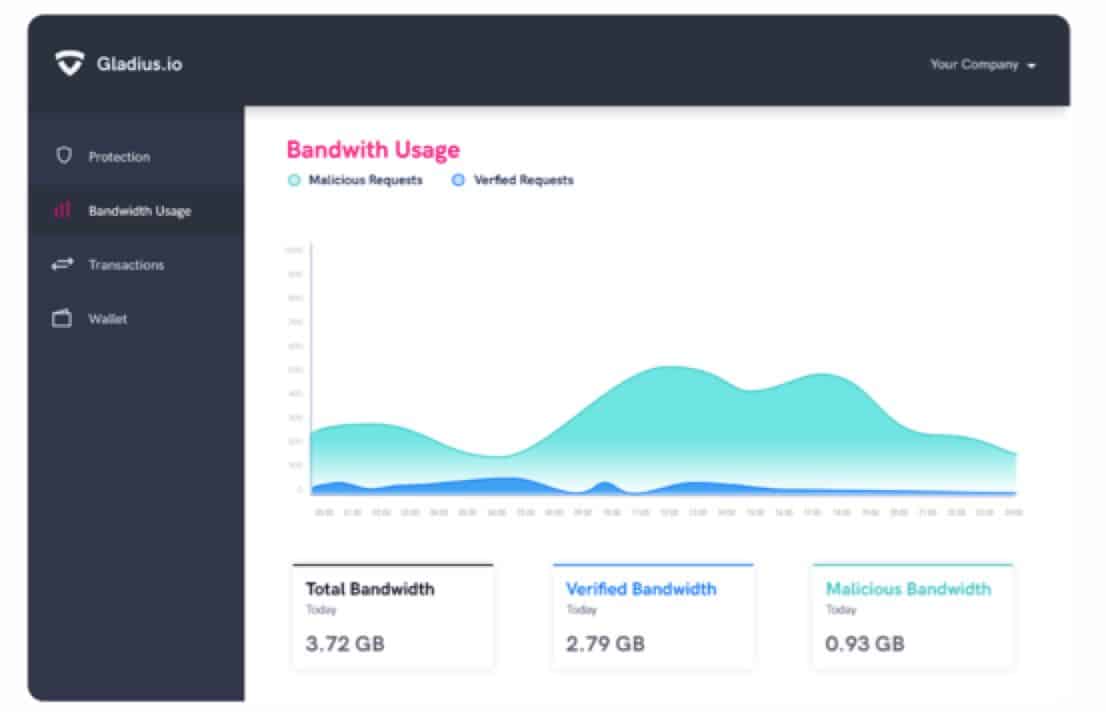 With sizable amounts of bandwidth at its disposal, the company will be able to effectively stop DDoS attacks and, at the same moment, offer fiscally responsible CDN services to consumers.

The extra benefits mean more protection, since a hacker will have to essentially take down nodes throughout the entire world, whereas if a more traditional DDoS mitigatory system is used, if the hacker takes down the centralized identity the protection ends.

In other words, the hacker won’t be able to take down the entire distributed network. Second, the CDN will allow faster geoserving since potential nodes could be anywhere, way closer than the ones being set up by a centralized CDN.

The Gladius platform can almost immediately begin dealing with DDoS issues. Gladius offers substantial improvement for DDoS attacks. The company succeeds by building a network where pools of bandwidth can be created by users, and bandwidth is the main requirement for DDoS control. 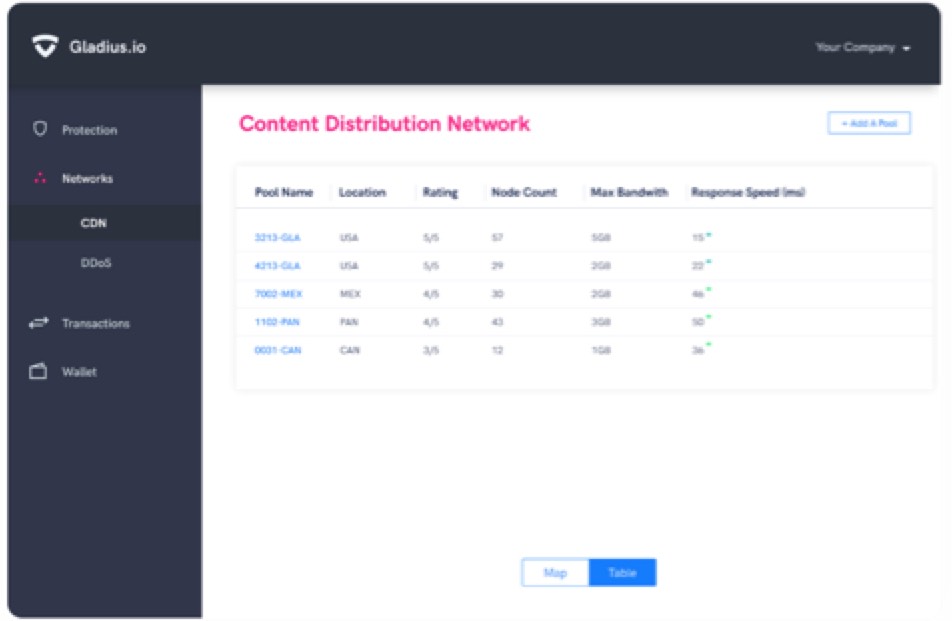 Because consumers have the capability of monetizing their unused bandwidth from their ISP, they can collaborate in order to create bandwidth pools that can then manage a sizable DDoS hack and the flood of information it produces.

And, because Gladius is a decentralized platform, it allows bandwidth buyers and sellers to communicate directly, meaning that consumers who want specialization can request for hand packaged security systems to be developed on the platform. Specialization, value, and better service – Gladius is putting together a complete package. 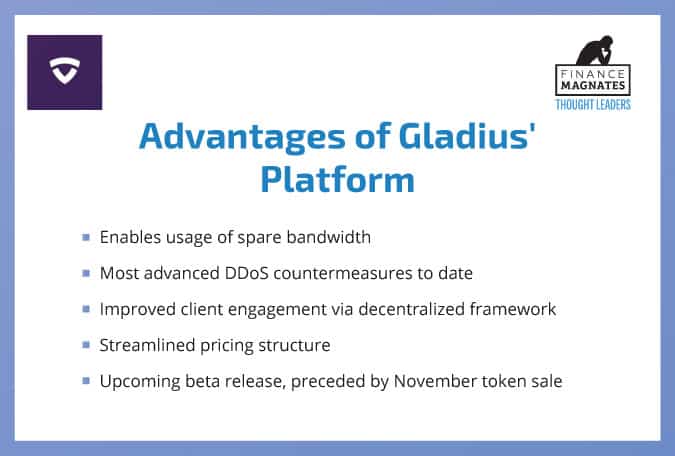 Additionally, the decentralized platform creates clear pricing structures with simple and clean interaction between members. Traditionally, CDN corporations are required maintain physical storage and processing centers globally, driving up pricing and service issues. Gladius, on the other hand, can provide decentralized resources of the same or better caliber, though without the substantial overhead.

Gladius is hosting a token sale in November. The beta will release in March of 2018, while the full version is planned for Q3 2018. The next generation of cyber protection will be a blockchain one, the question is, which tools and companies will be developed on top of it.