In the third such prominent event in 2016, the Italian electorate rejected the status quo over the weekend, opting to vote against proposed constitutional reform measures. The move, which is likely to throw the Italian political system back into chaos, has once again demonstrated that the self-assuredness of the European ruling elite should give pause for concern.

Already, the year has seen former UK Prime Minister David Cameron deposed, with Francois Hollande also not planning another Presidential bid, as they fail to accede to the will of the voters.

Europeans are evidently growing especially tired of the iron grip of Brussels and the unelected technocrats that are the driving force behind policy. Their rejection has manifested itself in the growing popularity of anti-establishment and populist platforms that are spreading like wildfire across Europe. 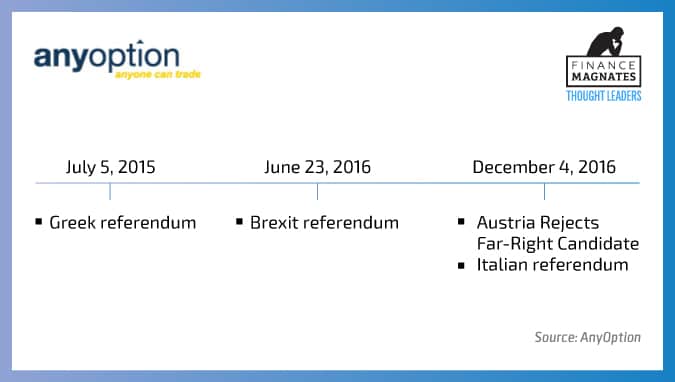 Although Austria rejected a far-right candidate in its own recent election, it does not negate the fact that the thought of political revolution is sweeping across the continent. Even in Germany, Angela Merkel is facing a mutiny within her own party thanks to ill-advised immigration policies.

In the Absence of Unity

One of the critical factors that European leaders do not want to face up to is the fact that greater political and economic integration has been elusive and created vast disparities within the monetary union. While easy to laud the European Union as the driving force behind the peace that has prevented a once-per-generation war that rips through the continent, it is quite apparent that many of the old divisions remain, simmering under the surface.

In modern times, the biggest gulf is between Northern Europe and Southern Europe. A difference in culture, values, and work ethic have made this dissonance ever more apparent.

While “beggaring thy neighbor” has been an oft-used example to describe the relationship between the North and South, the real problem is that the sovereign interests continue to supersede the best interests of the entire monetary union. Instead of focusing on ways to fight unemployment on an aggregate level, the lack of unified fiscal policy has invariably enlarged the economic wedge.

At a time when European interest rates are at record lows and economies are further supported by asset purchases, a unified fiscal stimulus program needs to be implemented to actually quell the lingering economic problems.

Many of the political problems that have emerged over the last two years are the function of economies that are not working to the benefit of the majority of the stakeholders. Unemployment remains high across the Euro Area in comparison to other advanced economies. It is hard to argue that progress has been made, but solely at the behest of the European Central Bank, not national governments.

The best example of this progress is Spain. In the absence of a functioning government for the better part of the last year, the Spanish economy is actually performing more admirably than almost all regional peers thanks to no political drag. Without a unified fiscal plan, all the monetary stimulus in the world will not be enough to fix Europe’s problems.

Out With the Old Guard, In With the New

Voters have been overwhelmingly underestimated in the last several years. Their willingness to accept the status quo has been challenged directly in the polls, with many believing they have a brighter future with fewer layers of bureaucracy. The UK proved exactly that point alongside other strong examples from across Europe.

The rejection of globalism is just beginning to take root as evidenced by the overthrow of the American political aristocracy just last month. Greater integration is not necessarily the solution for Europe unless it is prepared to go all in. The only reason the US economy is more highly functioning than its European peer is political and economic union.

Europe’s decision to enter a currency union without forming a workable political bloc has created unnecessary friction and tension. In many respects, it has been the primary source of economic migration. Thanks to the visa-free travel for citizens living under the European Union umbrella, most rationale individuals with the ability will move to locations that offer better economic advantages.

The most clear evidence of this phenomenon is Eastern Europeans moving westward in search of better opportunities in places like Germany and the Netherlands.

Give Sovereignty Back to the People

Unless the European Monetary Union and European Union can find a way to restore democracy that gives the people more of stake in their own future, the integration idea is doomed to failure. Why should citizens have the ability to choose their own national leaders, but not the overarching political directors? Politics by appointment is an easy way to see a potentially great idea go by the wayside.

Infighting will further reduce the region’s global influence and relevance

But before Europe can take that step, it must find a way to heal its own internal divisions while developing a mechanism for empowering the people who ultimately must support it. Without this necessary support, the cracks in the foundation will continue to grow, eventually forcing the union apart.

If Europe cannot come to an arrangement to push an agenda that supports all elements of society, the pressure on the Euro Area will remain intact for the foreseeable future, driving the Euro even lower versus global peers. Infighting will further reduce the region’s global influence and relevance as localized disputes capture the focus of policymakers instead of a taking a more macro view of the lingering problems.