As Europe’s leading economy prepares to elect a new Bundestag in the post-Merkel era, institutional and retail investors are already gearing up to trade the opportunities that will emerge in the forex and EU stock markets before and after the German Elections on September 26th.

Veteran fundamental analyst and Head of Investment Research at BDSwiss Marshall Gittler shares his personal insights, views, and projections on the possible impact of the German Elections on different financial markets.

1. Why are this year’s German Elections considered crucial for the EU markets?

Within the European Union, Germany is often seen as the de facto leader and as a key motor for policy and decision-making.

As the pivotal economy in Europe, accounting for nearly 30% of Eurozone GDP, Germany’s future strongly influences both the continent and its currency – the EUR. Under Ms Merkel’s tenure, this influence grew even further.

What makes this election season extraordinary for Europe is the departure of the incumbent chancellor after 16 years in power and the uncertainty on both the national and international level over what exactly comes next.

As Germans head to the polls on September 26 to kick off their Superwahljahr (super election year), the race for the chancellery is wide open — and in the wake of Covid-19 and the aftermath of Brexit — the world will be watching closely to find out in which direction the Germans will take their country.

2. Who is leading in the polls? What is the most likely coalition?

The polls show the CDU/CSU party in the lead, but with the Greens, rather than the SPD, in second place. As usual, no party is likely to be in a position to govern by itself.

The focus, therefore, is on which parties are most likely to form a coalition following the elections and how their need to compromise in a coalition might affect the policies.

The possible coalition combinations are often referred to by the pattern that their colours would make. Currently, the only two-party coalition possible seems to be the CDU/CSU and the Greens (the so-called “black/green” coalition).

We believe this is the most likely outcome of the election at the moment. In terms of who will be Merkel’s successor, Annalena Baerbock (co-leader of the Greens since 2018) and Armin Laschet (leader of the Christian Democratic Union and governor of North Rhine-Westphalia) are the two most likely candidates.

3. What are the main campaign issues?

Guiding Germany out of the coronavirus pandemic, with a focus on reviving the economy, remains the most pressing issue on the domestic front for both leading parties.

Meanwhile, climate policies will be given a greater sense of urgency after the recent floods, while the greening of the country’s industrial sector is a key issue on the Greens’ agenda.

Of course, both campaigns will also focus on a familiar stew of issues, including digitization, foreign policy, social equality, national security, migration, and EU politics.

4. What are the most probable scenarios when it comes to future policies and how can these impact the markets?

A CDU-Greens coalition would have broadly similar policies to the existing government, but with a stronger green agenda as the Greens would seek to extract concessions from the CDU.

This would include a steeper carbon price path, more subsidies for renewables and more public investment in decarbonisation.

On the foreign policy front, the CDU will seek continuity on its current trade policies with China and its positioning on Russia, including the Nord Stream 2 pipeline that is expected to be completed later this year and which will transport natural gas directly from Russia.

Meanwhile, the Greens are against the pipeline.

Most notably the Greens will push for the implementation of higher taxes for top income earners, making the debt brake more flexible, supporting a common EU fiscal policy and reforming the Stability and Growth Pact (SGP) rules (which limit countries’ budget deficits).

While such deep reforms are unlikely to be implemented, we would expect the EUR to depreciate should the Greens secure a decisive parliamentary victory.

5. Will anything change regarding the reform of the financial system or management of the euro crisis?

All the major parties share a strong commitment to the EU, the transatlantic alliance, and the euro. Europe can count on the next German government to provide stable, predictable leadership.

A CDU-Greens coalition would most likely result in a reform of Germany’s fiscal rules to allow for more public investment to fight climate change and set the tone for similar policies on an EU level.

Overall, however, the mere fact that Germany’s government will be a centrist coalition means that its European and international policies will be variations of the status quo.

Due to the limits set in the German constitution, the oversight of the constitutional court, and the role of the Bundesrat (Upper House), the scope for large-scale shifts in the overall stance of domestic fiscal policy and of German guarantees for EU-wide borrowing is limited regardless of who gets into power.

Major shifts in policy are usually negotiated and agreed upon between the mainstream parties, both in the ruling coalition and in opposition. Such shifts usually reflect longer processes, not sudden policy reversals when a new government enters office.

Part of that is cultural; part is because of the need for a coalition government, which usually ensures some continuity between governments.

6. How will the markets be affected on a long- and short-term basis?

Bundestag elections are held around the same time in September. If we look at how the EUR/USD behaved from the beginning of August until mid-November, we see that in general, the euro has risen in the days leading up to the election, only to lose steam immediately after.

This probably reflects a typical “buy the rumour, sell the fact” reaction: investors buying EUR in anticipation that the CDU will prevail, then taking profits shortly after. 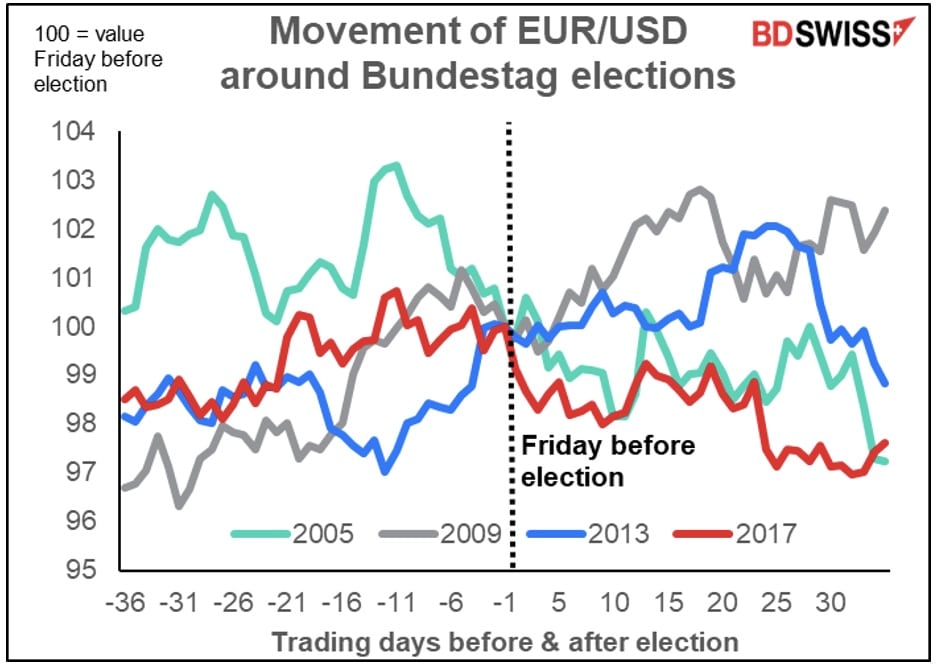 Interestingly enough, the CDU/CSU, the Greens and The Left all favour the introduction of a digital euro by the European Central Bank to guarantee means of payment.

Meanwhile, we will most likely see the German push for more eurozone fiscal stimulus being implemented via a “Germany first” investment agenda (and then have some trickling through effects for the rest of the eurozone), rather than a “euro first” push. This will likely also provide short term support for the DAX.

I believe a CDU/CSU + Greens coalition would be beneficial for the EUR in the long run.  Hopes of faster growth could attract money into European stocks, while a left-leaning coalition could result in higher bond yields, which will also make the EUR more attractive.

7. How can traders keep up with the markets and major economic events such as the German Elections? What does BDSwiss offer in terms of market research?

Keeping current on important news is now more critical than ever. If there’s anything that the events of 2020 have taught us, it is that market opportunities can arise from the most unexpected and unlikely circumstances.

The difficult part is sorting through all of the available news to get to the updates that are most salient to your investment portfolio.

BDSwiss simplifies this process by offering targeted, timely, and actionable research and information on different asset classes and market sessions through a series of live webinars, daily analysis articles, weekly outlooks, real-time trading alerts, and of course, special reports on major market movers such as the German Elections.

This information is made available for free to everyone, even if they are not ready to invest.

As someone who has been following and analysing the markets for over 30 years and can still be surprised by the turn of events, I can tell you that when it comes to investing, strategy and knowledge are key.

Being able to draw upon the expertise of senior analysts and experienced industry professionals can give you a real strategic advantage when it comes to trading.

At BDSwiss our research and support team are also extremely responsive. It’s something I see daily during our live analysis webinars, with my co-host Frank Walbaum, where we try to simplify and answer questions from traders live.

8. How can traders, investors, or institutional partners benefit from reading your German Elections report?

Forewarned is forearmed! It’s essential to understand what’s been happening in the market before you start trading – especially when you are trading during a high impact event such as the German Elections.

Even if the market trades differently than you’ve anticipated, at least you have a set of expectations to measure these trends against and respond to the latest developments.

In my German Elections 2021 Market Outlook entitled “Germany’s election: What it means for Germany and Europe”, I discuss some prevailing forecasts on the key FX and stock market trends that we may expect to see in the EU markets pre- and post-election.

My analysis is based on major Bloomberg consensus estimates, which are derived using median projections statistics by over 18,000 companies, as well as galvanising the projections of dozens of economists and analysts on a global scale.

Of course, these forecasts are just market speculations and personal insights. It’s always important to remember that markets are extremely volatile and hard to predict, and as we saw in recent years, anything is possible.

About the BDSwiss Group:

Since its inception back in 2012, BDSwiss has been providing top-class products, a wide range of platforms, competitive pricing, and fast execution on more than 1000+ underlying instruments including Forex, Shares, Commodities, Indices, and ETFs.

BDSwiss complies with a strict regulatory framework and operates its services on a global scale under a number of different entities.