Companies usually collaborate by creating bridges between themselves. This includes opening firewalls, creating channels between their data centers, and having active guards on what’s going in and out of the gates. Blockchain technology is changing all that, and in case of the Ethereum blockchain, this process is streamlined, facilitating deals with partners remotely. This relinquishes the need of having all the required signed documents passing the gates, as opposed to the usual ways of doing business.

Such distributed collaborative platforms could be instrumental in sharing efforts in building new products, especially for expensive developments. However, it’s not yet possible, given that all data on the blockchain is public. When you communicate remotely to have a deal with your partner, all the documents you bring with you become public, not only to your partner, but also to anyone looking at the blockchain sky, ever.

This does not preclude the possibility of new opportunities however, providing you could, in some way, make a deal and keep some documents private. For example, it is possible to prove you have a great library and let your partner look at it randomly, without having all your books permanently available to anyone.

Or an individual could prove you keep your accounting clean without all other parties knowing you’re spending all the money you earn every month, so they don’t know if you’re a natural spender. Being able to talk about some private documents, to tell stories that contain secrets, gives some new partnership opportunities not often possible in a completely transparent world where everybody knows everything about you anyway. Mystery sometimes adds a new element and can make new deals attractive.

Unfortunately, limitations still exist, given that current blockchain technologies do not yet possess any answer for companies’ data privacy handling, arguably the last barrier for these projects to come to fruition. In order to allay these constraints, Rockchain is creating a blockchain-orchestrated network of links between private datasets. The group’s efforts represent a new dynamic set of links between private actors.

A new week has begun and a new is article available !
Check it out on the link below ↓↓↓ https://t.co/gAXOT8mJYW

For its part, the group believes that a blockhain respecting data privacy in the blockchain contract logic will extend the possible use cases, and that’s what’s driving its engineering. While exchanges between private and public infrastructure networks are technically possible, these are slowly becoming mainstream in the cloud services networks.

The cloud services market has a steady growth (currently 19 percent a year, down from 40 percent a year earlier) and is expected to reach a value of $247 billions in 2020, per recent studies. From a public only approach, cloud services have evolved into a hybrid approach where most companies have their internal private cloud talk to public services providing technical services.

80% of companies now utilize hybrid clouds – we can expect blockchain infrastructure services to evolve by the same trajectory, linking private networks with the public blockchain.

Regulatory pressures, such as the GDPR European regulation, which enforcement is planned on May 2018, requires new auditing measures hardly possible in current centralized IT systems. For example, these require tracing the history of data transfers for “sensitive data”, as well as an up-to-date localization of personal data for any individual in complex private IT networks.

These kinds of “oracle” performances are probably only achievable using a blockchain permanent and distributed store, which would listen to data transfer events on the private network. This was the impetus behind Rockchain’s deploying its DappBox distributed file system.

In most of the cases, the role of a regulator is to measure the data integrity of some data producers. While doing this, authorities are always compromising the strategic nature of the data. This can be problematic as regulatory authorities are totally disconnected from business facts, which is difficult for humans, tempted by the opportunities when knowing too much about possible business arbitrages. 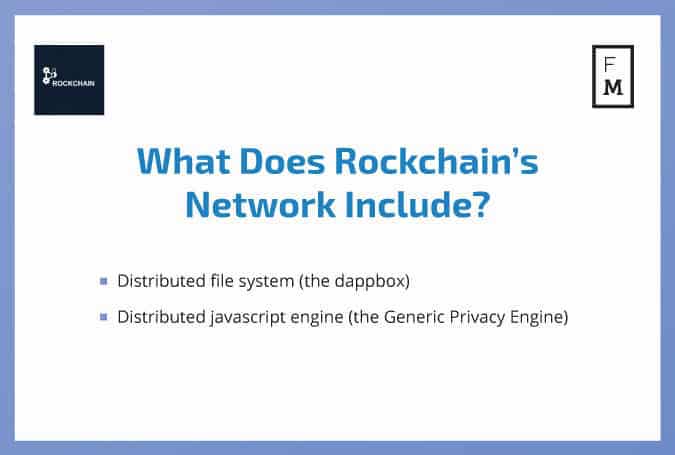 Hypothetical robo-regulators should be able to assess the integrity of data without knowing those data. That’s what Rockchain has built with its GPE, the Generic Privacy Engine.

Dealing with privacy issues is also important in “B2C” markets such as health and finance. Consequently, the first application built on Rockchain infrastructure is designed to deal with human DNA privacy, also harnessing the group’s GPE engine. This DNA data could be used for “KYC” issues, enabling your identification on online services, but it could also be used for health recommendations, insurance policies, and more personal matters such as dating sites.

In order to help launch its ambitions and pursue its decentralized agenda, Rockchain will be launching an initial coin offering (ICO) starting on November 1, 2017. The details of the ICO are outlined in full in Rockchain’s whitepaper.