Which major events are expected to shape the markets in 2020 and what are the most probable scenarios? Read the exclusive market insights and forecasts of leading Fundamental Analyst and BDSwiss Head of Investment Research Marshall Gittler.

The year that just ended has been one of political turmoil, global uncertainty caused by Trump’s trade war, economic slowdown, and yet record-high stock prices coupled with near hibernation in the FX market.

The year just starting is shaping up to be even more dramatic politically, with Brexit from January and the US impeachment trial and Presidential election later in the year.

How will this affect currencies? Which currencies might benefit, and which suffer?

First, let’s look at why all this Sturm und Drang failed to make much of an impression in 2019.

There’s no doubt that the FX markets were in the doldrums in 2019. If we look at the range between the high and the low of each currency pair over a six-month window, we can see that the average hit the lowest level in two decades in July and ended the year not far off. 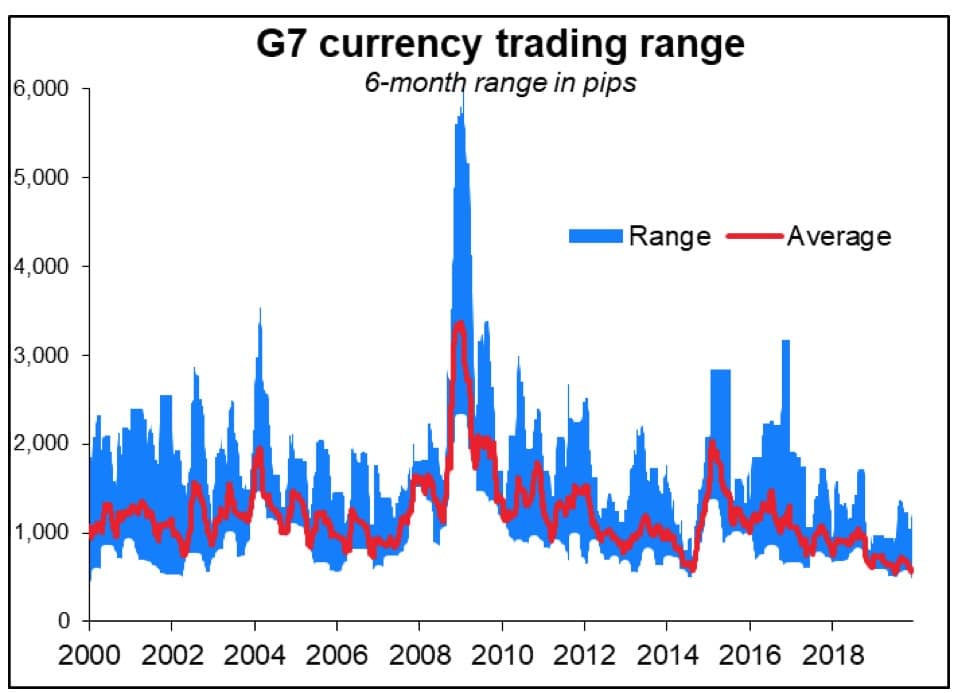 The narrow range is also evident if we look at how the various currencies performed during the year vs USD.

The main reason for this narrow range, I believe, is the narrowing dispersion in economic performance among countries.

If we look at the manufacturing purchasing managers’ indices (PMIs) for the major currencies, the dispersion among them came down as the PMIs themselves came down. (Dispersion rose from June to September but fell after that.) 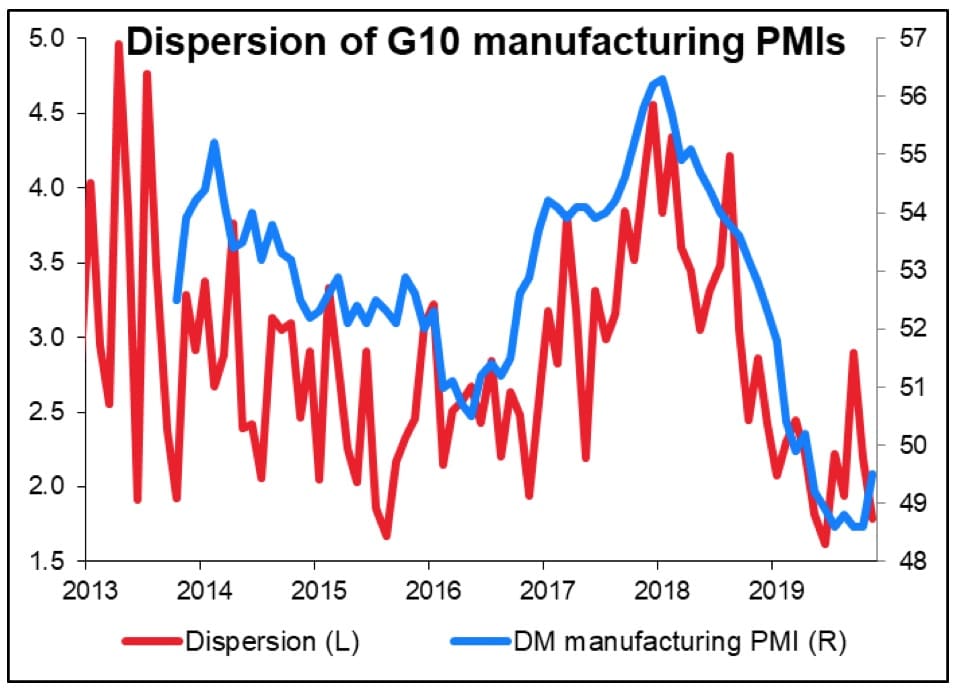 The market doesn’t see monetary policy pulling us out of these ranges in 2020.

Most central banks are expected to be on hold during the coming year, with less than a 50-50 chance of a rate cut for most countries (and virtually no chance of a hike). 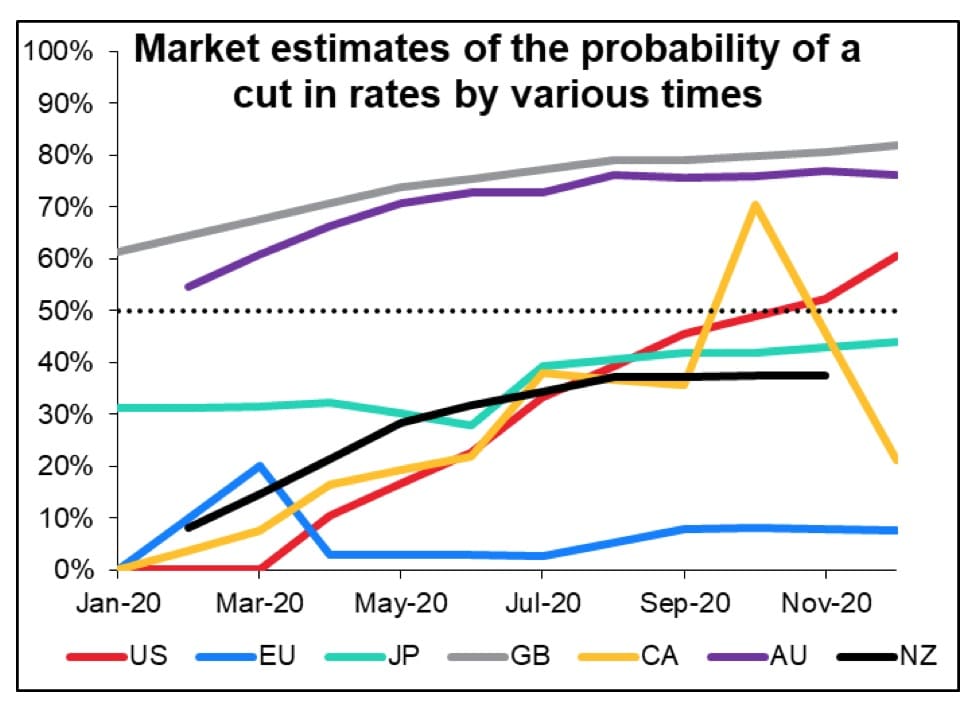 However, economic performance may start to diverge as one of the major issues the currency market faced in 2019 will be less an issue in 2020: trade.

It looks like trade will be much less of an issue in 2020 than it was in 2021. The US and China have signed “Phase One” of their trade agreement.

While much of the details remain unclear, what is clear is that the US wants the issue resolved ahead of the November election so Trump can present some “wins” to those voters who still support him – not to mention get soybean prices up.

At the same time, the US, Mexico and Canada finally signed the US-Mexico-Canada Agreement (USMCA), the replacement for the North American Free Trade Agreement (NAFTA).

The #1 problem that faced global financial markets in 2019 should be much less of a problem in 2020. That would be an enormous change.

(Although of course, we must remember those old sayings, “There’s many a slip twixt cup and lip” and “don’t count your exports until they’ve shipped.”)

The tit-for-tat tariffs had a huge impact on global trade and business sentiment.

Many central banks also specifically mentioned trade uncertainties when explaining why they were cutting interest rates or keeping rates low. 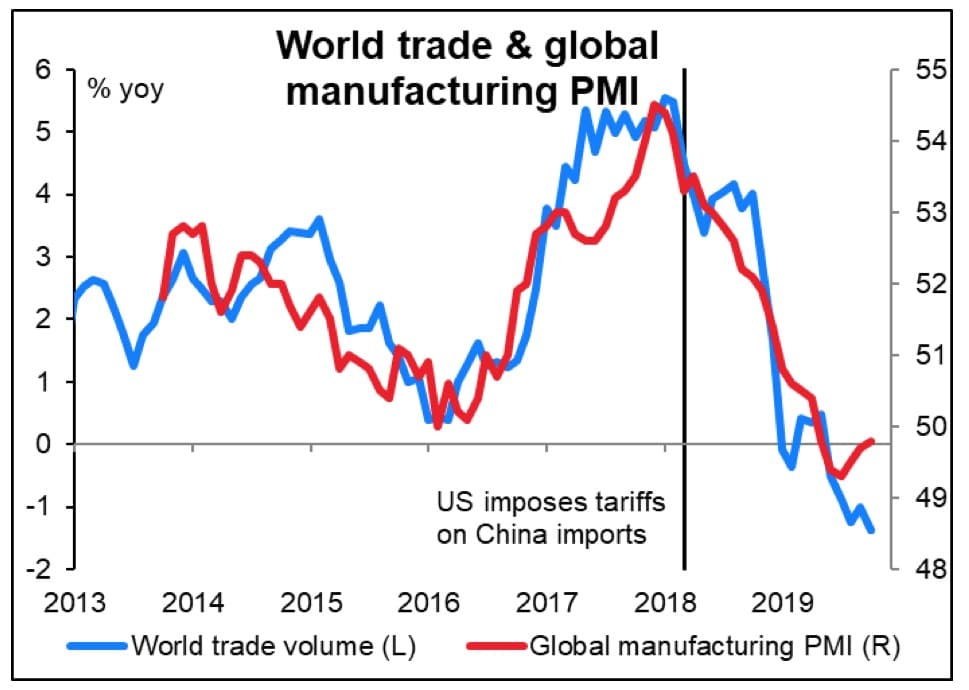 Many trading sessions were dominated by whatever ambiguous tweet or headline in China’s Global Times appeared that day.

Fewer such interjections may result in less volatility for AUD/JPY. In theory, it should also result in a higher AUD/JPY too, but of course, that depends on there being no other risks to take its place – something I wouldn’t be so sure of. Just look at what happened with the US and Iran recently.

Germany is the dominant economy in Europe, with twice the impact on overall Eurozone GDP that would be expected simply from its weighting in EU statistics.

And Germany has been the major victim of the global trading slowdown, not China.  An improved trade picture suggests a better Germany economy and therefore perhaps a higher EUR/USD. 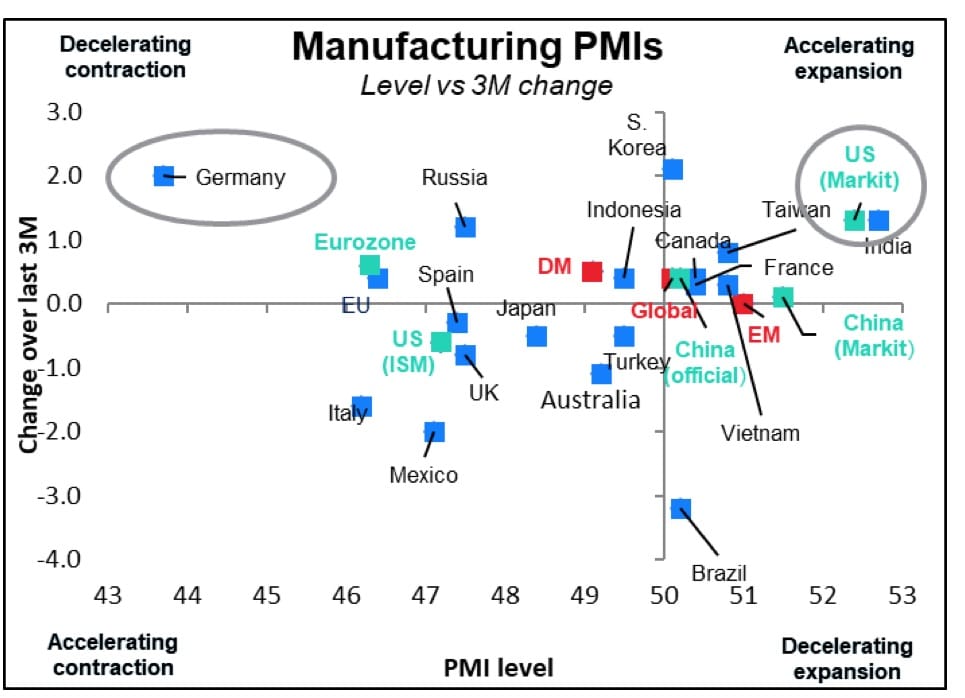 BDSwiss is dedicated throughout the years to offer its clients high-quality research & daily live analysis, to keep them informed on the market moves as well as a complete forex educational suite catered to cover the needs for traders of all levels.

BDSwiss Group is a leading financial group, offering Forex and CFD investment services to more than a million clients worldwide.

BDSwiss as a brand was established back in 2012 and has since then been providing top-class products, a wide range of platforms, competitive pricing and fast execution on more than 250 underlying CFD instruments.

BDSwiss complies with a strict regulatory framework and operates its services on a global scale under different entities.

With 200+ personnel, BDSwiss Group’s holding company is located in Zug, Switzerland and maintains its operating offices in Berlin, Germany and Limassol, Cyprus.