For Steven Morell and his team at BTC Global, bitcoins aren’t viewed as a new currency, but the technology of the future. In their world, people from around the globe swap digital currencies as a form of payments, while goods are sent in the form of emails, with the final product being printed by the buyer with a 3D printer. At the heart of all this commerce, are a new form of banks and financial companies, that will be used to store, exchange, and provide merchant services for digital currencies.

In an interview with Steven Morell, the Co-Founder and CPO of BTC Global, he explained to Forex Magnates that looking at charts of bitcoin prices or analyzing whether a bubble exists is useless, since it is more of an emerging technology than a new asset class. Morell said “Don’t look at bitcoins or other crypto currencies and their prices as an asset class. We aren’t talking about it as a currency, but as a disruptive technology – that is exponential. “ He added “When traders are looking at the price chart of bitcoins, they are looking at it with their own price analysis and whether it is overvalued or now. But you have to view it like you are looking at a chart representing technology. Imagine looking at a chart of that showed the growth of new email addresses in the mid 90’s. You wouldn’t say that the there was a ‘bubble’ of email users. Transfer that to bitcoins, and it becomes a chart about technology adoption and not currency prices.”

Targeting this world of changing technology, BTC Global is creating a diverse set of resources to cater to this future. Products on the table include secure solutions for cold storage of bitcoins, merchant services, and trading platforms. Already in existence is BTCXperts, a global directory of bitcoin business and professionals providing consulting services, and coming soon is BitBilly, an online bitcoin payment system, and BTCoinSafe, a high security bitcoin storage facility.

At the core of BTC Global’s operation is BTC.UY, a bitcoin exchange and trading platform. BTC.UY follows the direction of other emerging bitcoin platforms in that the aim is to provide a high performance system to attract traders from other asset classes that have greater expectations of how an exchange should operate. According to Morell, the exchange will be powered by a professional trading platform that uses a high performance trading engine similar to what is available to other asset classes. According to BTC Global, their order matching engine can handle over 300,000 orders per second, which BTC believes is 10,000 times more capable than technology currently being used at the largest bitcoin exchange (data about the engine was shared on YouTube recently). Vladimir Marchenko, CTO at BTC Global was quoted as comparing the system to that of LMAX, which provides a low latency order matching platform at the center of its forex trading exchange. 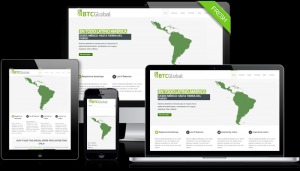 In contrast to other exchanges and platforms being founded, BTC.UY aims to resemble traditional stock exchanges. As such, it will include opening and close times. Morell explained that using this system would lead to more consistent volumes, which would in-turn produce better data for traders. In addition, BTC believes that volumes will be aided by the complimentary payment solutions services such as the above mentioned BitBilly which is expected to send orders to the exchange for fiat conversion.

Currently, BTC Global expects to launch BTC.UY in the next few weeks, with an initial rollout in six Latin American countries; Uruaguay, Chile, Brazil, Argentina, Mexico, and Paraguay. Morell explained that the limits on a global launch aren’t limited to technology, but to legal and financial issues involved with onboarding accounts from different regions. In Morell’s opinion, having a strong banking relationship is the biggest hurdle to climb when building an exchange. Recent examples of exchanges being shut down include Bitfloor and Bitcoin24, where their banks closed their accounts after becoming suspicious of money flow. In Bitfloor’s case, it had initially been closed for a period of time in 2012 following a hack attack, but had reopened.

With BTC.UY, accounts will be opened directly with the exchange or through a local representative. The use of local offices, which may be BTC.UY subsidiaries, is to adhere to regional rules and regulations that are required for currency transfers and trading.

Another difference for BTC.UY is its choice of headquartering in Montevideo, Uruguay. For BTC Global, the choice of location is by design and fits their long-term vision of bitcoins and digital currencies. Dubbed as the ‘Switzerland of America’, Montevideo is known for being pro-business with financial stability. As a result, the city has become the home to international backed private banks, servicing many of the wealthiest citizens of Latin America. The city has also attracted financial firms using Montevideo as their regional headquarters. In the FX world, a recent example was Saxo Bank’s announcement in February that it had opened a regional office in the city.

In Morell’s description, Montevideo is the “perfect location for banking and finance, it has low corruption, a true democracy, political support for financial firms. It’s the perfect place for a startup.” Morell isn’t the only who shares those feelings, as along with Chile and Brazil, Uruguay has become a growing center for technology startups within South America.

As a bitcoin startup, for BTC Global it was important to launch their exchange in a location that would be supportive of the long term direction of digital currencies, and how they can overtake fiat money. In that regard, Morell explained that they have received political support for BTC.UY, and that the Uruguayan government is interested in their country becoming the host of ‘Swiss Banks’ for crypto currencies.

Founded by digital currency supporters, BTC Global’s team is composed of people with very diverse backgrounds from around the world. The company boasts early seasoned entrepenuers, bitcoin pioneers, e-commerce professionals and in their own words ‘tech nerds’. The firms is headquartered in Montevideo, with additional offices in Memphis, Tennessee and Berlin, with employees working together from different parts of the world.

Share this article
Tags: bitcoin / lmax
Got a news tip? Let Us Know

this bitcoin thingis much more real than most realize and its use will be a household name in the next 3-5 years or so. Obviously cash-based societies and developing countries will adopt it much quicker, mainly due to the mindset of the consumer population (self service, cash payments or deposit for majority of goods/services, distrust of central govt, etc). while the usd is a good hard currency to use, bitcoin makes for a much better virtual currency.

– do you have any more to say about Uruguay?

@Jon – I added the link for the Saxo Bank article.
As mentioned in the article, South America has been getting more traction as a startup hub. In regards to Uruguay, the government is accommodating and wages are lower than in North America or Europe. Also, immigration limits aren’t a big factor which is a complaint of US startups when attracting global talent.

What Saxo Bank article are you talking about? I see no such thing above.

there is a link in the article to this post http://forexmagnates.com/18128/