When Scalable Capital started its presentation at Finovate this week in London, Co-Founder and Managing Director Adam French asked a question on many people’s minds: “Does the world need another robo?”

Scalable’s angle is that institutional risk management technology is ready to be put in the hands of retail investors. With an investment universe purely in the ETF space, trading is rule-based quantitative, the team is formed of primarily engineers, and the system has been live in Germany for two months while the UK’s FCA approval came through this week.

A lot of large banks became our client because they bought some Fintech company.

Instead of asset class allocations based on a risk category, clients are allocated ‘risk units’ that get used for a trading strategy, and portfolios change as market risk does. In other words, just because market risk changes, doesn’t mean that the client’s tolerance for risk needs to.

Speaking to Finance Magnates, Erik Podzuweit, Co-Founder and CEO at Scalable, said the firm’s competition is banking advisory but there’s a big opportunity with people who are doing nothing with their money at all. 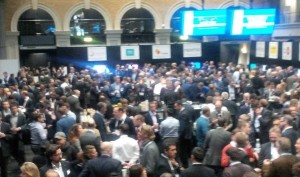 In Germany, there’s some €2 trillion languishing in bank accounts not earning interest, said Ella Rabener, Co-Founder and Chief Marketing Officer at Scalable: “People don’t know what to do with their money, they are afraid to do it on their own in the capital markets because they know there is quite a bit of risk involved.”

Average initial investment is between €40,000 and €50,000, and tends to come from higher earning professionals. Scalable has no plans to sell into institutions, however. “We don’t want to become a software provider.” said Podzuweit.

Rabener added: “There is no white labelling of any form. We really want to become a brand.”

On the other end of the spectrum is Capitali.se, which has created a kind of virtual assistant to take your words and convert them to trades. Just type in what you want to buy and under what circumstance you want to exit – either in trader or common language – and the machine works for you. It can also tell you how to do it better.

The way we envision it, you will manage a portfolio of your ideas.

Unlike Scalable, however, there are no designs to be its own shop. “When we offer it to banks and brokers, we integrate into them and give them a white label solution and they can offer it to their clients.”

For market data provider Xignite, about 40% of clients are developers for technology companies selling software to institutional or retail customers. Another 40% are banks, brokers, asset managers and hedge funds. The remaining are corporate businesses, with a big portion consuming FX data.

In the last couple of years, the fastest growing client base had been Fintech though there is now a shift into banks feeling the competitive pressure, said Xignite’s CEO Stephane Dubois. Xignite recently completed a $20.5 million round of funding led by QUICK Corporation, part of the Nikkei Group and the largest financial information provider in Japan.

“A lot of large banks became our client because they bought some Fintech company that was our client…Some of them are buying those firms and incorporating them into their model,” he said.

Banks’ cost structures were restrictive in terms of what kind of customers they could afford to serve. Fintech companies came in and automated it all. “They removed all this friction that you had in the market and essentially lowered the profitability points and lowered the cost it takes to service customers,” said Dubois.

It’s not like the Fintech companies will kill the banks.

But is it really competition between Fintech and the banks? Or is there a lot of cooperation going on? After all, some of the major investors in Fintech companies are institutional.

There has been a shift, he noted. At previous Finovate conferences, there were quite a few companies wanting to become the retail player offering it all: the trading, the advice, the payment service, etc. Now, it’s more about selling software that a firm could build a robo-advisor with, for example.

Jehan de Castet, CEO of Fluo, a robo-advisory service provider for the insurance industry, said part of the push is that customer processing needs to be cheap, and that means automation. “With the new robo-advisor in particular, you are able to treat even lower profit consumers in the right way rather than shutting down this market.” Fluo works with firms such as Allianz, AIG, Generali, and Axa, said de Castet.

There are two ways to see Fintech’s role: disruptor or collaborator, said Amaury de la Lance, CEO at Aston iTrade Finance. “The disruption way is to build a business where you fight with the bank and the financial institution, which is a great idea and it can work especially on the B2C market.”

Aston decided to go towards collaboration by helping corporates with their invoices. De la Lance explained that businesses are looking for short-term funding, and Aston gets cash to corporates using several strategies: reducing payment delay; connecting corporates to an insurer covering non-payment; and considering cash-raising options in the form of  invoice securitization via fund managers. But the platform remains proprietary to Aston, he added.

“We are purely on B2B and collaboration, which is one of the part of the Fintech market.”

The extent to which working with traditional banks becomes a popular rallying cry remains to be seen, since in its own tradition Fintech has made waves by threatening to cause upheaval in the established order.

Still, looking back on Finovate’s two days, Xignite’s Dubois said that the word used most was ‘white label’: “It’s not like the Fintech companies will kill the banks. The banks will evolve.”