Last week, fintech, and specifically mobile payment innovation, was on display at the Mobile World Congress in Barcelona. At the event, Samsung launched its equivalent to Apple Pay, Samsung Pay, LG’s senior executives discussed a wider encompassing fintech strategy they are working on, while Visa and Pizza Hut partnered to unveil an onboard pizza ordering system for cars. With Apple presenting its ‘Spring Forward’ event yesterday, further fintech news was expected as the firm was set to provide more information on its Apple Watch, as well as an update on Apple Pay.

Overall, the main event was pricing and additional information about Apple Watch, as well as the surprise launch of a new Mac. However, Apple’s CEO Tim Cook also provided some bullish figures about Apple Pay. According to Cook, the firm has more than tripled the amount of retail locations accepting Apple Pay to 700,000 from 220,000 at its launch. The figure includes 40,000 soda vending machines. In addition, the cards can now be loaded from 2,500 issuing banks. 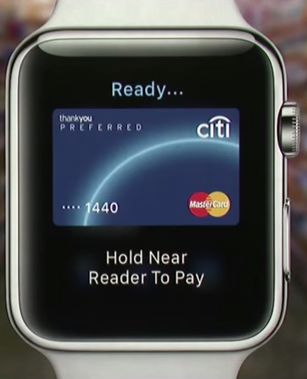 In regards to Apple Watch, one of the questions left from its unveiling of the product last year, was how Apple Pay would work on the device. On iPhones, payments are authorized using the phone’s fingerprint authentication. With the Watch, authentication is linked to iPhone. It works in that upon strapping on the Apple Watch, users authenticate the connection with the phone’s fingerprint device. At that point, as long as the watch remains on their wrist, sensors verify that the rightful owner is using the device to make Apple Pay payments.

With the smaller screen, the apps are condensed versions of the larger mobile apps. Like other apps for the Apple Watch which are difficult to input information, the finance related apps can be viewed as more appropriate for passive functions, like being able to receive notifications, as well as quickly looking up data like stock and portfolio figures as well as banking transactions. Although, with Apple Pay, the watch has an active role as users can simply pass it over contactless terminals to transact a payment without further verification or signatures.