Thomson Reuters has just announced the company’s latest foreign exchange trading figures for the previous month and the results are not impressive. The total average daily volumes (ADV) recorded in June on the company’s Thomson Reuters Matching and FXall platforms increased by 6 percent when compared to May, marking $375 billion.

The number remained lower when compared to last year, when the volatility on the foreign exchange markets was hitting multiyear lows. Looking at specifics, the figure reported in June this year is lower than a year ago by 3 percent.

This number doesn’t look particularly worrying in light of the annual decline, however if we compare the figure to one of the biggest competitors of Thomson Reuters on the electronic foreign exchange market we see a big divergence.

Earlier this month, ICAP’s EBS foreign exchange broking unit reported that ADV totaled $100.8 billion. The figure was higher by 31 percent when compared to last year. Looking at the trends it seems that ICAP’s EBS is recovering some ground it lost earlier mainly to FXall.

Thomson Reuters reported that the ADV for spot trading totaled $108bn last month. The figure is marginally lower than May and 6 percent down when compared June 2014.

The remaining $267 billion were realized in forwards, swaps, options and non-deliverable forwards (NDFs). 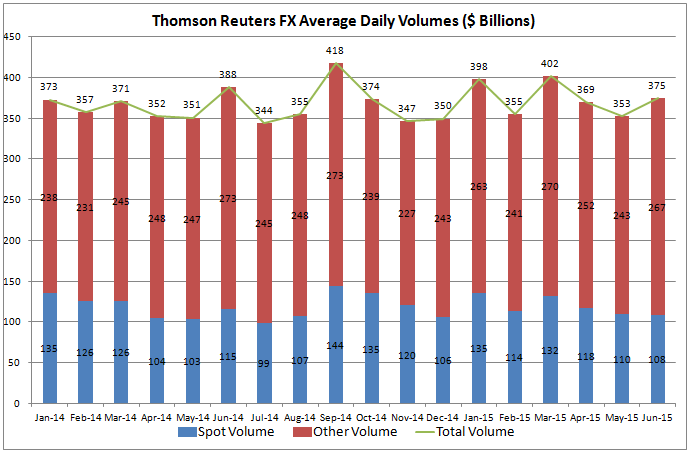