Data makes the world of finance spin. Indeed, real-time data from the global stock exchanges is of paramount importance for almost all traders or trading firms, including those dealing with CFDs (contract for difference) that follow single stocks or indices.

The popularity of CFD trading has taken off as margin trading brokers seek to differentiate their offering and allow OTC (over the counter) customers access to products that would traditionally have been traded on an exchange. Coupled with the steady increase of volumes due to the ever more ubiquitous practice of automated trading, accessing real-time data feeds is essential.

The challenge is that you’re paying for that feed, but the individual you’re providing it to then passes it on.

As more and more traders clamor to access real-time market data, the issue of how the data is packaged, sold and disseminated is becoming a concern within the industry. Indeed, several reputable industry sources have told Finance Magnates that the exchanges are clamping down on shady, third-party brokers that are redistributing the exchanges’ data feeds without license to do so, effectively circumventing the exchanges’ fees and contractual conditions.

Finance Magnates has been investigating the issue. Given its sensitivity (as a number of exchanges, with the help of regulators, clamp down on the dodgy practice), many executives with whom we spoke did not want to be named. However, it is precisely this reaction that stresses the importance of the topic.

In order to keep an eye on how an underlying asset is performing, brokers rely on real-time market data feeds from the exchanges, such as CME Group, the London Stock Exchange (LSE), or BATS Global Markets.

The question is how brokers access the data, as not all brokers receive data directly from the exchanges. There are few direct recipients of data feeds from the exchanges; for example, the larger, “upstream” brokers such as GAIN Capital, FXCM, and IG Markets.

Prices remain a significant cost for brokers, particularly for smaller, downstream ones whose CFDs profitability varies

According to the license agreements from all of the exchanges that we investigated, these downstream brokers must be disclosed and charged a fee (either monthly or annual) to receive the data feed.

So, provided that brokers adhere to the terms and conditions of the license agreements, there are avenues for the legitimate redistribution of data feeds throughout the industry.

However, while prices vary, they remain a significant cost for brokers, particularly for smaller, downstream brokers whose profitability derived from offering CFD products may vary. The following table provides an overview of real-time data pricing from a number of global exchanges. 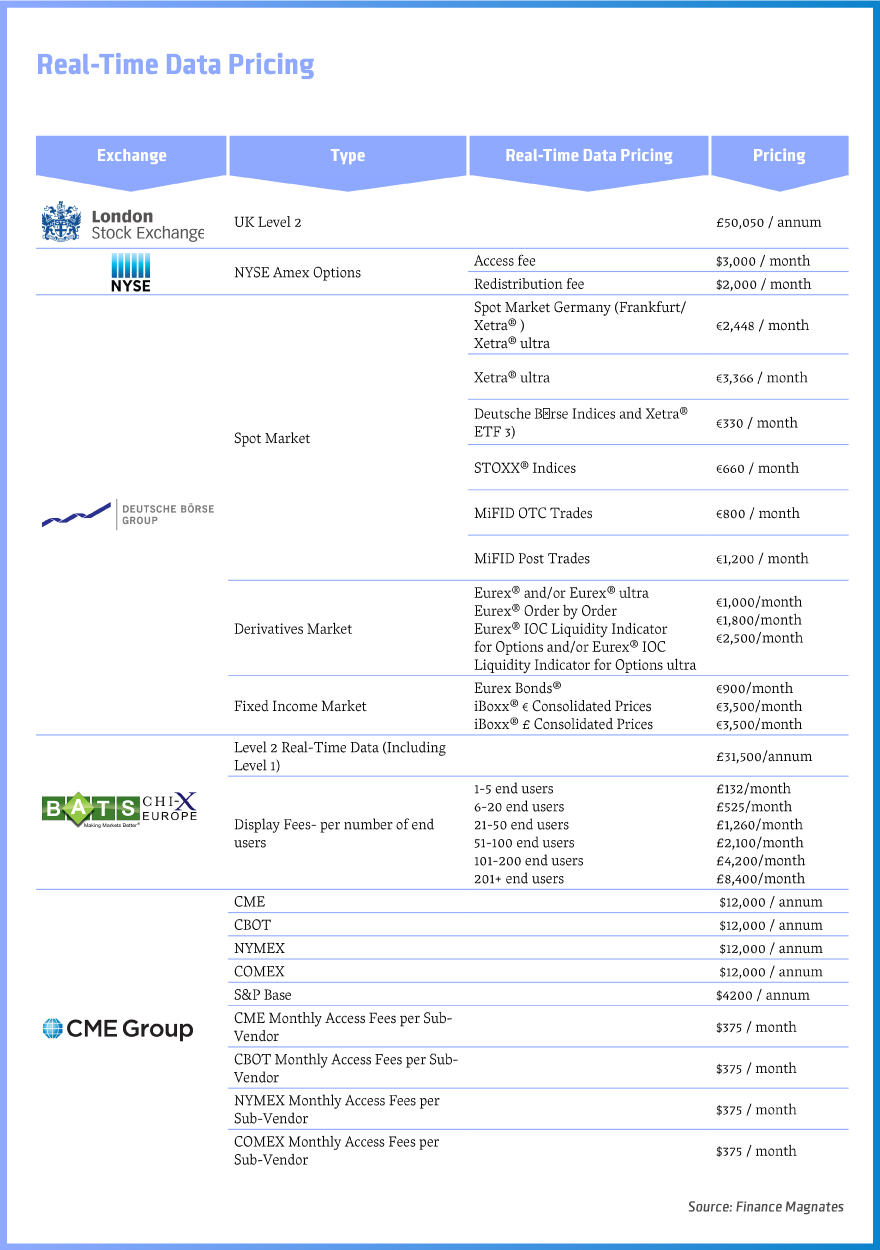 The further downstream you go, the murkier the water gets. It is widely acknowledged within the industry that a number of downstream brokers, typically domiciled in jurisdictions where regulation and enforcement are lax, are passing on data feeds without a license to do so, failing to disclose the fact or pay the associated redistribution fees.

According to one reputable senior executive from the margin trading industry, “The challenge is that you’re paying for that feed, but the individual you’re providing it to then passes it on to someone else.”

Naturally, the exchanges are taking notice; although most were reluctant to comment.

As the head of one liquidity provider notes, “Over the past 2-3 years, you’re starting to see the exchanges cracking down on how their fees are being disseminated throughout the OTC industry.”

The approach appears to be top-down, with exchanges approaching the direct recipients of their data feeds – the upstream brokers – in a bid to stamp out the issue. “They’re first going to the brokers – like FXCM, GAIN, Saxo – who have a license to distribute the feed and are trying to understand from them who is getting the feed and who is redistributing it,” he continues.

As another insider explains: “What will happen is the exchanges will start sending out email feelers to retail brokers that offer CFDs,” in which they solicit demos. It may happen that the exchange’s data feed is displayed on the broker’s trading platform, despite the fact that the broker is not paying to receive it.

Consequently, the exchange goes directly to the upstream brokers with the evidence, who, in turn, address the culprits (i.e. those brokers offering data feeds without a license). The distributors then demand the payment of fees or threaten to immediately terminate the feed.

They would rather risk angering clients than angering their upstream liquidity sources.

According to a senior industry participant, “The threat of paying large backdated fees or potential legal action means that downstream brokers immediately turn off their feeds. They would rather risk angering clients than angering their upstream liquidity sources.”

While information about legal action taken by exchanges is elusive, a number of sources mentioned that the exchanges are not hesitant to litigate. They described the fact that exchanges are going after brokers that are regulated in jurisdictions where there is a little bit more reciprocity in terms of their ability to seek legal recourse.

As one interviewee remarked: “You can make an analogy between the size of brokers they are going after and the legitimacy of the jurisdiction that they’re going after. In both cases, I think it can be described as a top-down approach.”

For downstream retail traders, this can potentially mean a black-out for quite a few instruments until or unless their brokers can find a work-around.

The question is, why do exchanges not package and price the data in such a way that smaller, downstream brokers can benefit from it? As one executive put it: “If these exchanges made their feeds more attractive to the downstream broker firms, then the broker firm would take that feed, pay that fixed cost, and clear the trades directly with the exchange.”

In fact, some exchanges, like the Deutsche Börse, do appear to offer a variety of data packages for various levels of various market segments. Indeed, it is in the interest of exchanges to make data available as the demand for CFD trading is growing rapidly.

But, as another senior executive elucidated, it may not be so simple. “The challenge is going to be that the exchange fees, when offset against the fact that these brokers are internalising the business and have no idea of what their profitability would be, become quite onerous because there is a possibility that you could lose money from the client flow and also have to pay the redistribution fee as well. So the industry is really looking for a solution that definitely has not come yet.”

A lot of these brokers are forced to internalise the risk and thus their profitability is going to depend on the success of their clients.

In fact, the relationship between the risk associated with CFD trading, its profitability and data feed expenses was highlighted repeatedly. Specifically, it was pointed out that many brokers that are offering CFDs are internalising the risk, acting as the counterparty to CFD trades – and some are losing money! The heavy losses sustained by both FXCM and GAIN Capital in H1 2015 were allegedly due to CFD trading, according to one source. While GAIN Capital’s results can be clearly attributed to falling equity index revenue capture, the situation is less clear at FXCM.

“The fact that there aren’t many viable options to pass the risk upstream means that a lot of these brokers are forced to internalise the risk and thus their profitability is going to depend on the success of their clients.”

However, it does appear that some brokers are finding ways to pass on their risk. The president and head of trading at one U.S. trading firm confirmed that it provides brokers with an outsourced B-book / dealing desk.

He adds: “Single stock CFDs are particularly difficult to manage when compared to index or commodity CFDs. Having said this, the benefits outweigh the risks as long as exposure is managed properly.”

In conclusion, he reminds us, “There is no such thing as a guarantee in this business.