E*TRADE Financial Corporation (NASDAQ: ETFC) has just reported its monthly metrics report for November 2016, which kept up with the pace of the rest of the industry, securing a robust gain in its DARTs. The figures also represent one of the brokerage’s best performances in 2016, according to an E*TRADE Financial report.

In terms of E*TRADE’s net new accounts, the group managed to secure an increase of 5,105 gross new accounts in November 2016 – while this figure reflects a continued account growth, it is slightly weaker when compared against the prior month. October 2016 had added 6,854 new accounts, which represents -28.6% MoM. 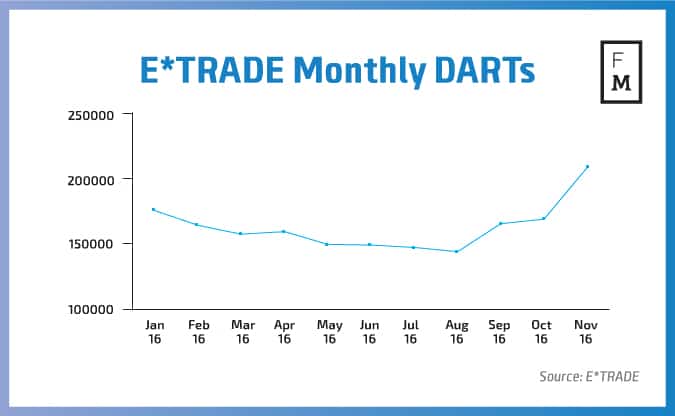 Moreover, the slowdown is even larger compared to November 2015, which saw 12,935 accounts added. The trend has been present at E*TRADE for the past several months now. In total however, this brings the company’s overall accounts to approximately 5.23 million in November 2016, up from 5.2 million in October 2016.