After announcing plans to expand its benchmark indices in January 2016, Tel Aviv Stock Exchange (TASE) announced today that the new indices methodology will be effective from 9th February, 2017.

During the past year, the detailed rules for the new index methodology have been approved and formulated based on extensive discussions with market activists, institutional investors and public companies. 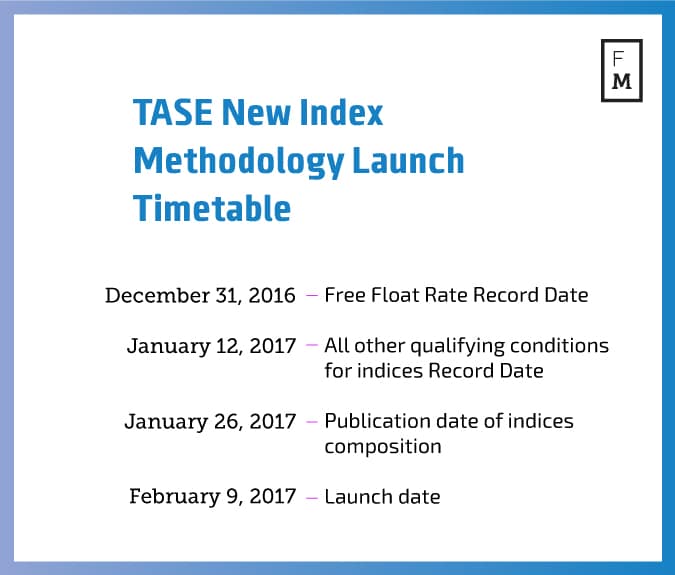 The weight cap on the TA-35, TA-125 and TA Banks-5 indices will be reduced gradually over a course of approximately six months (the “Transition Period”).

Prior to the launch, TASE will publish a full “Milestones Timetable”, which will be implemented during the Transition Period.

A proposal to cancel December 2016 indices update will also be discussed by TASE’s Board. This December, the indices composition were supposed to be updated according to the current indices rules but due to the closeness to the launch of the new index methodology, cancelling the December 2016 update is considered to be in the best interest of investors, indices trackers and traded companies.

The TASE board will discuss a proposal to reduce the minimum free float rate in the first two years following an IPO to just 20 percent to be included in flagship indices.

The change in the free float rate for “veteran” shares will be implemented gradually over a course of a year:

Commenting on today’s announcement, Robby Goldenberg, Senior Vice President, Head of Trading, Derivatives & Indices Department, said: “We consider the new index methodology, which will be implemented in about half a year, a major step, that among other things, will contribute to reducing market concentrations on the indices to the benefit of investors and public companies, and reduce exposure for index trackers, who manage NIS 35 billion in financial instruments based on TASE’s equity indices”.

Share this article
Tags: index / israel
Got a news tip? Let Us Know