Despite returned volatility at the beginning of December thanks to the Fed meeting early in the month, spot FX trading at Thomson Reuters barely grew last month. Overall, average daily volumes (ADV) of spot FX trading in December grew 1.1% to $91 billion from $90 billion in November. The figures reflect volumes from the FXall and Thomson Reuters Matching platforms. 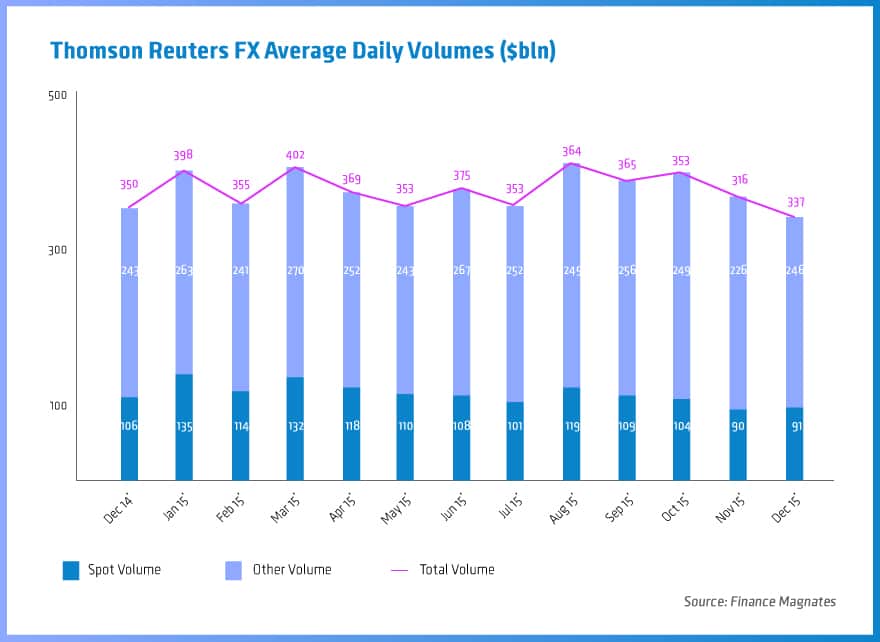 Nonetheless, even with increases in overall FX trading products, the growth for December at Thomson Reuters lagged behind other ECN venues. So far this month, Hotspot reported a 7.6% increase in month over month ADV for December 2015, while CME and FastMatch announced 30.4% and 13.1% growth respectively.

Looking ahead, it is worth watching the breakdown of spot FX versus ‘Other Volume’ activity. During December 2015, spot FX composed 27% of Thomson’s total volumes, which was the lowest since November 2013 when the firm began to provide a breakdown of its volumes. Helping boost their non-FX volumes has been growing demand for Asian currencies such as the Chinese yuan, of which NDFs compose a larger percentage of overall activity in these products.