When does a winning stock trade become a loser? When it is denominated in a devaluing foreign currency.

Always an issue when holding foreign equities, currency effects on stocks has become an increasingly important factor for US asset managers and traders since the US dollar began to strengthen in mid-2014 and has reached multi-year highs against the euro, pound and yen. For holders of foreign-denominated stocks, especially those valued in the euro and yen are susceptible to losses in dollar terms, even as their price in the local markets has risen.

Countering the dollar’s appreciation, in a report from Reuters, it was highlighted that many asset managers have taken to hedging currency risk of their foreign holdings. Hedging comes with additional costs, but in the ongoing bull market where European and Japanese stock indexes are at or near 52-week highs, the added expenses are more than covered by stock price gains. According to mutual fund data from Thomson Reuters owned Lipper, during 2015 alone $12.1 billion in assets were moved into ETFs that invest in foreign stocks but also hedge their holdings.

The demand for hedged foreign funds has driven an increase of such products being launched to meet investor interest. This trend was highlighted earlier in the year, as one of the largest providers of hedged ETFs, the Deutsche Borse, launched a dollar- denominated version of the MSCI EMU, an index which tracks 238 of the largest stocks across Belgium, Germany, Finland, France, Ireland, Italy, the Netherlands, Austria, Portugal and Spain. Offered for trade in Europe, the ETF provided local traders the ability to effectively trade their index, while benefitting from further declines in the euro versus the dollar.

In contrast to the EU, where non-euro-denominated ETFs offer additional gains on trades in the event of euro weakness, in the US the hedged currency funds provide investors with capital preservation in times of dollar strength. For example, iShares lists a US traded equivalent of the MSCI EMU index (symbol EZU) which has been available for over ten years. In September, the firm began to list a hedged version of the ETF, iShares Currency Hedged MSCI EMU (symbol HEZU). Since mid-October, the new ETF has rallied 26% compared to only 0% for the original unhedged version. The contrast in performance is tied to a 14% decline in the EUR/USD during the same period. 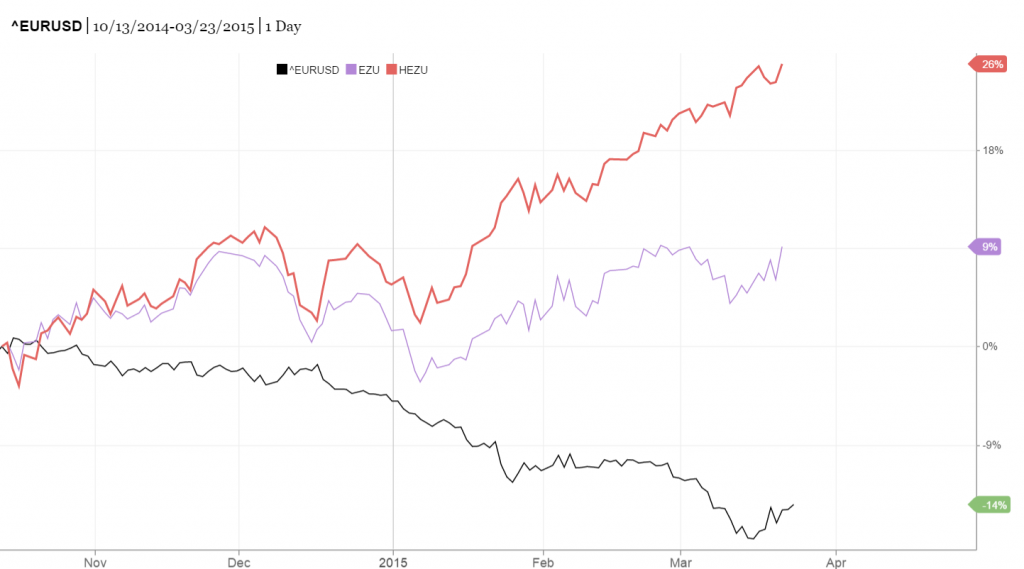 Share this article
Tags: dollar
Got a news tip? Let Us Know