KCG Holdings, Inc. (NYSE: KCG), a securities trading exchange, has reported its trading volumes for the month ending April 2016, which was able to avert a recent decline in its metrics, despite being unable to shake out of a tight consolidation that was established last month, according to a KCG statement.

During April 2016, KCG disclosed an average daily US equities market making figure of $26.0 billion traded, which was itself unchanged MoM relative to $26.0 billion back in March 2016. The latest volumes did however correlate to a YoY decline, reflective of a decline of -11.9% YoY from $29.5 billion in April 2015.

Furthermore, KCG’s total average daily shares traded during April 2016 came in at 5.0 billion shares, which was lower during the month by -2.0% MoM – this decline was mostly attributed to a differential in trading days during April, which numbered only 21.

At the time of writing, KCG share prices are still trading in the upper band of its recent uptrend that saw it peak at $14.12 last month. Since then, the share prices have given up the $14 handle, finding a strong level of support at $13.00 ahead of the US open Friday. 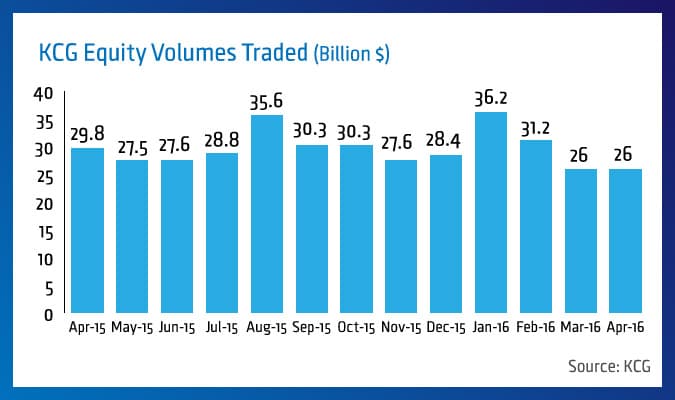 Share this article
Tags: equities / kcg
Got a news tip? Let Us Know