Intercontinental Exchange (NYSE: ICE), an international group of exchanges and clearing houses, has reported its latest tranche of monthly volumes for April 2016, having failed to allay last month’s decreases en route to another decline across its future business, according to an ICE statement.

In particular, April 2016 struck a very similar narrative in terms of ICE’s futures and options business compared to last month – average daily volume (ADV) came in at 4.6 million per day, which correlated to a loss of -8.2% MoM from 4.9 million contracts per day in March 2015, marking the third straight month the exchange has suffered sizable declines in this space.

By extension, over a yearly timetable, April 2016’s ADV managed to yield a double digit increase above its 2015 counterpart with a 15.0% YoY gain in volumes from just 4.0 million contracts in April 2015.

Furthermore, equity indices ADV on ICE came in at just 355,000 contracts per day in April 2016, witnessing an ascension of 78.3% MoM from just 199,000 in March 2016, completely erasing last month’s pullback. Depsite the optimism and latest strength, the figure still pales in comparison to April 2015, which saw an ADV of 626,000 contracts. 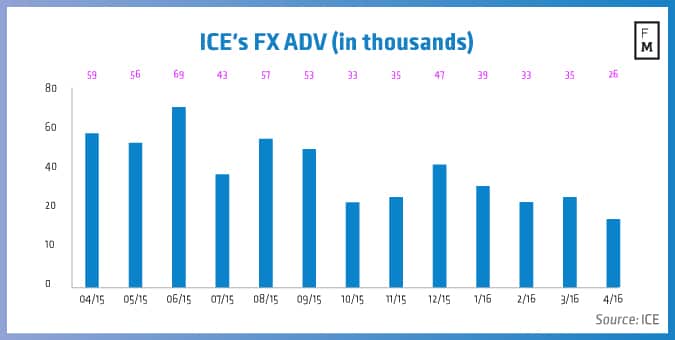