IntercontinentalExchange (ICE), a US listed commodities exchange has posted trading volumes for the month of August. The multi asset exchange saw trading metrics increase in energy and FX products.  The firm reported a 2% rise in trading volumes for August 2013, from a year earlier, average daily volume (ADV) for futures and options was 2,971,139 contracts. The exchanges total volume for August reached 65 million contracts, 1.5% lower than July figures.

Among its popular contracts is the Brent energy contract. The ICE exchange offers futures and options on the benchmark Brent contract. The UK oil contract saw trading volumes increase from a year earlier, in light of the uncertainty in the Middle East region. Brent futures traded 663,116 in August 2013, a 13% increase from 588,143 from a year earlier. Year to date the average daily volume has increased 8% from a year earlier, the oil markets have been affected by the on-going dispute in Syria however the recent issues in Egypt have an effect on the markets as the Suez Canal is used to transport a significant amount of oil between the Middle East and Europe.

Strong gains and continued volatility in the FX markets have been driving volumes at ICE’s FX segment. Volumes are up 60% from a year earlier, with average daily volume reaching 34,109 for August 2013, volumes for 2012 in the same month were 21,270. The firm operates regulated exchanges and clearing houses for energy, agricultural, credit, currency, emissions, and equity index products. 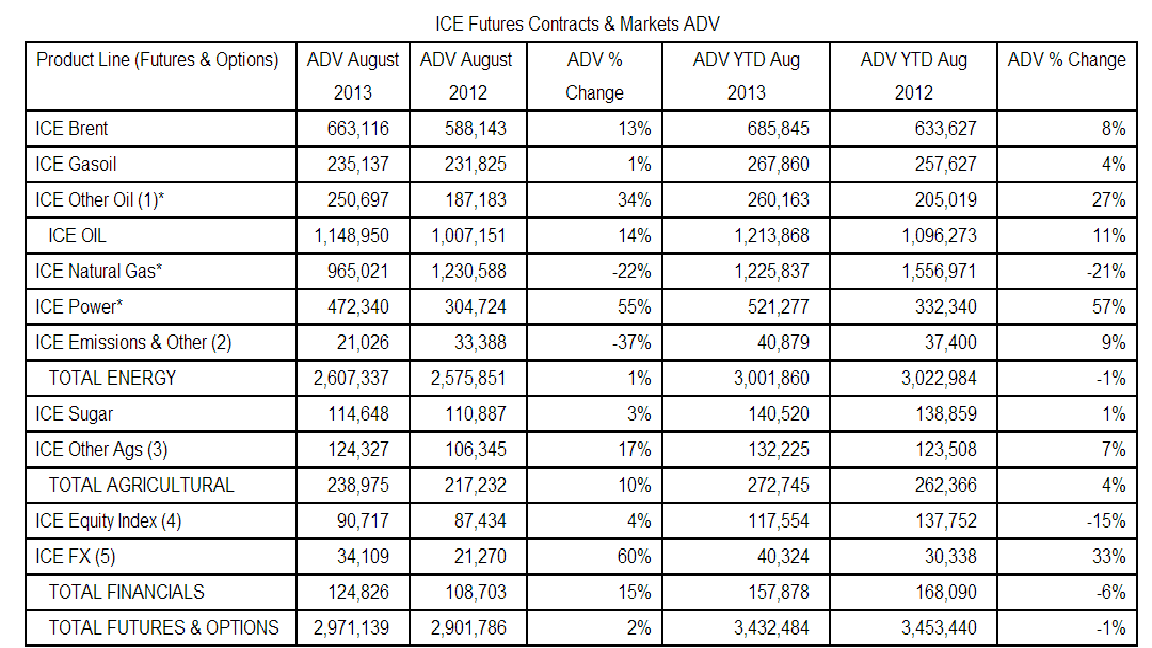 ICE has recently been in the headlines after the SEC sanctioned its proposed merger with NYSE Euronext. ICE put a bid for the US based exchange that runs New York Stock Exchange, the all-electronic NYSE Arca platform and NYSE MKT. ICE placed a bid of $8.2 billion.

ICE has made several notable acquisitions over the last decade, including; the International Petroleum Exchange (IPE) in 2001 and the Winnipeg Commodity Exchange (WCE) in 2007 to name a few.